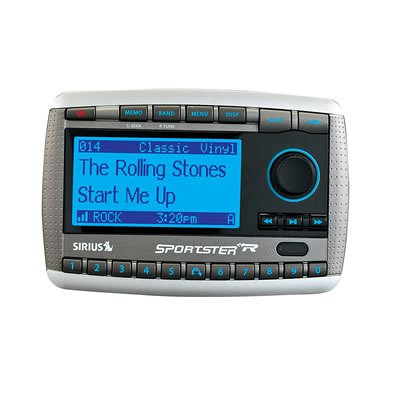 They seem to think quantity (of channels) somehow makes up for sound quality. Siirius is actually worse than XM in terms of data rates. Their sound quality is equivalent to a 32-64kbps MP3 file.

Honestly, both XM and Sirius will be in trouble if they don’t bump up their data rates once HD Radio begns to take off. It’s CD quality and free…

I agree itâ€™s a big improvement, but it should be sooooo much better (especially considering this is the fourth tryâ€¦)

The original had some sort of character to it, but wasnâ€™t very contemporary in the treatment of its details. The new one is the opposite; modern but completely bland.

I know itâ€™s a clichÃ© to say this, but just look at what strides the i-pod made for the industry. Iâ€™m not saying it should look like an i-pod, but it should be a piece of style that the user simply â€˜has to buyâ€™ â€“it should speak to the consumersâ€™ â€œwannahavitâ€ gene.

Do you have a subscription?

I’m not much of a radio guy, but I wonder what the numbers are on HD… with cities starting to have free wireless zones for internet, it seems odd to pay for radio, something that has always been free… but then I never listened to Howard Stern either, so I might be the minority here.

I could see someone older who drives a lot and doesn’t have an ipod. Both my parents love it. They get that mind numbing, candy coated 50’s station that makes anyone under 40 want to blow there brains out within 45 seconds.

With Pod casts and limewire, and 80 gigs to fill, a paid radio subscription just doesn’t fit into my life…

Do you have a subscription?

I have XM and will probably end up dropping it. My iPod sounds better…

another feature of sat. radio is that you do not roam between frequency areas. This is HUGE. With HD radio you still cannot do that. HD radio is a joke and it will enver take off. what is the point of it? who is going to spend that kind of money to get the same thing you get with your current radio?

sirius on the other hand, has content which was mentioned already, plus they have a television system in the works which will be ready for 2008 model vehicles, as well as a number of other features in development. One cool feature is that they are installing a gps navigation system into parking garages that will locate the closest open parking space. That alone is almost worth the 12 dollar subscription. I fuckign hate looking for parking spaces.

Since i subscribed to sirius a year ago, i hardly EVER use my ipod in the car or at work. The players now hold mp3’s AND you can listen to the stations, that sounds a hell of a lot better to me. The only downfall is that they don’t come in white, and I cant look cool on a subway or sidewalk, but i guess i could always buy some white headphones and pretend.

jesus christ.
as absurd as saying, “I dont need cable, I got dvds.”
apples and oranges.

but I don’t have cable… I have netflix.

For me, convenience is having all my music wherever I am and adding to it when I feel like it. 3.6 seconds to plug in for my 4 mile commute is worth it. Dropping my playlists and pod casts at work, on my bike, in the house, or in my garage…

I never liked talk radio. I get enough hot air on here… What I do like is pod casted.

In a way the ipd ruined radio for me. I usually listen on shuffle, or on a recent playlist, hear a song I like, then search artist and play their library, reminds of something else, switch to another artist or playlist, buy a couple songs, drop them into current playlists… I almost never just listen, except in the car or working out, but then I like to hear the playlists I’ve been building.

But the fact that numbers don’t lie is correct. Like I said, I might be in the current minority, but I can’t help but wonder what the age demographics is on the subscriptions… enjoy the 37 golden oldies stations…

im suprised to hear your views/response to this topic, knowing your profession and what goes into it as far as research analyzing etc.

Your comments are in perfect line with consumers who have no frame of reference and pick a view based on what they heard from another consumer who has no idea of what they are talking about. enjoy the 37 oldies stations? come on. You shouldn’t have such a closed mind.

What does age matter? Do you think its all elderly people buying into this new technology because its loaded with oldie stations?

You should have kept the “apples to crab apples” line, it was cute

Your right, I shouldn’t have let Deez get to me… it happens.

I’ve used the system (XM) in rental cars and when back at my folks place. Having spent some time with it, I get the impression users pick their favorite 4 or 5 stations and pretty much stick to it.

I wasn’t thinking so much of elderly, my stereotype was pretty much confined to baby boomers between 50 and 60, I guess that is what happens when your parents adopt a technology before you do

I think it’s just not for me… but I don’t even have cable TV so… I have this weird thing about paying for subscriptions, for some reason net flix gets past the ban.

we can all agree the design of the players need’s some love though right?

I think it is safe to say that no one buys satellite radio for the cool product design of the radio themselves.

Content is king, but as Yo has pointed out, user-control of the content is even more important. there are 7 million subscibers for XM radio, but Apple sold 32 million iPods last year. So there are 4 times as many people that like listening to content, but who want absolute control. Even satellite radio knows this, because they push the number of different channels they have as a big selling point, especially those niche stations (bluegrass, big band, stuff that isn’t on local radio). However, at the end of the day, with a radio the user is always surrendering their right to hear what they want.

As for HD radio, I don’t think that sound quality is what will allow it to re-conquer consumers, but rather the amount of content again. I know that WMNF radio in Florida and CBC in Canada are planning to launch multiple content streams with digital FM. In fact, I haven’t heard any laypersons talk about any other advantage of digital besides more content.

As for nation-wide listening, here people are working too. DRM is an intiative by shortwave stations and manufacturers to provide better sound quality (which is a serious problem with shortwave) while still maintaining the advantage of bouncing their signals through the atmosphere around the world:

Also, Uncle Sam is helping out by patenting “through the earth radio”. Of course, things that come out of Los Alomos don’t trickle down quickly. I’m still waiting for Mr. Fusion:

sat. radio is still an infant. It really only started to take off 2 years ago. Look at the growth numbers though.
Why compare sales from 2006. Of course apple sold more ipods.

In some borders stores they have installed listening stations that recommend music based on the artist you are listening to. It can search the database of the artist, find solo projects by band members, find artists with similar vocal styles, instrumentation, whatever. You can randomly grab 5 cd’s you’ve never heard of and be listening for hours, finding new stuff… it doesn’t have howard stern though, so you probably haven’t checked it out.

IF satellite moves toward this kind of ability, a virtual all access to something like the itunes store for a flat monthly fee, listen to what you want, that is interesting. It also remains to be seen.

We will see who goes there first. I’m sure it will happen fast. Users are getting accustomed to this kind of thing with Amazon and Net Flix being able to help predict what you might like.

now, if the next big step is allowing customizable “virtual playlists” and access to specific songs pulled from wifi and satellites, MP3s will go the way of CD players.

The control you were talking about in the previous page IS ALL storage. ESPECIALLY in the realm of comparing it to radio…

You were closer the first time.

And no, I don’t listen to Stern, too immature and vulgar. I have this weird thing about that. And subscriptions.

See, I was always told something about birds of a feather…

Anyway, maybe we will see something new come out of CES.

I think we all agree guys. Content control is where audio is converging. Whether it will be 10 tetrabyte iPods or remote accesible satellite radio or perhaps computer chips embedded in our rears, we don’t know.

A more interesting debate would be where is content creation going? YouTube was the story in late last year. There are so many musicians posting clips, funniest home videos, stupid pet tricks, etc. I think the most interesting product would be something to help people make and post content as well as choosing what they want to see and hear. Any thoughts?

Whoever the radio is coming from, XM, Sirius or through the internet, the most important feature will be being able to pause or rewind, just like Tivo.

Once you get used to Tivo normal TV seems ridiculous.

Since I got it I’ve often wished I could rewind something I missed listening to the radio in the car (or even in meetings…) Add that to being able to ‘thumbs up’ a track to buy it and download to a home harddrive and then you’ve outdated traditional ‘live’ radio once an for all.

Jeez, Deez, control is where it’s at.