Sirius bending over iPod in the near future

That thing is pretty nice! $359.00 is a little pricy, but with those options it just might be worth it. It dosen’t state the battery life…

Is that how it’s constantly recharging itself, by being docked into any of those units? I would just like to know the battery life if you were to take it traveling, like a flight somewhere for a weekend.

But other than that, I agree it is sweet!

it must plug into a wall. they would be stupid not to give the user that option.

right. you cant go for a jog and listen to live feed. but the other portable ones can, can’t they?

ive been holding out on getting one because i knew they would come out with new players. As of now, this will be my choice,unless i have to spend an assload of money on a car dock, office dock, home dock, ac adapter, etc…)

Not too excited with this. The idea of paying for radio is baffling to me, and the thing is larger than an Nano. A walkman is about $10, smaller than sirrius’s deal … and now sirius is adding comercials. Why bother?

On my computer a digital stream is recorded nightly and converted automatically to mp3, and then automatically updated to my ipod mini. Every night without me doing a thing, hours of music.

“the idea of paying for tv is baffling me”

Here’s an XM one that doesn’t look like a turd. 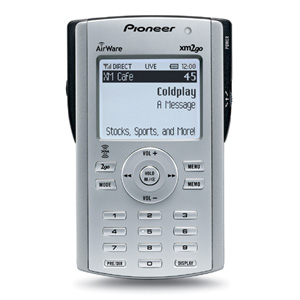 “and now they are adding commercials”

The only commercials are on Howard, and that is because the way his show is run, there needs to be some commercial time to get certain aspects of the show together. We are also not talking commercials like terr. radio either (every 20 mins)