since we're talking about Jordans...

I’m not sure if any of Brian Jungen’s artwork has been posted on here yet, but who cares. He’s been all over the Vancouver press lately because he has an exhibition opening in town this month. Anyhow here’s one site and some images I found, there’s plenty more on google. Cool stuff, peep it. 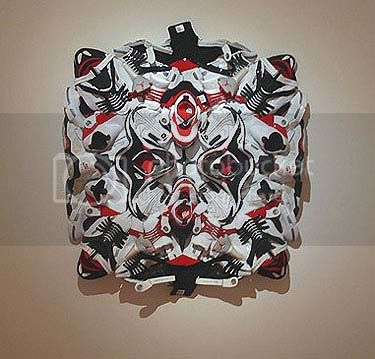 The work is mind-blowing. He’s been on the scene for a few years now at least, but doesn’t get the press he should stateside. The dino made out of lawn chairs, c’mon, its awesome, and the philosophy behind it all is pretty well thought out. I don’t agree with the philosophy totally, it yielded some beautiful and compelling work.

seen this stuff a while back, the masks are cool, havent seen the dino etc
whats the philosophy?

He is definitly getting some press now… I was killing some time at a Barnes and Noble and saw his work in about 3 magazine spreads. Cool stuff

Im curious about his philosophy too, what is it?

dino and some philo here. he’s my new hero.

oops, its a whale actually, the baseball bats are pretty hot too.