Need some design guide/spec help. Designing a couple of parts that slide together and lock in a similar fashion to a side release buckle like those on a backpack. Two side button lock the parts together and are pressed to release perpendicular to the direction of sliding movement.

First prototype from SLA 3D print were pretty lose and didn’t function as expected. I normally don’t work on such engineered components so only have the factory/supplier’s recommendations to go and would like to get some design and advice. 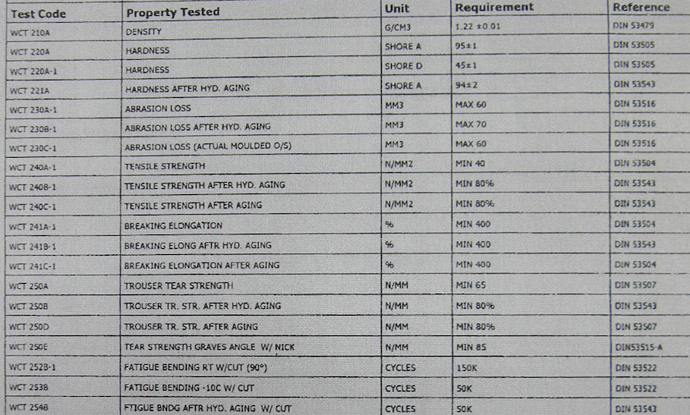 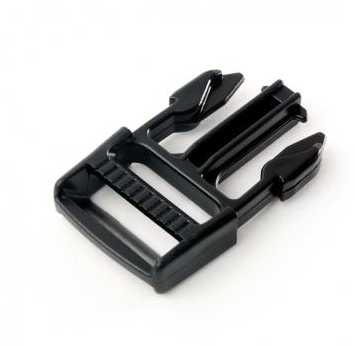 Stratasys has materials like “digital ABS” and “digital polypro”, which are not the real things but suitable facsimiles that have many of the properties of the real molded material.

The family/trade name for these parts are “fastex buckles”…look up ITW Fastex or ITW Nexus buckles. You might have some luck trying to contact an engineer here. Some of these things are pretty trick.

Thanks for the replies all.

As mentioned, I’m a bit out of my element on this. Had a friend of mine do up the CAD after working on the initial concept together. Application is “different”, let’s just say (curved, under load weight, assembled to other components made of various materials, not a strap thing, etc…). I don’t do CAD and deal very little with injection molding and any type of snap fasteners in my usual line of work. I’m in footwear…

I’ve been looking and taking photos of similar snaps, but so far nothing is 100% the same, though I try to steal as much as I can.

ABS? First I’ve had this suggested. Most seem to be POM or Nylon. Supplier recommended PEBAX. Why ABS?

Prototyping is going on in China with a supplier who doesn’t have much experience with the process. Just getting them to understand the difference between SLA and SLS took a while. Any kind of specialty 3D print material I think I’ll have little luck communicating or be able to use. That said, might bring prototyping back to NA if need be if supplier in China pushes against us and isn’t cooperative. Transparent in 3D print is not important however, only final part.

Keep the suggestions coming. Very much appreciated! Wish I could share more. Will be an exciting project when it finally launches in a year or so!

Ideally you want something with low friction, impact resistance and flexibility without fracturing. That’s why Nylon or PEBAX.
China is usually not good with RPs. They like to machine everything. I believe buying the expensive RP material is cost-prohibitive over there.

FEA is optional and later down the road. Sure you can get it to work on your prototypes but how many cycle times will it last? What about the load bearing aspect. At the end you may want some re-assurance that you won’t have to recall thousands of products due to a faulty buckle. Also make sure the factory doesn’t change the final material at the end.

Best bet is to do multiple iterations and send them out. You can always file or mod your parts to make them fit/snap, that’s what we do in-house til we get it right. Find an RP house that has polypropylene like materials or even nylon. SLA and Polyjet technologies have their own versions of flexible materials.

ABS is cheap and shrinkage control is easy for your tooling guys. The recommendations seem to be on the spendy end of the scale.

As for designing the part, why not just hire a guy and bill back at +20%? Seems you would more than enough time to justify the cost.

And are you in China? Plenty of English speaking RP houses who can print a good part. I have used star prototype. Nice folks. Otherwise, if you are in NA, why would you go through the hassle of getting a small part in China while you are still evaluating the design? Get a guy down the street who will print the part and have it available the morning after you sent the file. A small snap would run me about $20 in the accura clear. And I use than material whether the clarity is needed or not. Like I wrote, flexes well, detail is outstanding and cheap.

OK. finally getting somewhere… We’ve come to a compromise on the geometry to move forward that looks like it will work. Basically just thickening up and shortening the arms (Also proposed a few different variations of mechanisms but supplier felt most similar to current was easiest).

Looking at materials now and have narrowed down for function (snap function, click sound and strength) and aesthetic (crystal clear if possible) to either POM (Delrin or similar) or ABS. Supplier was pushing Pebax but I think is too soft. Nylon is good but not transparent.

I’m in NA but my development partner is in China working with the supplier. He’s looking into what we can 3D print to match the above materials more closely. Dunno if there are specific material types I can ask for that would be available in China.

If need be will bring 3D printing/CNCing back to NA, but would be easiest to get it all done there concurrent with other parts in development and the mold maker for final parts.

McMaster Carr sells solid chunks of both ABS and Acetal (Delrin) in sizes of up to 24"x24"x4".

However, I’ve had many prototypes of plastic parts CNC’ed in China from solid chunks of ABS, so I’m surprised your Chinese vendor can’t source something. While not the exact same as injection molded parts, its nice to test parts in their final production resin vs a 3D print material that only claims to be LIKE the final material.

Just get an stl file from your cad guy.

Email it to Roy, roy at buildparts dot com .

Ask for a quote in the Accura ClearVue. They ship worldwide.

Going through contortions to get a machined part seems silly to me. The printed part will have nearly the same qualities as ABS or acetyl (but but the lubriciousness of acetyl) and will function as a snap. What do you have, maybe 1mm of deflection on a 10-15mm arm? Should not be a problem.

And on a side note, I like to say “lubricious”.

You guys are a great resource. Thanks!

Anyone can comment on ABS vs. Delrin for the application? ABS I would guess in cheaper, not sure about other physical properties or transparency.

IAB, is Accura Clear Vue similar in physical properties to ABS/Acetal? If I don’t need the SLA transparent, is there another material you’d suggest?

I made an LCD screen cover from ABS. Clear as clear can be. Even had Protomold make the mud tool. Looked great, other than the ejector pin marks. But what do you expect from a $3000 tool.

Never spec-ed delrin. Has such a nice feel when you rub two parts together. I do think the ABS will give you a more audible snap. Assuming it is a small part, shrinkage won’t be much of an issue. Have them run it in both resins before you finalize the spec.

Accura White is an alternative to the clear. But if your printer has the white, they will have the clear.

Again, I’m assuming this part is no larger than a quarter. Since it is small, I would steer clear of any FDM process, you will not have the needed resolution and it will interfere with the functionality of a small spring clip. You need to stick with the resolution of an SLA. If your printer doesn’t have the Accura resins, ask what they have that will flex similar to ABS. Maybe you get lucky.

If you want to simulate delrin, sand the parts smooth, spray with a silicone spray. ABS will bite slightly harder than delrin.

Any particular reason you don’t run the part in NA and evaluate it yourself?

Also, with machining, again an assumption, but I would think you would have a 1mm wall. Hard to machine something that thin with such a low melting temperature. A block of nylon may hold up to the stress a bit better, but then again, maybe not.

Unfortunately that is very typical of Asian factories. You are at the mercy of their knowledge and network. They will not say they don’t know but rather say it can’t be done. Anything can be done in Asia, your development partner just has to do the legwork and find the correct suppliers.
There are plenty of RP houses in Asia to choose from like Star Rapid - Low-Volume Manufacturing & Prototyping http://www.rpprototype.com/ to name a couple but it is up to your partner to convince and educate your supplier. Browse their websites and you can see the list of materials they can RP or machine.
Like iab said, prototype them in NA, work out all the bugs and then send it back to Asia. It will be more expensive but the alternative is to convince your supplier to try something new to them…even if it’s a simple as machining raw material. We just had 2 pieces that are like 16"x 22" out of plastic in Asia. It was way cheaper than RPing them in the US.
Accura Materials or Polyjet materials will do the job. Just don’t expect them to behave exactly like molded parts. After all they are created using an additive process so they will always be more fragile. Talk to the RP houses and see what materials they will recommend.

We’ve previously completed several rounds of 3D printing (never quite the right material, but a big improvement on first SLA protos). Molds have been opened, and revised a few times to adjust the length/cross-section of the snap arms. We’ve tested a few materials, but are still in the process of testing more.

Difficulty is I’m relying on the factory experience to provide material selection and mold revision advice. It’s going a bit slower than I had hoped. Factory is very experienced in tooling and injection of high end engineering components of similar complexity and function (they do the majority of snowboard binding components for most top end brands).

This part is a bit different than their normal parts however and unique in design, so not something we can follow an existing spec (aside from the side buckle samples I previously posted).

Not sure if there also might be some sort of plastics broker I could speak with for recommendations and have knowledge of different materials from different companies. Trial and production is in Asia. I’m not 100% sure how we would arrange production material and what suppliers the fty buys from. I just need advice and a starting point to get the parts to work at this point.

Happy to also chat to anyone offline who might be able to help. 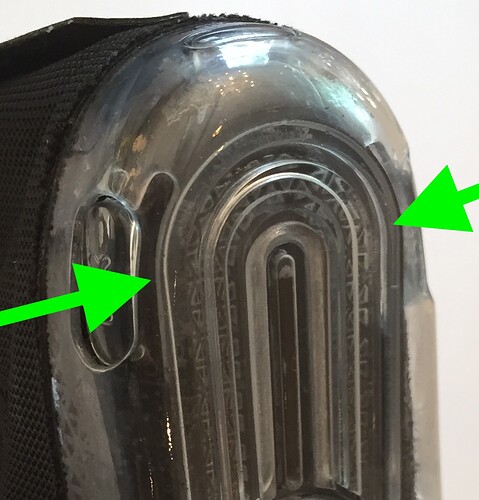 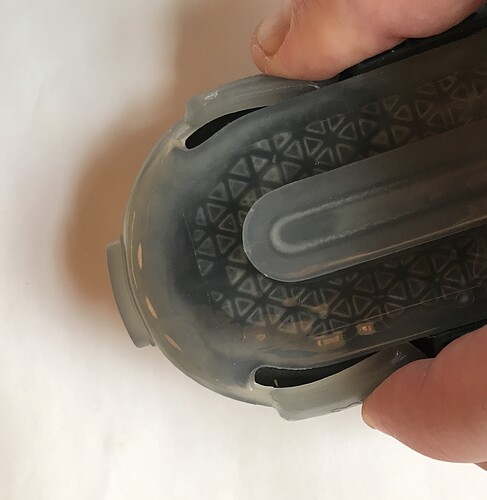 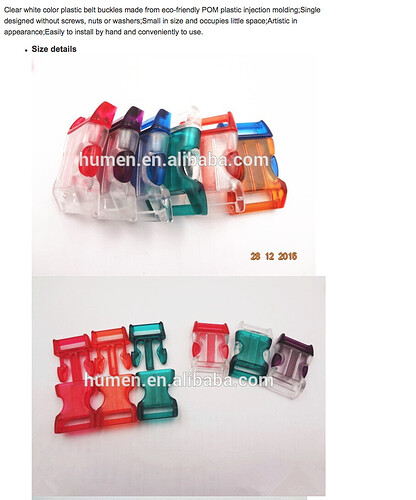 I wonder if Tritan might be a candidate material. Definitely meets the need for transparency and it can take colors/ tints well.

You can click through the examples on this page.

Small part so maybe polycarbonate would be “affordable”. Clear, tintable, stiff but twice the cost of PP. Easy to get a 10-pound sample bag to do a run.

Should be stiffer than the nylon and more dimensionally stable over the PP and TPU.

Thanks all for the advice. Any additional advice in speaking to a plastics rep or broker? Trying to contact some of the companies directly BASF, Eastman, SABIC, but varying degrees of success…

PM’d you back. Thanks.

This woman did an IDSA webinar last year. It was rather short on usable content, but in any event she is responsible for working with designers and other ‘creatives’ and could potentially answer questions about Eastman materials.