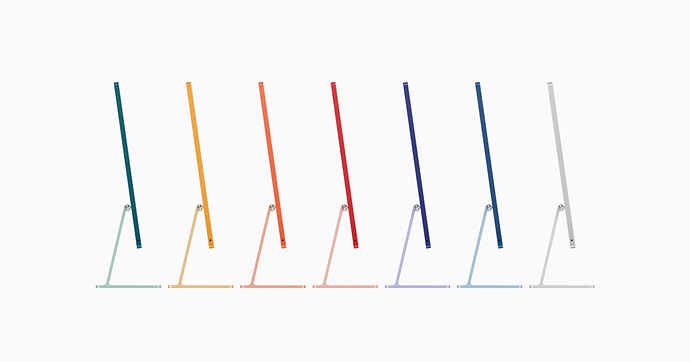 I wish they had the stones to omit the overt Apple logo on the front, for maximum purity. Seriously, is that needed? Does anyone still question who the manufacturer is?

My dream Christmas would include a widescreen Cintiq that looked and felt like this.

I like the logo there. I think it is a pretty awesome refinement. Really, no other company should touch the simple radiused rectangle for the next decade. All it does is support Apple as a the top dog in the category.

I think it’s spectacular. The hump on the back will be interesting to see in person. I wish the stand was slightly thinner though. Some view it looks thicker than the edge… 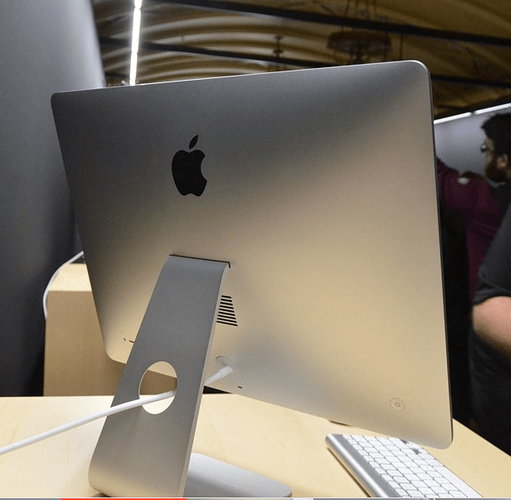 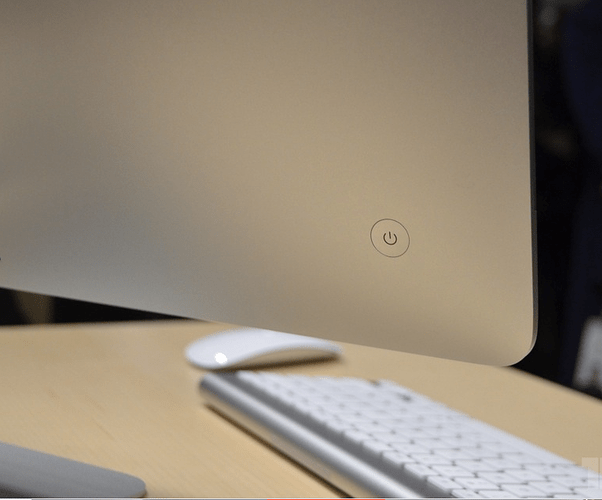 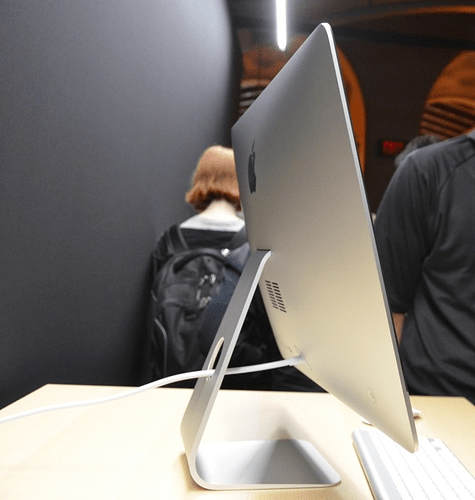 Die-cast, then machined? Or Liquid-Metal cast (whatever that is…)

Its a deceptively simple surface, that back side, isn’t it. It manages to hide the bulk and look slender and elemental.

@yo - who, or what discipline at Apple do you think would be the biggest proponent of the logo on the user-side? When there is an even larger Apple on the back? Formally, I think the black Apple on the backside serves to balance and anchor the unbroken mass of the back panel, but as the front is dominated by the screen and black glass rectangle, the logo seems at this point in 2012…well…arbitrary. I can’t help imagining a struggle between the design and marketing factions on whether to add or omit the logo.

I think it’s about time for me to finally upgrade

Don’t mind the front logo. Think it’s good subtle branding to remind you and everyone who walks by your desk that that beauty is a Mac. Not like there won’t be tons of hp or whatever knockoffs…

Think the rear logo should light up. Easy/free feature using the LCD light and on the old PowerBooks was kinda neat. Esp. If it “breathed”
Like the old power lights.

That front logo would benefit from being just recessed in the material - no color contrast - it would be subtle, wouldn’t compete with the screen content and wouldn’t shout brand like a NASCAR.

Yes this is sick looking. The biggest jump from any of the previous models. It is easy to see how working on the ipad has helped them in other categories.

Unfortunately, analog doesn’t change so fast, so you have that big buldge where the stand and socket are.

The logo has always been an eyesore, why so big on the front?
It is one of the things that always seemed to be a little bit un-braun like about apple of late. Along with the mirror print logo on the iphone 4.

@slippyfish, you brought up a good point, they are starting off with a fat block of aluminum to get to that form. That is a lot of work (electricity).

Logo really isn’t so big. Smaller would be out of proportion. While apple is apple branding is still important.

I’m more surprised they didn’t do the whole front black glass. Would make it even more like the iPhone. Black rear metal would be pretty tight too. Very slimming and no issue of scratching on a desktop.

anodized black would be pretty nice!

One of my pet peeves of the previous aluminum iMacs was the seam on the sides and bottom. You have to get up close to notice it, but it just breaks the cleanliness of the design.

To me the front logo actually feels a bit smaller, although it’s probably identical to the old one. I’m just amazed at that back surface. I’m amazed at the sense of refinement Apple’s designers have to make things so unbelievably potent with such subtle changes.

Apple (placed at the centre of the screen or part of screen/screen guard) is visible, when it is not ON…

Looks great, is it higher resolution than previous models? At least it doesn’t say iMac under the screen.

I’m not really that amazed by it. They do the deceptive marketing trick of taking photos at that angle…by that definition if you look at me from the back I have a 6 pack and chiseled abs, until you rotate around and see my beer belly.

Thinness is great on mobile devices, but on something that sits on a desk with a stand, the footprint is defined by that bounding box so you don’t get any real benefit other than it being slightly cooler than the last generation.

Does it run Excel? I hope it does.

This is thin too. Wow.

anodized black would be pretty nice!

Interesting. I really didn’t like the black rear of the previous iMacs. It looked like a cheap compromise. I’m glad they don’t have to compromise anymore.

The black back is from 2 generations ago. I have the last gen iMac at work… Aluminum back. Beautiful.