Should I sell my Cintiq for an Ipad2?

I purchased a 12WX a few months ago along with Sketchbook Pro. Have hardly used it at all but it’s nice to do sketches on it every once in a while. At $1000, it’s a pricey toy for me.

Since I’m in business meetings all the time and need to take good notes and the fact that it would be nice to sketch digitally in front of clients, I’m thinking about an Ipad2 with the new Wacom stylus and Sketchbook App. I know it’s not the same sensitivity that I have with the Cintiq.

Just wondering what your suggestions would be. I’m guessing I could sell the Wacom for around $750 or 800, which would essentially pay for the Ipad.

That’s the path I’m taking. I too thought a Cintiq would be the thing to get, but I’ve been putting it off until the price dropped a bit more. Word on the street is that there will be something coming out from Wacom in the next several months that will be more along the lines of what the iPad is. This is just a guess, mind you since Wacom currently supplies interactive displays for OEMs (like HP I think?). I’ve seen some video demos of folks using the HP TouchSmart tm2 Tablet PC in the same way you would a Cintiq.

The main advantage I see with these deices is that by using the special stylus, your hand/pinkie doesn’t give false touches. I believe with the HP the touchscreen is “locked out” by the stylus to avoid this (but I could be wrong here). In the case of the iPad, you have to deal with the multitouch all the time–which can be a good and a bad thing. If you use a stylus like a Pogo or a Boxwave (which gives you better-but not perfect) precision, you have to keep you hands off the screen. This makes drawing kinda awkward unless you use a fingerless glove. I’ve ended up using these black wool glove liners from REI: http://www.rei.com/product/755628/smartwool-liner-gloves I’ve just cut off all but the pinkie and sewed up the ends so they don’t ravel.

The nice thing about the iPad is that with your other hand you can instantly pinch-zoom the image as you’re drawing and version 2.0 of SBP for the iPad has added a lot of the functionality that’s in the full version. But not all of it, so you’ll want to try it out first.

The other trick I’ve been experimenting with is using a cool iPad app called AirDisplay that let’s you expand your desktop onto your iPad. This is really cool and I’ve been playing with running SBP on my PC and dragging a sketch window onto my iPad to sketch. I have a Wacom Bamboo, but really like drawing directly on the image. This is as close to what you probably have with the Cintiq (which, as i mentioned, I don’t own). This solution can be a bit laggy since you’re sharing the desktop over WiFi, but it’s still pretty cool.

So far my favorite way of working is just using SBP 2.0 for the iPad. It’s pretty fast and intuitive and the improvements with ver 2.0 are significant. The most important one to me is the increase in resolution from 1024x768 to 2048x1536 which is only available with the iPad2. This makes the sketches a lot more useful.

So is it a Cintiq killer? Not sure as I’m still experimenting with it and I’m waiting for my new iPad2 (I’ll sell the gen 1 on ebay). But there’s a lot of utility in the iPad that makes it a great business tool. I go to client meeting with just my iPad now as it lets me sketch, show my portfolio, do e-mail, web browsing, etc. Who knows what Wacom will come out with, but it probably won’t be a fully functional device like the iPad.

Personally I would find a lot more value out of something like the new Asus Eee Slate. Something thats a dedicated PC that can use a proper pressure sensitive pen and run Sketchbook.

But that’s just me.

Personally I would find a lot more value out of something like the new Asus Eee Slate. Something thats a dedicated PC that can use a proper pressure sensitive pen and run Sketchbook.

But that’s just me.

Yeah, I’ve been looking into that as well and frankly, in a year or two that’s what we all might be using instead of a bulky PC. They’re a bit too new right now and I want to see which products shake out as having the best quality.

Asus build stuff in general is usually pretty good. I was pretty happy with my Toshiba Tablet PC in college. I tried the 12WX Cintiq for a while but just could not get used to it. The big wire dongle made it a pain to rotate a full 180 and I was always still tethered to something.

Asus build stuff in general is usually pretty good. I was pretty happy with my Toshiba Tablet PC in college. I tried the 12WX Cintiq for a while but just could not get used to it. The big wire dongle made it a pain to rotate a full 180 and I was always still tethered to something.

That’s my big issue as well: the cord. But that thing came out years ago and since then batteries and displays have come so far that I can’t imagine Wacom won’t eventually come out with its own wireless tablet-like device. But by that time there might be too much competition from more powerful (and useful) solutions.

The problem I see is this:

Even without any computing power built in, the 12WX is $1000

With a full up i5 CPU, a Wacom digitizer, and all the other wireless bells and whistle the 32 gig Eee Slate is the same price.

By the time Wacom managed to bundle WiDi (which would still require a wireless transmitter on the PC side, and those are selling for around $250 for standalone kits these days) and a battery, you’d probably manage paying at least $1500 not including the PC needed to run it.

Wacom knows Cintiqs are super niche and can charge the premiums for it, but they make less and less sense.

I also have a Cintiq, but just ordered a iPad2… looking forward to checking it out. I hear you Cyber on the Eee Slate… I just can’t go PC.

I also have a Cintiq, but just ordered a iPad2… looking forward to checking it out. I hear you Cyber on the Eee Slate… I just can’t go PC.

Just find yourself a nerd and go hackintosh. 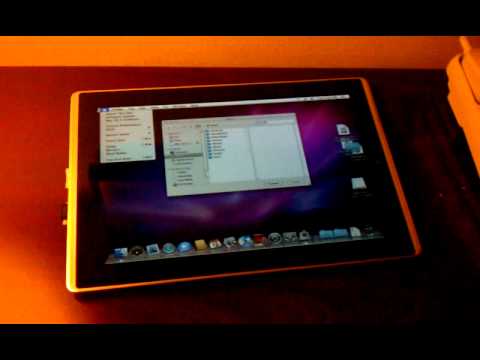 an intern in the office just bought an Asus slate - it’s nice! has an i5 processor and 4gb, touch and wacom digitizer, and a nice sleek look and build. I have a 3 year old x60 convertible that works fine, but I irrationally want one!

I’d say the Slate would be more versatile for you, but some people really want ipads

if you go that route, a loose friend has been doing some nice drawings with a program called ArtStudio. On his blog he was saying it’s controls are a little better… he’s doing nice work on it too

*Warren, you might know him… he’s a friend of Vince F

this is one of Chip’s using another app called ‘notify’