Should I get a MakerBot?

I’m getting close to graduating, and as I’m about to strike out on my own I’ve been thinking about what tools I’ll need to continue to grow my skills and to have what I need for the occasional freelance clients that may hire me. I’ve always liked 3d printing technology and have been impressed with the new MakerBot Replicator. I guess my question is do you think getting a desktop 3d printer helps you enough with your designs to justify the price? I feel that being able to easily print whenever I want without having to place an order at the school/fabrication firm would give me much more flexibility with refining my form and human factors when compared to the blue foam models I’m making now. Do you think the benefit is worth the cost for a young individual designer? I am just graduating from school, but I don’t have any student loans and I have a little money saved up. I don’t want to waste it if it won’t be that useful to me, but I am willing to make the investment if it would help me in the long run.

I think it would be cool to have one, but depends on how much freelance work you think you’ll be doing and also the size of your objects. If you want to do small consumer products then it might be cool. Not so cool for furniture, point of purchase, footwear etc…

I would like one, but I think if I had the urge I’d just go to shapeways or use sculpey/foam/mdf/modelling clay.

This site is cool and maybe worth checking out: http://everythingimakewithmymakerbot.com/

I don’t know if the fidelity of the makerbot is high enough to make it a proper design tool over just an exploratory toy.

It also depends on the build volume you need.

In reality, saving the money and putting it towards proper SLA/FDM models would probably be more advantageous than the makerbot.

The makerbot is still a toy - there’s no other way to say it. The size of objects that it can build are tiny and the resolution (size of build layers) is only adequate for proofs.

I’d wait 5 years, you’ll be amazed at what the ‘state of 3D printers’ will be like…in the meantime, buying Rhino and a seat of SolidWorks might be a much better investment.

Thanks for the advice guys. That it’s more of a toy than a tool is kind of what I was afraid of. I guess I am better of waiting a few years for the print size and resolution to increase as I get more established.

I was looking at the pricing for Solidworks and I was kind of confused. There is both a licence and a subscription price listed. do you buy it at the licence price and then pay the subscription to upgrade? do you pay it up front? or are they two separate plans?

You pay the license once, and the subscription fee annually. The subscription gets you access to new versions and service packs, as well as tech support. I’ve contacted tech support twice in the last decade, internet forums have made it obsolete. You should also take a look at Alibre. I don’t know that I would buy SW today if I didn’t already have it.

Thanks, do you have to pay the subscription the first year or can you wait until you need to upgrade? Also with Solidworks becoming the industry standard, would getting a cheaper off brand CAD package come back to bite me when it comes to collaboration and file types? or do you think it would be pretty easy to get away with?

in my opinion makerbot this is a toy. seems to me that it is not worth

I have two, a 3mm mk6 and a 1.75mm mk7 thing-o-matic. I also have a Fab@home machine (good movement, bad at making stuff), a Lumin Lab CNC (do not buy they suck), and I just go in a Bits From Bytes Touch 3D. The BFB machine is nice. I want to check out an Ultimaker and the Replicator from Makerbot. I want my office to get a Objet but no dice on that front yet. Another machine to look at is this new PrintR Printr Bot I’d like to take what I have learned and make a stupidly large printer in my garage, not quite as large as a D-Shape http://d-shape.com/ but big.

I have two, a 3mm mk6 and a 1.75mm mk7 thing-o-matic. I also have a Fab@home machine (good movement, bad at making stuff), a Lumin Lab CNC (do not buy they suck), and I just go in a Bits From Bytes Touch 3D. The BFB machine is nice. I want to check out an Ultimaker and the Replicator from Makerbot. I want my office to get a Objet but no dice on that front yet. Another machine to look at is this new PrintR Printr Bot I’d like to take what I have learned and make a stupidly large printer in my garage, not quite as large as a D-Shape http://d-shape.com/ but big.

Wow, that’s quite a lot of equipment you’ve tested. Objet is truly amazing. The results are gorgeous (though fragile in many ways), but for hobbyist or freelance work, it’s simply not on the map (to own one, that is). Even that PrinRbot seems too crude for surfacing work.

However (and this is lifted from another thread), I’d be very interested to hear about your opinion regarding this: http://www.indiegogo.com/veloso3dprinter?c=home&a=546899

Are the results too good to be true?

That looks rad. I would not buy the first wave or probably the first generation. Ther build area is small, and it is more or less SLA. $150/Kilo for material is a lot cheaper then SLA machines (about $2000/ US Gal last I checked). It looks cool but the upkeep and limited use are problems. I use my machines for rough prototypes and investments (lost investment casting). The thing I really hope they make open or cheap is their software, it appears to work like real loaders! I use to use a dimensions SSt machine, the loading software was pretty nice compared to the Skienfordge for makerbots.

The MakerBot is capable of creating pretty nice models IF you are patient and turn the resolution up. I have things printed at 0.15mm layer height sitting on my desk that are as good, if not better than what I was getting from commercial machines a few years back.

The current quality and speed king is the Ultimaker which is the same price as the Makerbot. People have printed at 0.02mm layer height with infill at 0.04mm (no typo, thats 20 microns and 40 microns). The prints I saw were absolutely incredible. Of course printing at that type of resolution is also going to take forever, but the Ultimaker is capable of printing at up to 400mm per second. 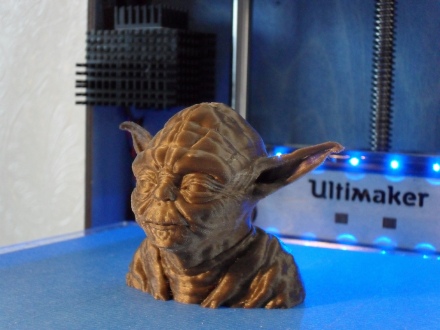 Ultimaker FAQ: but what about the quality of prints?

A lot of the press that Ultimaker has gotten has been about the crazy speeds these machines can print at. That press is pretty well-deserved, IMO, because they can indeed move very, very fast. Scar…

There are a whole bunch of low cost machines like the Solidoodle ($500) that are just about to be released, and 3D systems is taking orders for their Cubify(.com) ($1300). The UP printer is pretty capable if you are willing to futzz with it a bit ($1500). http://pp3dp.com/

If you want a low cost kit, the best looking machine at the moment is the MakerSlide based ORD bot, built from custom designed 80-20 extrusions and aluminum plate. THe machine should be capable of pretty nice prints, but it is still beta. In the next year or so there are going to be some really nice commercial machines with decent print envelopes, speed and resolution for around $1k.