A buddy of mine did consulting on some of these (he couldn’t tell me much). Very nice. 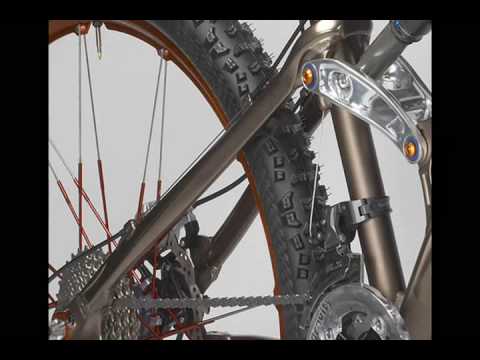 I’ve got to add (inspired by the Cargo Bike theme on the front page) the Surly Big Dummy.

Surly worked with the company Xtracycle to develop a “long-bike” based on their popular “Free Radical” frame extension/cargo system. You would think that riding one would be similar to riding a tandem with no stoker, but it’s a very stable maneuverable bike, even in traffic. I’ve seen many things hauled on these. The coolest is several people who have bolted on car roof mounted bike carriers to the “outriggers” and carried multiple bikes. Use the Dummy to get your race bike to the race, dominate, ride home. Done.

It’s quickly become one of my all time favorites. I do confess a soft spot for Surly since I know a few people who work there, but I still say they make some great products. Nothing too fancy, just bikes that work when you need them to. 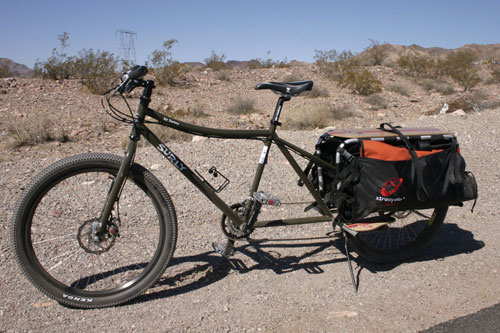 Even fun for the kids! 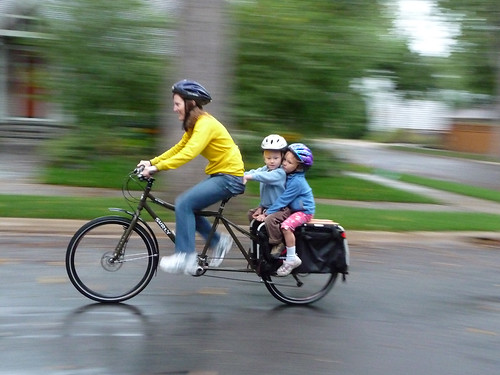 A buddy of mine did consulting on some of these (he couldn’t tell me much). Very nice.

Yikes- Internal cable routing? Finally, carbon fiber allows from to triumph over function. There’s no better way to make every mechanic you see hate you (unless you buy one mail order and ask him to build it up). You want cable drag? We can give you cable drag…

There are some freakishly hideous bikes in there (apologies to your friend). In trying to grow, the brand is losing it’s direction… They used to be a high-quality, American-made Specialized (from who they license their basic suspension design). Now they’re just another company trying to hold on to their “premium” reputation ordering slightly different frames from the same Taiwanese factories as everyone else.

If you’re going to spend the money on a “premium” bike, at least get something interesting, like an Ibis, Pivot (designed by Titus’ founder), Maverick, Foes or hand built, like an Ellsworth or Erikson… Otherwise, go for a Giant (Their Maestro bikes are some of the best I’ve ridden, regardless of price).

I’m sure they make you run GORE cables! Their EXO frame was … interesting, but I’ve never really been a huge Titus fan. Always one of those brands that made me say, “Oh there’s a Titus well I can check that off my list of things to see.”

I’m sure they make you run GORE cables! Their EXO frame was … interesting, but I’ve never really been a huge Titus fan. Always one of those brands that made me say, “Oh there’s a Titus well I can check that off my list of things to see.”

That would be the sensible thing to do, but you’d be amazed at how many high-end bike customers won’t spend $30 on XTR cables, let alone GORE… Plus, there will be loads of compression, no matter the cables- that’s a lot of housing…

I’m excited to see Gore cables back, having run them in the mid-90’s… They come with SRAM’s RED shifters, on account of the under-the-tape shift cable routing’s added drag. I’ve been using them for over a year and mine still feel pretty good. Still, on a mountain bike, a set of XTR cables (nice sealed ferrules), split cable stops and bottle of non-dirt-attracting White Lightning seem the best option.

Of course, I had to install a set of semi-sealed SID Blue Jagwire Ripcords (they use ferrules with straws stuck in them and sleeves over the stretches between stops) on the Durance this week- sooo pretty…

(I run a review website, otherwise there’s no way I’d have a picture of cables at the ready)…

I was going to say… pretty quick with the on topic photo there.

Just found this over at Copenhagen Cycle Chic.

Interesting take on the classic mixte/drop bar bike. Not sure why or what purpose the large open bottom bracket serves, but it’s cool that he pulled it off in a fully functioning prototype. Also, very well done video, production-wise.

Ive been admiring that concept the last few days. It’s such a shame that it will probably remain a concept because it looks seriously nice and has some cool details.

Im very skeptical about the handlebar lock though. Dont think that particular detail is 100% yet, but definitely close.

I can see how it took 5 months to build it though, very nice prototype.