This week, something occured to me. All of the sex product designs I’ve seen have two things in common:

How pompous is that? I have to say, I’ve had hundreds of sexual encounters. I have to say, I think that I probably have as much to learn about what women want as I have found out. Probably I have a great deal more to learn. Yet, other male designers feel they have just what every woman wants. Ugh.

The second thing is, why don’t they design something they can use themselves? I mean, that’s something they have a more intimate knowledge of, isn’t it? 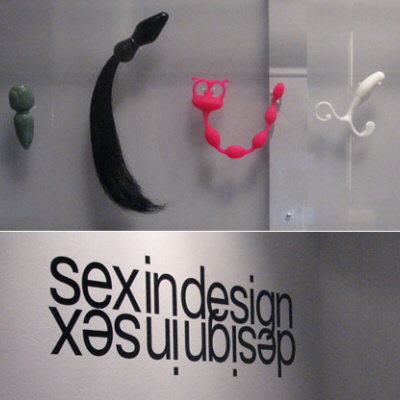 Sex in Design/Design in Sex - Core77

The exhibit, designed by James Biber and with graphics by Michael Bierut, recently opened at the Museum of Sex in New York. The show sets out to examine the subconscious, as well as the intended, sexual imagery in design as it is found in the...

lol, hundreds… have all designers been with that many partners or just us two studs

I’ve spoken with some female students who have done adult novelties as projects, and talk about research suggesting a need for toys that focus less on penetration.

this one may fit that bill

I didn’t say I’ve been with that many partners, but just that I’ve had hundreds of encounters with those that I’ve had. I’m actually a lot closer to Al Franken than Wilt Chamberlain.

The cone: That’s interesting. It looks completely non-male designed. However, it does look functional. On another level, I remember in psychology classes talking about phallic symbols and the triangle, or cone, is the simplest. It’s like a modernist toy.

I was really hoping to see some conversation about this, and I’m sorry if my tomfoolery has poisoned the topic, I was just joking around.

Carton: I don’t think you killed it. I guess designers are all sexually repressed prudes!

many of us are in america, land of puritanical prudishness

I found this one, when googling sex toys designed by women,

This one won an idea award

hm… why that color i wonder in both products. anyone have any real insight into that?

the cone and such product are a very interestiing topic. toys are exactly that, toys. i think the citical component to a good design in this arena is its ability to attract the user. if the design does not draw the consumer to it comfortably, it will repel and be ultimately useless (or good for a door stop).