Seperated at birth: VW and Chrysler

I just noticed this a few weeks ago. The major cues on the VW CC and Chrsyler Sebring are pretty much the same: headlight shape, the grille shape, the line down the side and the shape of the glass on the side.

In the dazzle camo thread, someone joked about the camo being used to avoid a car maker knocking off another maker. Sometimes, it feels like these guys already know what’s in the works elsewhere. It’s just a question of execution. 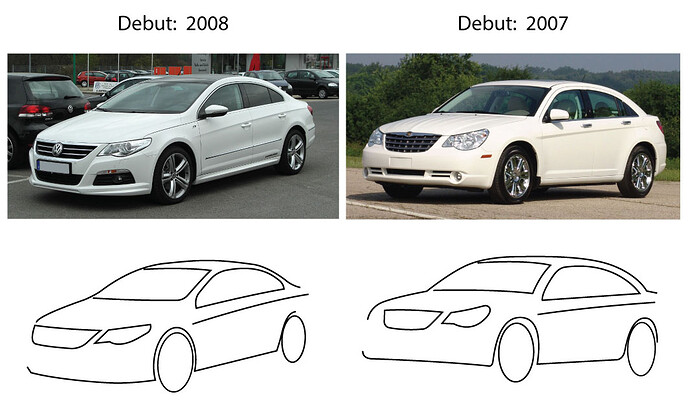 Nice catch. One can imagine how the product and design specification might have been identical for these vehicles.
I’ve said that I will never own a sedan again because of the impracticality, but I almost skipped the principle and bought the VW CC because it looks that great. On the other hand I wouldn’t be caught dead in that Chrysler.

Would be interesting to compare price and sales figures. I bet the Chrysler sells better, but if the Chrysler made the CC it would sell much much more.

Honestly car design trends tend never to be “that” original. I can almost guarantee that nobody in VW had a Chrysler 200 sketch on their board saying “hey let’s knock off this fleet vehicle!”

The coupe like window line has been a big trend in sedans, the grille shape is still typical VW, and the surfacing around the lower grille has been used by a million people

While some of the character lines are similar, I’d argue a lot of the surfacing on my 3 series isn’t that far off either.

It’s also worth noting how much execution makes a difference. The CC is a gorgeous vehicle, sleek, well proportioned, feels like a proper sports sedan. The 200 manages to feel like 1 set of wood paneling away from something Clark Griswold would drive.