A few days ago, I watched this clip of ‘a chair that self-heals’: 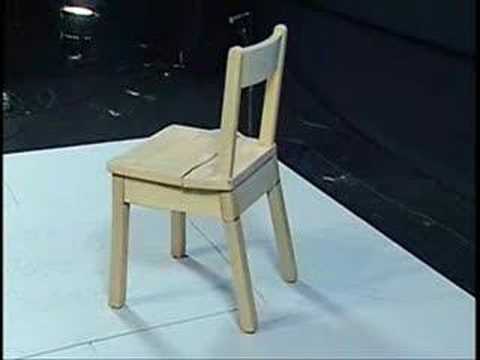 I was inspired from the clip and thought of making something that self-heals.
Although in the clip, the chair is all ‘engineered’ to break down into
particular pieces and come back to its original form on its own.

I thought of making things such as shoes that self-heal by a using
a living material that grows reacting to things such as water that we can easily provide with.

I guess the key factor in this would be the existence of such material.

Do you guys have any ideas about it?

This seems very trivial to me. So I have a robot that can put itself back together…So what. Let me break one of those legs and see what happens. If it can heal itself then that would be impressive.

I would envision “self-healing” products as being more special materials/surfaces. Imagine cellphone cases recovering from chips and scratches, or better yet, still being aesthetically pleasing while also resistant to damage and not overly bulky. Anything requiring mechanical motion to re-assemble or take care of itself just has more points of failure.

Not to put down the self-assembling chair, it looks impressive and took lots of work, I just don’t think it will work out in consumer products.

Saw that vid awhile back as well. I see where you are heading, but this thing is not really self healing because it isn’t broken. Now if that intricate system of servos broke inside and healed itself, I’d be impressed!

One thing I’ve always been interested in are self healing cutting mats. I know they break down over time, but they stay pretty nice for a long time, especially considering how much cutting gets done on them. I always wondered why stuff just wasn’t more honest… do I really want a metal or plastic finished cellphone, or do i want it made out of self healing urethane? I think most peoples answer is the urethane… which is why they cover their beautiful iphones with those little sleeves… why don’t you just make them out of soft urethane Apple?

One of the iphone 3G/3GS rumors was an iphone with a matte finish. Maybe a rubber paint?

That would have been a great finish on the iphone since it would still look great, it would be different from the previous line, it’d have better feel, less slippery, and better scratch resistance.

I’ve had a rubber case for a while, and it doesn’t work so well in the pocket, because it grabs everything and adds to the size. Now I’m alternating between just not caring about how the back of the phone looks and going for a thin hardcase.

As for the phone case material, I think I’d pick metal, like the original iphone, but there is a loss of signal strength… I just think metal ages better than plastic, with scuffs, scratches and dents looking bad on plastic but ok on metal.

I still have the OG iPhone, never had a cover for it. It is scratched, but I like it that way, it feels like it is mine.

There’s something to be said for Yo’s approach of letting the scratches just take place, developing a natural character.

Carl in our office recently applied the principle of planned wear to a set of Pneumatic Nailers for Bosch -these are pro tools and literally get dragged around the job-site floor from day one. The cast aluminum tools have a sandblasted finish and big protective ribs, so when it does scratch up it’s mostly on predetermined areas. The raised logo is not sandblasted, so a few scars will just make it cooler on the sand-blasted surroundings.

Here’s a nailer that was just 2 months on the jobsite (!) and an image of the new Bosch design, pre-ding. I’ll get hold of some scratched-up Bosch samples and post some images soon.

(This is a good image to show Marketers who thing that the Brand is just about the logo.)

Can’t wait to see some of these on job-sites all scarred up.

If memory serves, in the 80’s, Audi advertised their auto paint as being self healing, or something like that. I think the base layers of the paint (not the paint itself) would chemically(?) fill the spot where the scratch/chip was. I guess it was more like a self rust inhibitor. I don’t know how well it worked - perhaps not well as you don’t hear about it now.