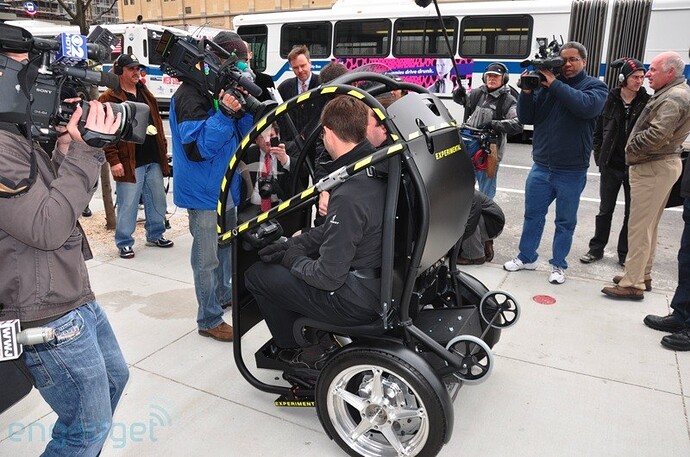 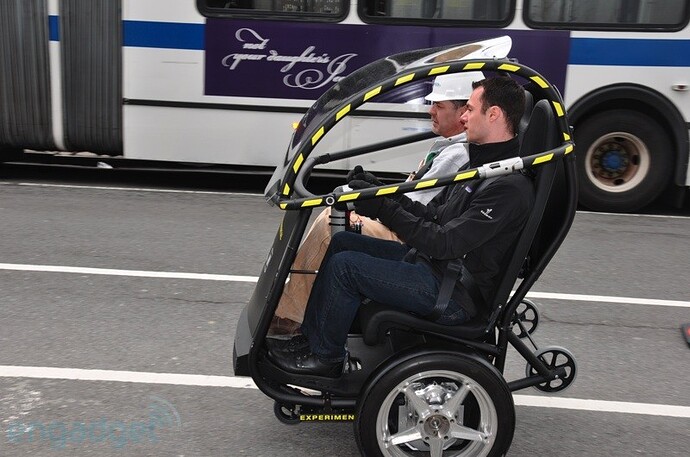 SMH! Please take the time to look up the videos. I think this is a *potentially cool idea. But I am scratching my head over the total “blahness” of it. Isnt that the canon? Small vehicles must always be provocative to bring in the doubters? (even though people are probably now more open to small cars)

Thought I would share, and how is it that even though this is not a “Segway” you still manage to look totally goofy?

oh, wait, a concept model. Just not gonna say it; 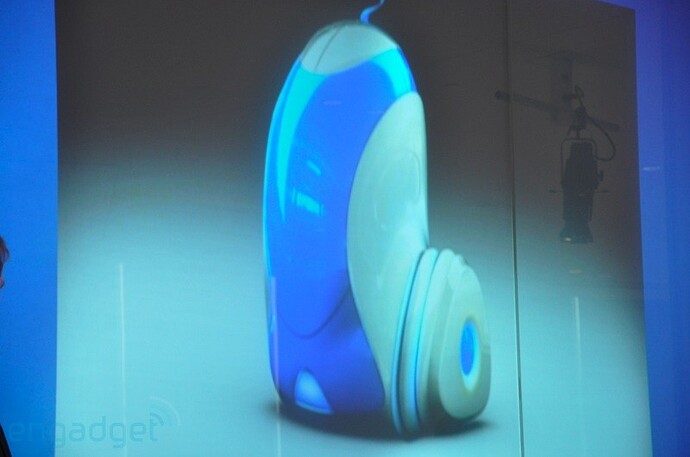 maybe this should be the next 1 hour design challenge?

Why does it have to have 2 wheels? You’ll still look like a tool driving one.

by the time it gets to production it’s got lame training wheels on both ends and has lost all of the cool factor from the Segway technology, and becomes another footnote in the long line of personal urban vehicle concepts.

I wonder how much energy is wasted running the gyros in the PUMA and the segway to keep them balanced. There’s no good reason in my mind for limiting either of these to two wheels. You can have just as much maneuverability with a 3 or 4 wheeled vehicle without doubling the price tag for all the fancy tech it takes to balance a two wheeled vehicle.

I’d hate to see what happens if you slammed on the breaks in this thing going 35mph. 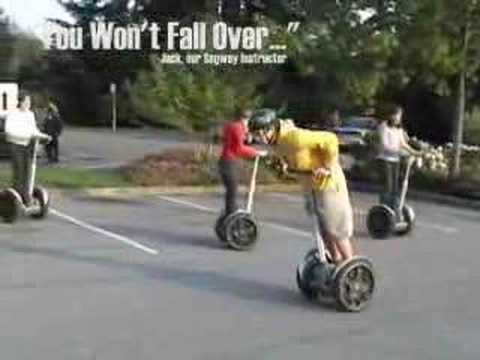 who would’ve thought something could be created that would make you look even more dorky riding than the segway?.. if that was the design brief, they succeeded!

I dunno what to even say. useless.

I’d take a vintage vespa over this any day at the very least.

With a top speed of 35mph, and minimal structure, it is obviously GM’s intent to market this machine for limited street use. With safety issues related to size, speed, and occupant restraint, do you believe that the Federal government will lessen vehicle codes to enable “their” car company to sell this vehicle for operation on public streets and roads?

Makers of pint-sized electric vehicles have a history of making grand promises to revolutionize transport but then struggling to clear regulatory and practical hurdles, preventing them from winning mass acceptance.

In Britain, the Sinclair C5, a three-wheel battery-powered vehicle created by Sir Clive Sinclair and launched in 1985, failed because of safety concerns and other practical issues. The company producing it was put into receivership the same year.

Segway has sold about 50,000 of its two-wheel scooters since launching them in 2002. Some countries ban their use on public roads. They are commonly used in places such as theme parks and military bases, and by police.

Assuming, for the moment, that the PUMA will not be technically marketed as a motorcycle (2-3 wheels), might it open up the production of other ultra-light motor vehicles to folks like to “us”; working in small, collaborative, multi-disciplined shops, to turn out i.e., 1,000 vehicles a year, to local markets? 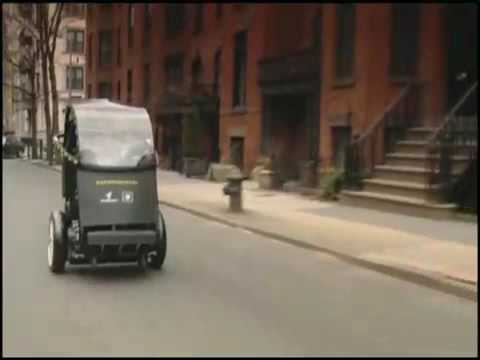 Since it is envisioned as an integrated linked-vehicle system, is the infrastructure required to support/enable it too ambitious for the immediate financial circumstances that GM faces? With that thought in mind, since the United States government now, essentially, owns GM, where is the ethical line drawn with regards to Federal dollars being used for the development of this vehicle, it’s supporting infrastructure, and somewhat disturbingly, the promotion of GM products, over Ford, or other privately owned manufacturers?

The Segway and this Puma are solutions looking for problems. 'nuff said.

Very cool technologies that need the Who What Where Why and When applied to them in a logical way.

They also lack all sex appeal.

Run that PUMA thing through the Duccati filter and give it a good 0-60 time and your in business. Is Tesla the only company that gets that?

I worked on a car design project back in school (my only one), and my professor was an ex-professional car designer, who shared some very important advice with our team…

We were basically making a similar car. More a motorcycle with car-like features. A three-wheeler with a shell and seatbelts.

The problem is here… it’s still a Segway, there is absolutely no front/rear/side impact damage protection. You die if you’re hit. SImply put, you’re dead. The same thing with a normal Segway, but its understood.

An open aired Segway or 1000cc motorcycle doesn’t seem ridiculous because it doesn’t try to be a little car, or offer safety features.

It’s whats perceived, what we already know, that causes the problem.

I hope that changes, because if we’re all in these things, we don’t have to worry about this thing killing us…

The man pictured is an idiot, you can tell because of the yellow thing behind him.

The man pictured is an idiot, you can tell because of the yellow thing behind him.

But at half the price, is he anymore of an idiot for driving it, than the guy than buys this thing… . 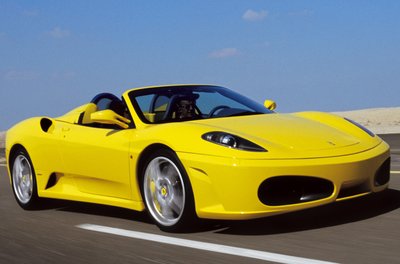 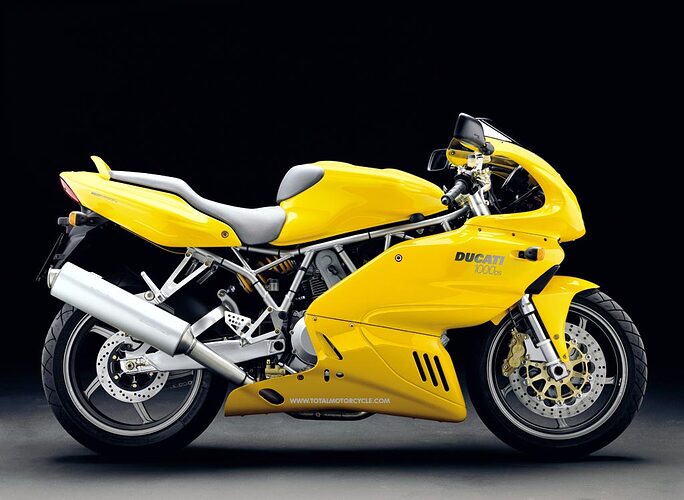 They serve absolutely the same purpose. After all, it’s all about size, isn’t it? And we’re not talking about wheelbase or displacement.

As for the PUMA? Just so much eye-candy being offered up by GM, and the Federal government, to taxpayers that they believe are desperately seeking proof that their investment is well made … like JohnQ had anything to say about it.

looks like I swung it off topic, I probably should have used a better image as the guy pictured looks like he ‘may’ actually use it, or perhaps pretend to use it. in the photo of you(?), the machine is dirty, and you’re wearing work clothes, not a tie and dress shoes.

I see these things driving around cities (north Austin / and Dallas + Houston when I absolutely have to be in either one). It’s basically the same yuppie Hummer H2 crowd, except its the biggest truck in the world right now, and being driven around with a spotless never been used bed, by one man (license plate I saw said “man toy”), and gets 8 miles to the gallon.

the same as you mentioned above, perhaps.

but mainly making the point that senselessly huge vehicles purchased for no reason but than to be big, while driven on the cell phone and a starbucks in hand, will kill anyone in these little Segway-icles.

This new GM’s car is pretty cool, but I hate to I think that sooner or later ppl are gonna stop walking in the streets -.-. sigh

Looks like it belongs at a golf course, or something you rent to get around while your vacationing in the Bahamas.
GM’ wht r U doin??

This is a better design, mho:

crown town is back:

Wow, is it just me, or have people gotten over the whole, “I’m anonymous, so I can act like a douche caldron.”, on the internet? I think I know some of the perpetrators of the ire in that conversation, wow.

Greenman: I guess we got over the thrill of anonymity. I’ve noticed here on Core that people have finally stopped complaining about having to have usernames too. Definitely, we are far better off than 5-6 years ago.