I have to say, this post on Core77 kind of irked me. I think it’s the sort of thing we have talked about before on these forums where others outside the design community ask for help without really putting value on the process.

Seeking help from Core77 readers: An idea in need of sketches/renderings

I suck at presentation drawings. And as evidenced by my banquette-building post, my ideational sketches are useful to me but chicken-scratch to others. So, to all Core77 readers who are ill with Illustrator, fleet of Photoshop or magic with markers,...

The post here was (and I am paraphrasing), “Hey I have an idea, but I need someone with sick rendering skills to do the work for me and in return you get your name on a post of c77 and if the product were to get made you get something better than money. The self pride of knowing you worked on something that went to market”
I expect my friends to ask me for something, or the business people in my office, but a front page posting form someone at C77? That’s disappointing. If you have an idea and need someone to help you design or render it, PAY THEM!

To be fair to Hipstomp, his quote at the end doesn’t really say he’s going to market the product with your sketches/designs. It kind of sounds like he’s throwing up his own mini 1HDC.

Not that I like the way he did it, I’m just saying he’s not necessarily asking for something for nothing.

True - but let’s not pooh pooh all kinds of collaboration. I recently asked for help with an article I published in a professional journal (online version: http://www.kiosk-magazine.co.uk/issues/. Yes, there was no financial incentive but I got some great visuals to support my discussion and the designer got credit and publication - everyone was happy.

mrtwills: I think you should write hipstomp and ask him what he is using it for. Doesn’t he do some of the coretoons? Maybe it’s for a gag?

he doesn’t do the coretoons to my knowledge… I also thought it was a little bit, um, odd…

My general thought about this type of thing is no one is forcing you to do anything for free and some people might be interested in just getting a project out there.
I was just surprised it showed up on the front of c77. But after re-reading it I guess he does not say what his plans are for it are.

It’s funny you bring up coretunes because one of the best one’s is about this subject exactly.

I just checked out the fueledbycoffee blog, there is some really funny sketches.

EDIT- maybe this is not a coretune. 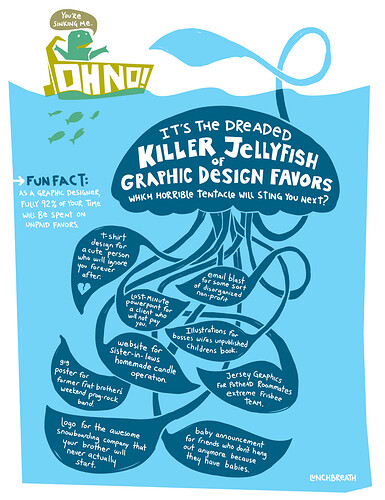 I’ll admit, the request struck me as odd too. I would have expected him to use the forums first to get traction / interest and then post on the core blog afterwards.

I shot a message off this morning. I’ll keep the thread updated if I get a response.

I agree, that post was off-putting. I would like to see hipstomp do a ton of thumbnails no matter how crappy he thinks they are, post them, and see how everybody else can reinterpret the concepts with their own drawings.