I’d be grateful if you’d check out my current project, the SafetyNet sustainable fishing trawl. It’s currently in the running for some funding to get it up and running, so if you have a look at the website and like the project, please vote at the link at the bottom of the page. 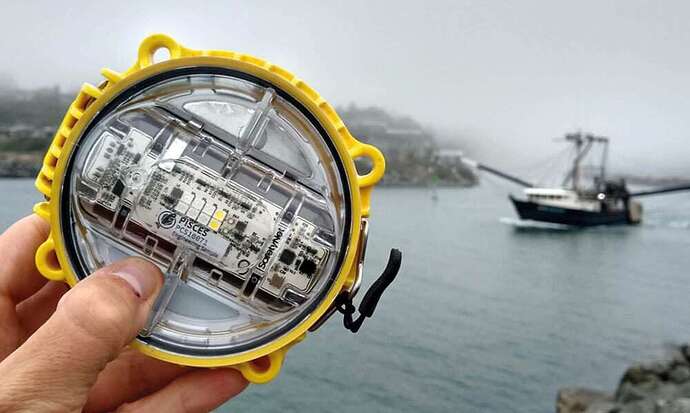 If you DO fancy voting, you can do so here. It takes about a minute but would greatly raise the project’s chances of being launched:

Well done Dan! Not sure if the “fishing industry” is going to go for changing batteries is hundreds of rings. Could some luminescent material be considered?

How were you able to determine that the mesh of the net deformed as the trawl moved forward? Sounds like some time spent in the water.

The rings are actually self-sufficient in terms of power. A lot of time went into devising an energy harvesting system small enough and rugged enough to fit into the ring structure, without compromising too much strength. Fortunately, being based in Glasgow at the beginning of the project, I had access to the excellent archives of the Fisheries Research Service in (relatively nearby) Aberdeen, as well as the Scottish fishing industry to talk to. The insights into how the fish and nets move in relation to each other and the water came from lots of reading of scientific studies, watching videos and interviews with fishermen and scientists, as well as going out on trawler boats to get some first hand observations.

Hope this answers your questions, but by all means feel free to ask me some more!

This. Is. Awesome. I have to say, I learned a lot, and your project was very clear to me. Unfortunately, your use of the word “innovation” at the end, as well as the animation of lights with a really harsh sound and low fidelity animation really ruined it for me. I would round up nicely by just saying something like “this design reduces environmental damage etc etc, support it here (with black background and short sentence for text)”.

Really well explained project and as tarngerine said I too learn’t alot. I guess I would like to have seen a proof of concept in terms of how much the illuminated element is required. The only element I found incredibly annoying was that choice of music in the background especially as it became more theatrical.

Thanks for the compliments, guys.
clam, I agree with you that it would benefit to show the proof, but unfortunately due to UK IP laws I can’t show the final devices until my application is all sorted (pretty annoying when it’s in competitions, etc). If you guys have blogs would you mind giving the project a shout out and letting me know where it is?
Tarn, the feedback I’ve had from the video is pretty mixed, but a lot of people seem to dislike that last line so I’m going to change it right after my exams (and re-record the sound). Cheers for the advice!

Very nice Dan, we’ll see if this drives some votes: 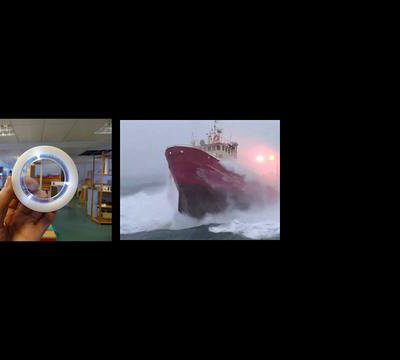 SafetyNet from Dan Watson on Vimeo.40% of the world's population relies on fish as their main source of food. At present, unsustainable fishing practices mean that we are in danger of depleting our fish supplies and trawling species such as cod into...

Thanks Michael, very much obliged!

It’s people/concepts/research and innovation like this that really shows what narrow-mindedness, stupidity and short-sightedness is seemingly rife in the industrial world.

Not to throw a wet towel on things, but I voted for your yesterday and did not receive a “verification” e-mail from victorixox to to authenticate my vote.

I like that is is an environmentally positive concept that is decently thought through and explained in a highly visual and fun way. No arm waving, no unnecessary verbiage, you are SHOWING us a possible solution. It would have to be heavily tested and I’m sure go through a rigorous process of adjusting the design under real world conditions, but that is the process on anything that is actually trying to do something ambitious. Nice work.

Re: ring power: I immediately thought of the LED shower heads that are powered by the generated torrent. I’m sure it would be possible to butcher one and move some components around to make a proof-of-concept model. But you seem to have solved it already so nevermind I guess… good work.

Not to throw a wet towel on things, but I voted for your yesterday and did not receive a “verification” e-mail from victorixox to to authenticate my vote.

I’ve voted but not received an email to verify it too.

Thanks for all the feedback on the project (and the video!). Engio - that’s pretty much what I’m using to power the rings, so well spotted.
I’m quite concerned that the emails aren’t going out to let people confirm their votes. I’ll get in touch with Victorinox and see what’s happening to them.

The encouragement is very welcome!

Great project – as a side note I loved the life aquatic reference with the music, hilarious.
I wouldn’t mid seeing a video of an actual fish swimming through one of those circles – I guess thats the only part that’s not quite as compelling as it could be. The question lingering in my mind is: are the fish actually going to find and use the lights?

Just voted, got the confirmation email. Very impressive project Dan, thanks for posting it.

Hey Dan, congrats on the feature on FastCo! Although you might want to correct them because they call you David Watson… http://www.fastcodesign.com/1664090/nets-that-could-help-save-7-million-tons-of-fish-a-year

A truly fine project. Probably the most impressive I’ve seen from an ID student, graduate, in several years.

In a planet of ID students and graduates consumed by Apple this and that, it is inspirational to see real problem solving well explained.

From a design critique only, probably toughness is a problem. I imagine daily use in trawler ships is extremely, grotesquely abusive. Also the power source issue seems guaranteed for problems; perhaps other power source such as electrochemical, chemiluminescent?. Probably also, in fishery industry, acceptance of the new is difficult, and tolerance for failure is zero, rejection absolute. Could there be different ring models for different specific fish species avoidance?

Please keep us informed how your project goes.

Dan,
Appologies for the late reply as I’ve only just seen this thread. This is a good project but… would it not be better to make the net out of square mesh rather than diamond, so that it cannot collapse, especially in the cod end. I have seen various nets already doing this to reduce the by-catch, so acceptance would be easier within the industry as several vessels are already trialling these designs and reporting back to their fellow trawlermen? Also using a square mesh design would put less stress on the rings as the net would not try to compress the square shape with the weight of the fish in the cod end as opposed to what happens with diamond shaped netting. I worry about the structural integrity of the rings, but more the fact that fishermen would not have time, desire, or the ability to check if they were working. To this end, would it not be better to weave luminescent material into the net, as the size of the ring is dictated by the size of the mesh and the ammount of technology it would need to incorporate (lights, batteries etc) so fitting any device is reducing the size of the escape area. You may be attracting a fish to an escape ring which it cannot fit through, rather than to a normal net aperture elsewhere that it can fit through. I have seen evidence that fish are attracted to light sources, but these are always under non stressful conditions ie. when they’re hunting. Would a series of flashing rings surrounding a group of tired, trapped fish, not confuse/disorient them further? Especially as these fish are caught where they live, so even though it’s a dark environment, they have senses including sight (lateral line etc), otherwise if they couldn’t see/navigate effectively in darkness, they would be living somewhere else. It may be that very low level lights would work a lot better, again a luminescent material possibly woven into the mesh of the net and not requiring a power source. I also think that if you are using these rings then activation only when the boat is towing the net is important as if the net catches the bottom and has to be cut loose, you wouldn’t want the lights to remain on or flashing, attracting fish to their death.
I think the best part of this design is lifting the net off the bottom to stop damage to the sea bed and to also reduce the net stirring up the bottom and re introducing plastic particles that have settled/been trapped, back into the food chain. However, from a fishing point of view, the chain/rock hoppers in a trawling net introduce noise, which attracts the fish, so you may want to consider introducing rattles on the front of the net, to maintain efficiency. This is important as any loss in the effectiveness of the net at collecting keepable fish will mean it will not be adopted by the industry.
I liked the way the net uses fish behaviours (if proven) to split out the species, however, fishermen still want to be able to catch cod, until they have met their quota, so the ability to drop this splitting element until they have their cod quota and to then release/install/hook the separating device in place would be an advantage.
Anyway, just a few suggestions

I do have serious doubts about the light rings working at all and if they do, then why not just make a whole portion of net light up as, towards the end of a trawl, when there are a lot of fish in the cod end, many of the lights would be obscured/blocked by larger fish anyway. I think you have the makings of a really good design, but have not pushed it as far as you will once competitions/masters deadlines are out of the way. I also accept I have not seen all the reaseach you have collated. I would be fascinated to see any of the light and fish behaviour stuff if you’d be wiling to send it or links to me: producttank@hotmail.com

A truly fine project. Probably the most impressive I’ve seen from an ID student, graduate, in several years.

In a planet of ID students and graduates consumed by Apple this and that, it is inspirational to see real problem solving well explained.

From a design critique only, probably toughness is a problem. I imagine daily use in trawler ships is extremely, grotesquely abusive. Also the power source issue seems guaranteed for problems; perhaps other power source such as electrochemical, chemiluminescent?. Probably also, in fishery industry, acceptance of the new is difficult, and tolerance for failure is zero, rejection absolute. Could there be different ring models for different specific fish species avoidance?

Please keep us informed how your project goes.

I don’t often quote myself, but when I do…

It appears our man Dan has won something or other. Apologies for not linking to the Dyson site but nothing is up there yet?

Hopefully Dan still frequents these parts and can provide some updates. Regardless, congratulations, and I reiterate my quote above.