Not that it matters, but here is what I would do to save Saab in GM. 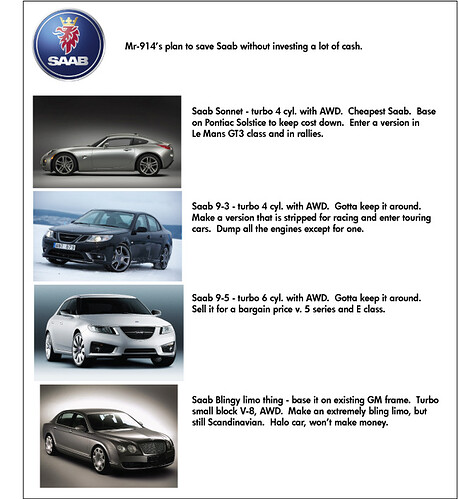 I would ditch the Sonett and Blingy limo, and do what Fiat did to 500 with this:

engio: I don’t think many non-nerds would know what that is. I’m thinking of how to catch attention in the states.

Yeah I guess. One can always dream thou

I still think they need a small hatch with a small engine to make money - 9-X ( Saab 9-X Biohybrid - Wikipedia ).

Love the idea of a 4cyl turbo AWD Sonnett, been dreaming about that for years. I was searching for an old project Sonnett to drop in a c900T engine into for a while, but then I had to get rid of some other projects, so a new one wouldn’t be in the works.

The idea to update the Ursaab would really be interesting, especially with some razor sharp 3 spoke 17-19" wheels. Contest anyone?

Solid plan though otherwise I’d say. It would be a sad day if SAAB no longer exists.

I like the idea of a kappa based Sonnet, but all this seems to be postponing the inevitable.

What is Saab anymore? They have been wandering around lost for years. They are never going to legitimately compete with BMW or Audi, so it’s suicide to try that. Trying to be a cheap Volvo isn’t going to work unless the Chinese really mess Volvo up. Trying to be the Swedish Subaru (with Swedish labor costs) is a losing proposition too. Saab’s traditional stereotypical market is what? Highly educated liberals. All those people are now driving Priuses. With Toyota’s reputation headed steadily down the toilet, that may a pretty easy market to poach, but not with an electric Chevy Malibu like GM is trying to do.

I would swing for the fences: Saab will be the world’s greenest car maker. All electric and/or hybrid powertrains (for now we can use the Volt drivetrain). They have to be legit hybrids, so none of the mild hybrid stuff used in GM’s other cars. We probably have to start with one, maybe two, models and drop all the rest. Volume will suffer, but we are rebuilding the brand from scratch.

Most of our design focus and money will be spent on the interiors. We’ll go for ultra- Scandinavian modern like Volvo half-assedly tried to do, but we’re going to turn it up to 11. We’ll use low VOC materials, interesting surfaces like cork and recycled leather, lots of recycled aluminum, solar roofs, and whatever other green stuff we can throw at it. All plastics will be bio-based. The car should be entirely recyclable or compostable at end of life. The exteriors are easy: the original Saabs were very streamlined and aircraft-inspired, and that works perfectly for our purposes. We’ll put windmills and solar panels on the factory, burn reindeer crap for power, you name it.

I like the all-AWD strategy, but only if we can do it with electric motors. If we need a halo car, it should be something like an electric Elise, just like the Tesla or Dodge Circuit (that’s where your Sonnet concept fits in). And most importantly, we’ll charge more for the product, not less. It’s a premium product, and we’re not going to apologize for it. No more rebates, no employee pricing, no crappy plaid suit dealers. It would be cool if we could lose the dealer network altogether, and just contract service out to existing GM dealers, but that is probably unrealistic.

Scott: I’d like to combine both our plans. Mine is for year 0-year 3/4. Then yours takes over by moving the AWD to electric motors and a hybrid system. I like the idea of going very green, as it does fit the brand.

Aesthetically, how would the green Saab look? I was imagining using the very pretty 9-x as a base for my Saab line. Would a green Saab go back to the Ursaab or something completely new?

With Subies (I’ve owned 3) running past $30k now and being less reliable (in my experience- my last car was an '05 WRX wagon, aka Saabaru), they’re seeming more and more reasonable every day. What am I going to replace it with? A Venza? A bit too soccer mom for me. If only the CTS wagon came with a manual

IMHO, the compact 3 door only makes sense if they can bring it in well below the Volvo C30 price-wise, but with more space. The C30 is sexy from the back but awfully small in person (and closing in on the A3 price-wise).

I’d say, keep the 9-3 with a smaller engine (and AWD option), shoot for a hybrid, keep the 9-5 and co-develop world cars with Opel (a’ la Saturn). Keep them a bit odd, too and improve outreach marketing- they really need to go after Subaru, who are coasting as far as I can tell. They could try for Toyota, but that’ll be a harder battle.

Subaru is definitely coasting IMO with the generic eclectic unoriginal stuff they’ve been putting out lately. I’m not a car afficionado but I would say go for Subaru, but still with the super-clean scandinavian simplicity.

What I love about Subaru is that they half-heartedly bring the WRX over in '01, and all of a sudden they double Impreza sales with the WRX accounting for half the volume of sales. How do they follow it up? Make heavier, more vanilla, slower and duller cars. Subaru will be going the way of Saab and Saturn if they don’t wake up…

What I love about Subaru is that they half-heartedly bring the WRX over in '01, and all of a sudden they double Impreza sales with the WRX accounting for half the volume of sales. How do they follow it up? Make heavier, more vanilla, slower and duller cars. Subaru will be going the way of Saab and Saturn if they don’t wake up…

yea subaru is in no mans land for me. I “like” some of their cars, but the styling is not enough to justify the price in comparison to the other brands out there (id take a malibu over a legacy for the savings, and would go for an acura if i was willing to pay the subaru price, etc), and i have no brand loyalty to them, and im not huge on awd. So yea i agree they need something to stand out a bit. just my opinion.