Saw this recently while in a department store in Mexico. I assume it’s a worldwide release as it’s on the main site, but haven’t seen it elsewhere. Not sure I like the final result (looks a bit cheap and like a bitch to keep clean - fyi all the metal surfaces are chrome), but I appreciate the idea of straying from the all too common stainless and black aesthetic.

I didn’t really check them out too closely so have no idea about build quality or anything, but the wood details are kinda nice and overall look not too bad. The giant branding doesn’t work for me though. Not like Russell Hobbs is a premium brand (AFAIK) that you want to shout across the kitchen. 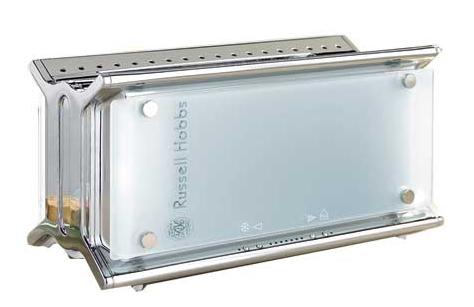 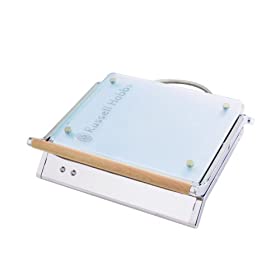 
not sure, but wasn’t it Russell Hobbs (?) that did a collection a while ago with some designer or department store in the UK? it was super minimal and all white. Kinda nouveau Braun/Muji/Apple. Looked really sweet… Anyone? That was much better, though this is kinda different at the least…

I’m there with you RK, when I first started at another countertop appliance company I was at first pretty intrigued by the Russell Hobbs line up, just very different than most anything I’d seen up to that point. I still have only seen one of the toasters in person and was not so impressed with the actual product, but it did make me think about the wider world of material options.

First time seeing that espresso maker, and I can’t imagine why you’d want a glass plate as a drip tray area and wondering where the hexagonal cue came from?

Cool use of materials. I always want to use frosted glass after working in lighting.

My mum has that toaster in the UK, she’s had it a few years now too. One of my annoyances of it was the toasting indicator LED’s stay on constantly… seemed a bit needless to me.

I like that they tried to be a bit different, but it is a bit dated now.

That line you’re talking about, was it Rowenta ?

Designed by Jasper Morrison
Much more my cup of tea

That line you’re talking about, was it Rowenta ?

Designed by Jasper Morrison
Much more my cup of tea

Yup, that was it. thanks. agreed, much nicer.

That Jasper Morrison line for Rowenta is very cool and has some nice details. The coffee maker in particular has so many
nice considerations, the small scoop has a small embossed detail to invite a finger which due to the shape of the housing
underneath tilts the scoop up to grab. The brew basket turns into place with nice detints for haptic feedback.

I have the toaster and while it is very nice looking and slim for my small countertop, the two large quartz elements do a
pretty poor job of toasting evenly

I feel like the proportion of glass to metal is working much better in the espresso machine, it also helps that the glass has the temp gauge on it, and there isn’t any huge branding. The glass on the toaster and what I assume is a waffle maker looks much more added on and decorative, and that large, black branding feels tacky. I like the form factor of the toaster though.

The Jasper Morrison work is very nice, and fits his “super normal” design approach. You can get it at DWR in the US.