Inspired by TH’s Under Armour project, i’ve thrown together my take on the UA runner. Work still in progress and will hopefully add more and get into the details if I have time.


The inspiration comes from the coverage of plated armour and lightweight chainmail.

The upper has a lace cover and the lateral forefoot and heel are a lycra mesh over a knit-like mesh or die cut eva material. Upper panels are bonded (seamless) with similar construction to fused seam running apparel. 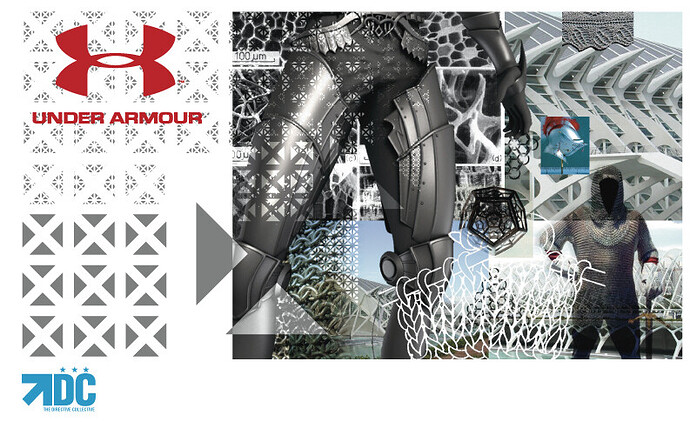 Still working on the construction…the concept is that the lateral heel and medial forefoot are double lasted. Seen a similar construction on a court trainer, and like the contrast of hidden vs. visible cushioning elements. 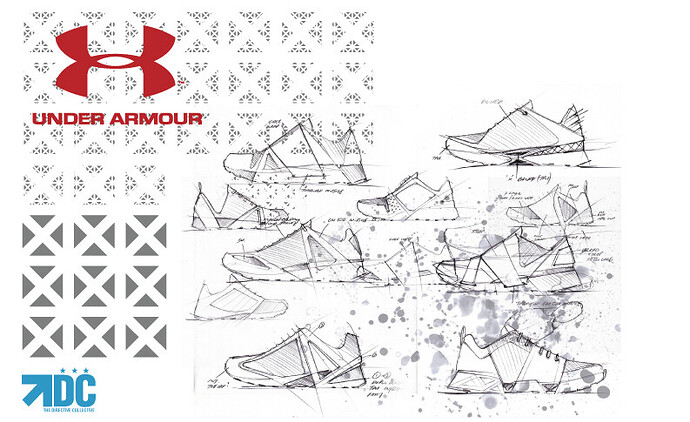 As UA is new brand in the footwear market, a focus of the design is establishing a footwear category DNA. Large overfoot branding, and lacecover give a minimal, unique aesthetic and good read across the field. Repetition of triangular elements are designed to reinforce a structural, strong identity, and overall engineered construction approach. 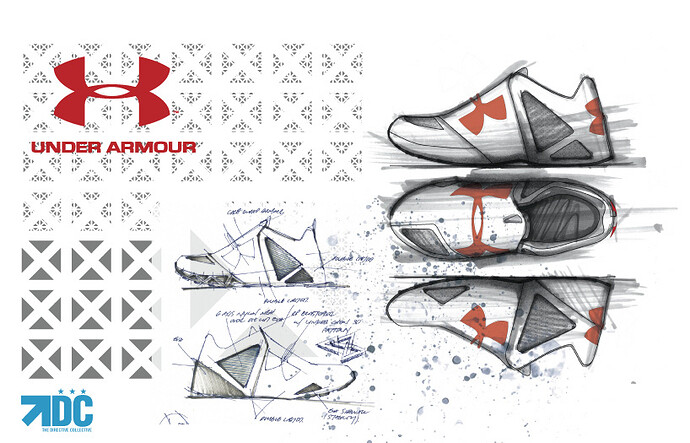 Nice work. It’s tough to comment in this early stage because I know you will tweak it out and make it a million times better.

I like your thoughts about the triangular shapes and overall approach to the brand. Cool inspiration as well. That top right sketch is nicer for me than the marker/colored one. I guess I have trouble seeing the performance benefit of this lace cover. Does it replace the laces in terms of tightening to your foot? I DO think it would be cool to see the logo continue over the foot like it does, but use that bridge as a laceholder so your laces stay tied during runs and open it up. Just my thoughts. The assymetricality (is that a word? lol) is REALLY hot on the toe down view. It does look a bit more like a trainer/trunner for me at this stage, but that could even be a bit of the topline being a bit higher, or the similarity to the Jordan LX2 and how it was overlasted…

Anyways, I know this thing is gonna be ridiculously hot when you finish it, so I will bow out gracefully!

I love seeing different people’s take on what a brand identity should be. For me UA is far less about the Armour and more about the Under. The clothing that they show that is iconic is almost sculptural. It accentuates the body with creative graphics and highlights the organic body underneath.

Now that you have shown the Armour…I would be interested to see more of a focus on the Under.

I love seeing different people’s take on what a brand identity should be. For me UA is far less about the Armour and more about the Under. The clothing that they show that is iconic is almost sculptural. It accentuates the body with creative graphics and highlights the organic body underneath.

Now that you have shown the Armour…I would be interested to see more of a focus on the Under.

The armour was really only a jumping off point for the concept. What I had in mind with the lace wrap and stretch upper was a second skin like feel for the footwear similar to the “under”. Looking at making more of a one-piece look with graphics that conform to the shape, than a traditional upper with overlays and stitched detais. Likewise, what I had in mind (although i know not really clear on the sketches) is an underlayer that give the support and function like the muscles under a shirt.

good points though, and thanks for the comments.

To your point TH about the lace cover performance, what I had in mind was that the cover keeps the laces hidden and clean. I figured the runner would be used for training so could be put through more rain, dirt, etc, without compromising the breathability or function of laces. As well of course, an aesthetic difference and point of differentiation for the brand.

The lace cover actually started part way through the concept process trying to fit the logo and branding on the footwear. I felt the UA logo looked just kinda slapped on and conflicting with most upper patterns, so actually started printing out some large logos and trying to place them on the shoe. Good logo for apparel, but tricky for footwear. I did a tape up to start. The shape of the lace wrap directly came from the process of trying to get lines to work around the logo…will post some pics later.

I love it. I mean, I was blown away by TH’s concepts, and didn’t expect that you could touch them, but this is so different.
IMO, it does fit very well with the aesthetic of their apparel. Clean and minimalist.
I totally disagree with ip_wirelessly. It has both ‘under’ and ‘armour’. Think about it, the whole shoe - upper and outsole - is covered with a tough shell, while the tech materials are exposed only in strategically placed windows - where flex and breathability are crucial, or where protection isn’t.
The huge logo is very nice as well. Besides Nike, I think UA is one of the only brands that can billboard their logo with customer acceptance. What I mean is that most people wear their apparel as a symbol of serious athleticism, and who doesn’t want to be perceived as athletic?
Bravo!

First I think it is cool the the original topic inspired another designer to do his take, that is pretty sweet and shows how dialed up this part of the site is.

A things I like about the apparel (as exemplified in the pic IP posted) are
1_ How form fitting, sleek and minimal it all is
2_ How they functionally zone areas with textures (white nubs) without breaking the pattern

I think both of those things would take both designers concepts over the top.

agreed that different takes on the same problem is nice to see different designer’s thinking.

i like your point about the functionally zoned areas without pattern break. got some ideas ideas that ill work on when time permits.