Hi guys, I’ve just finished my latest project, a ruler for people with visual impairements. Its a cross between a ruler and a calliper, so that you can take a measurement using the calliper and convert it into a ruler to then draw a line, or use the slider in ruler mode to easily define millimeter measurements that are difficult to see when they are normally just small lines marked on the ruler. Maybe this wouldn’t work as well with inches! Anyway, I think it would be something that everyone would find easier to use if you’re measuring objects, then drawing them on paper. It’s a simple little project, nothing fancy design wise, but all comments would be gratefully received. 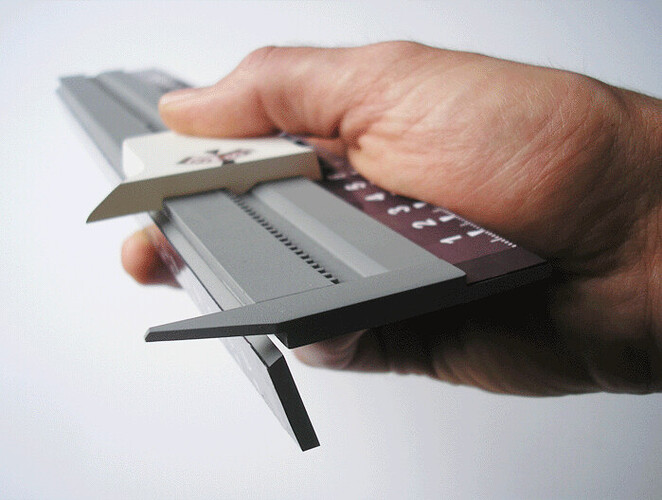 If for the visually impaired though, I’d wonder if a better solution would not be a just a giant digital readout? Hard to tell the fractions of mm from the dial, no? Your design is nice and pretty elegant with the cogs and wheel, but perhaps more serves style than your intended function?

Same with the tone on tone separations between numbers. Looks very subtle but not that helpful if you are visually impaired. Wouldn’t black then white squares every mm alternating be easier to see like on a surveying stick? What about every 5 or 10 colored red or something to help demarcate?

Also, what is the idea with the top ruler being flip down? I don’t get it. If the measurement shows on the bottom ruler, what does the top one add?

Style wise, though, I do like. Looks very functional, tool-like, yet refined.

R,
I wanted to try to stick with a simple mechanical solution, because going electronic seems overkill and unless I go down the OLED route, the contrast on an LCD isn’t good enough, although I take your point on the fractions. I hadn’t intended it’s use for 2 points past the decimal place when I started, as the main aim was to get people with sight problems to be able to read millimetres on a ruler, something they can’t do on the current rulers available fom the RNIB (a UK charity that supports the blind and partially sighted).

The tone is something I need to sort out, it doesn’t serve a function and would be better if it was just a solid black to make the pointer on the slider stand out as much as possible.

The top ruler edge is for the partially sighted as there are no millimetre graduations, (less visual clutter), this is where the slider comes into play. The bottom edge is for general use by users with regular vision (I’m trying to be as inclusive as possible) and so that measurements can be read when in caliper mode, using the centimeter markings and the dial on the slider for millimetres. I’ve deliberated making the distance between mm solid alternating black and white bars, but am not sure if it will help people who struggle as with blurring, small blocks can merge together. Now I am at this point I need to do focus groups with ranges of visually impaired people because I have something that can be played with and can then refine the measurement layout (and anything else based on feedback).

The idea of the top ruler edge being flip down is so that both sides of the ruler can be used to draw lines and measure on the flat. I generally find it easier to draw a line/measure on the top edge (the edge furthest away from me, rather than the bottom, otherwise the hand holding the ruler gets in the way. The top edge is also where it felt best to place the calipers for measuring things in front of you, so it’s a combination of the two. One advantage is that when drawing objects to scale, you can measure the object with the calipers, and with the pointer remaining in place, flip the ruler edge up and then draw a line from zero to the pointers position on a piece of paper, it makes this kind of operation faster, because what the actual measurement is, becomes less important than where the pointer is. Hope this all makes sense. PT

Thanks for the more detailed explanation. It helps.

I do like the project, just wondering where this could go if really idealized. Have you thought perhaps about other uses of rulers and scale? Scale measurements ie . 1:10, calculations, etc. Don’t want it to get to complicated but a modern slide or triangle ruler rule with auto calcs would be pretty sweet esp. if combined with all the tech now available.!

As a side note, I’ve actually just got not too recently a vintage Polar Planinometer (sp?) in my collection that is absolutely astounding. Apparently it can calculate the area of any shape, based on just tracing the contour. Wow, math!

Slick. Nicely designed. Might even buy. What materials? Plastic? 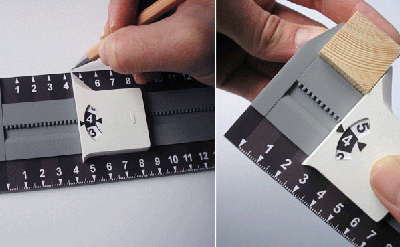 Ruler for the visually impaired by Product Tank - Core77

I love when we are able to find seemingly simple solutions to everyday problems. Product Tank did just that with "New Rule", a ruler for the visually impaired. Adding to the large, high contrast numbers you would expect, "New Rule" has a slider with...

Tarn, it’s only a prototype at the moment (hand made in Acrylic), need to do a lot more work before it can be sold.

R, some really good points which I’ll take on board for mark 2, will definitely put the same measurement scale on both ruler edges. The mechanic scale (the wheel in the slider) is just showing millimeters, so when using the callipers, you look at the cm number the small pointer on the slider has just passed on the ruler edge and the millimetre reading on the slider. I’ve added a quick image.

I’d never heard of a plainometer, but I’ve just googled vintage ones - they look awesome! I need to get me one. PT