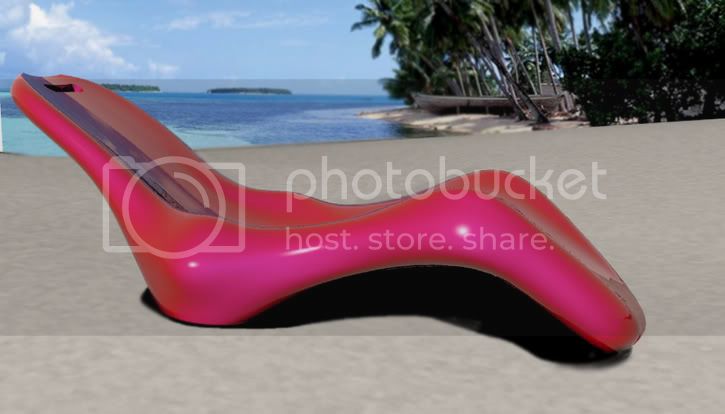 Thanks for the feedback, I used Rhino to model it and flamingo for the render.
I did try to keep the rear ‘feet’ as far back as possible and the centre of gravity of the user forward. It just looks wrong if you put the feet too far back…guess the only way to tell if it works is to try out the geometry on a model.
The weight wouldn’t be too bad, probably 2mm wall thickness (10Kilos?)

Originally the design was supposed to work in the water too ie. float upright with someone sitting in it. But I just got a bit carried away with the form, nice and sculptural…

Nice job. It’s pretty obvious what your inspiration is. However, the “thighs” look really anorexic with bony knees. I would reduce the size of the knees to achieve this, otherwise your chaise won’t be as sleek and lean. The trim areas for rotomolding will be down both sides of your chair and it will look like she has huge scars running the length of her unless you adjust the draft angle enough to put the parting line on the bottom edge.

I guess the inspiration for the form is obvious, but I didn’t intended the object to be compared quite so literally with the female body, just to suggest curves and lines which provoke an emotional reaction.

This is an unfinished project and I was considering adding some sort of upholstery/padding. If I were to do that I would most likely move the parting lines around to where the rebate for the padding would be and have more mould parts. Otherwise as you say I will need to either re-shape the ‘Knees and thighs’ or try to have the product finished smoothly (scraping/blowtorch)

What about some ventilation/water drain, being an outdoors piece of furniture, it might be worth to think about perspiration, maybe tiny slots running through the top surface? (that would give you a chance to add some detail, or maybe holes through.
Or picture this: top view, a big hole as an internal offset of the shape (which becomes a thick frame) and a mesh attached in the center.

Funny you should say that… mould kiss-offs wouldn’t be difficult to add, maybe some elliptical organic holes down the centreline, that would add some stiffness too.
The frame idea ran through my head momentarily, only drawback is cost when you start adding more fabrication and components…

Wow nice design. I like how it flows from one end to the other and is very organic. I am actually a industrial design student in my junior year at the universoty of the arts in philadelphia so i decided to join the site. keep up the good work!

Very nice!~
Specially its color, the very suitable sexy female
lies down.
I want to lie down in above am certainly very comfortable.