Yeah, I reversed and DVR’d it just because he was so frickin hilarious. I played it back for my wife the next day and we were trying to figure those shoes out. I have no clue what they were.

Can’t believe nobody can figure out what those shoes are. Any way you can get a screen grab off the DVR?

It’s actually been bugging me since I saw it. Tried googling for pics, and checked out all the brands I thought it might be with no luck.

not that important, but just curious…

…would like to see a screen shot… I missed it.

Dang, I guess nobody has a shot. I deleted it from DVR after we watched it back. Sorry.

looked a little something like this. excuse the poor rendering and proportion…didnt have time to call the police sketch artist in and scan something up… 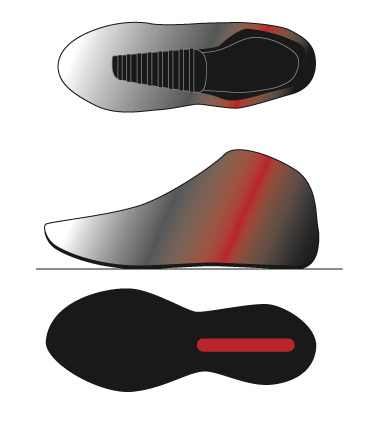 looked a little something like this. excuse the poor rendering and proportion…didnt have time to call the police sketch artist in and scan something up…

I guess it wasn’t these then:

ha. no, but that would be kinda funny.

it looked like a contemporary basketball shoe. pretty sleek, double lasted. allover patent and didnt look like it had much in the way of any visible upperoverlays, logos, details, etc.

hard to really get a look.

I have seen a lot of torrents have the video of Robin Williams at Leno show, but I don’t have bittorrent or similar applications.

Anyway the only cool shoe that I can imagine would fit description are the upcoming nike zoom BB, maybe in a special colorway, check this link: http://p087.ezboard.com/Upcoming-Nike--Zoom-BB/fniketalkfrm6.showMessage?topicID=71200.topic

I didnt see it, but sounds like it could have one of the And1’s on this page

mmm. … could be And 1. but I dont see the same colorway and the outsole looks different. the hunt continues.

BTW, Robin Williams was on Letterman last night. Was hoping he’d wear the same shoes, but had something different on. Maybe a Nike, but not sure. Black/white with what looked like a strap similar to the Vandal. But outsole was more athletic like a 90’s trainer.

Theres an Armani or Prada shoe that has a fade like that…I’ll try to find a picture.

Raffaello Network is a major Online Store featuring Designer Clothing and Shoes for Women, Men and Kids from the Spring-Summer 2021 Collection.

that could be it. but it was a highcut, and the gradient was in reverse. closest thing i seen so far! good hunting!

I don’t think the shoe was quite as sleek as that one. At this point our best chance is to catch the show when/if it reruns. I’ll keep a look out on the schedule.

J,
You spot on…thats the shoe. Only difference is the shoes he wore were a silver to red fade. Although I didn’t record it, I did watch very intently…I want those shoes. They were not mid-basketball shoes and were positively patent leather Prada. At first they apeared to me to be dress shoes, but upon seeing the sole and red stripe I knew exactly what type.

Okay then. You seem more sure than the rest of us, so I guess that’s it. I sure thought there was more to it than that though.

Here’s the colorway. Haven’t seen a hightop though.