Road Trip Toronto to Montreal (via?)

Great time to visit! First thing on my mind is the Whisky Cafe. 5800 St Laurent Blvd. They also have cigars, but as a runner, I doubt you are into that.

I’ve made a similar trip a few times. I’m going to rake my mind for suggestions.

On the way, there is a really nice antique vintage shop in Kingston (called pickers world market) Nice to check out.

Another couple place for food:

-https://crewcollectivecafe.com/ Crew Collective Cafe. I haven’t been yet. Supposedly very crowded all the time and expensive, but the interior looks stunning (it’s an old bank).

-restaurantlexpress.com Express french bistro. The food will make you feel like you are in Paris. Excellent. Pretty good decor too.

Now that I’m thinking of it, as a runner you should run by the Lachine canal. There is a bike path that you can follow from the Old Port. It’s a great visual trip through the old industrial remnants of the city. If you want to mix beer with running (probably unwise), you can stop at my favorite after work place: The Ste-Ambroise Terrace located along the bike path.

Thanks everyone. Working on nailing the plan down but so far I have in mind-

En Route via Vermont (or as day trip from MTL).
Breweries in VT including Alchemist, Hill Farmstead
Hen of the Woods for dinner

VT to MTL via Dunham Brewery.

Will be running the MTL Marathon, so will see lots of the city during the 42.2km…

Keep the suggestions coming! Noting them all and adding to my custom google map!

Hey Richard, the french in the article doesn’t help, but here’s a good list of hotels! 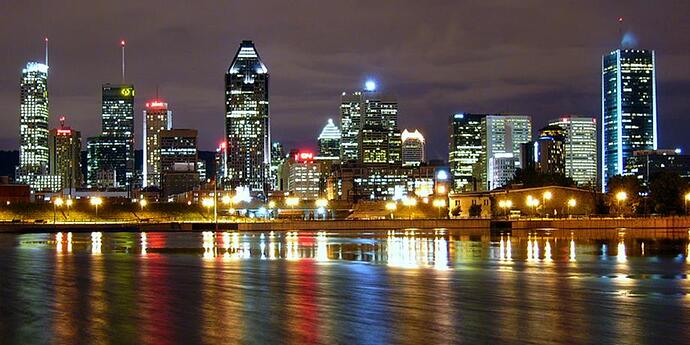 For a cultural experience, I recommend going to a bar like https://2pierrots.com on Friday or Saturday night. They usually have a kind of French-Canadian folk/country music. It will be loud, crowded and likely all in French.

In Toronto some friends took us to Nodo Hillcrest for Italian, it was incredible. If you end up in Kensington Market, the food options are endless, but the Latin America Emporium is legit, cooked up in the back of a grocery. Notable, the Pupusas and banana leaf tamales, very well priced and delicious! (just realized you’re a Torontonian, but will leave this here for historical reference)

In Montreal, not a bad idea to look to see what’s on at What to do in downtown Montreal | Quartier des Spectacles while you’re there, very beloved public spaces.

It’s about 2 hours from Montreal, but I was really impressed with the setup of La Mauricie National Park. It’s got campgrounds, but is also suitable for a day trip. A really impressive trail network and quite beautiful. Maybe some of the closer parks are similarly well established, but as a working national park, I found it intriguing! I imagined the Quebec system of rest houses functioning similarly to the useful network of hostels in other countries, where you can access water and some supplies, but sleep in your own shelter.

There’s a really good stationary store called Nota Bene in Montreal. They have a bunch of Valentine Typewriters in their window and they also sell good stationary/pens/design stuff.

This will sound funny, but I love a good stationary store. I can blow a few hours and a few hundred bucks if I get n one of those…

Here are my recommendations for MTL:

Of course check out what’s available on AirBNB but if you’re looking at hotels on a budget have a look at ITHQ hotel. It’s a government run hospitality teaching institute but you get an amazing stay for 180$. The rooms are nice, you get an awesome free breakfast (freakin’ smoked salmon) in a proper restaurant setting, free parking and its on top of a metro station right downtown.

The Musé d’art contemporain (MAC) usually has good expositions going on. The Belgo Building right accross the street also hosts a bunch of galleries/studios. It’s a much more grassroot operation but if you’re an art nerd have a look at their website for what’s going on.

I think its hard to appreciate Montreal without a minimum understanding of French Canadian history. So to get to bits relating to Montreal’s architecture and infrastructure, for the early part of the 1900’s, Quebec was quite behind the times in terms of education, infrastructure, general emancipation and a lot of the wealth was held by foreign or anglophone stakeholders. This was namely due to a very conservative government with deep religious (catholic) ties. That historic period is usually called Grande Noirceur (Great Darkness) which ended in 1959 with the death of premier Duplessis and lead to the Quiet Revolution of 1960-1970.
This Quiet Revolution was a very sudden change of very deep and fundamentals of society. Quickly going from the some of the lowest education figures to a full overhaul of the education system including its quite unique publicly funded pre‑university colleges and cheap public university network. Also notable are the nationalization of electricity production, massive secularization, investment in culture and ultimately the rise of a national identity and ultimately will for independence (for better or worse).
Getting back to how this relates to the city of Montreal. Montreal feels in a lot of ways like a time capsule to the 60’s and 70’s where the metropolitan area population almost double in 20 years and where massive investment in infrastructure happened. The Montréal Metro was built in that period and a lot of stations haven’t been remodeled. The World Exposition of 67 with Habitat 67, Fuller Dome which is now an environment museum, the France and Quebec pavilions which are now Montreal’s Casino. The city was also shaped a lot by the '76 Summer Olympics.

(Honestly, I wasn’t planning on writing an essay when I started…)

This one’s going to sound like a super touristy thing but Saute Mouton Boat Ride. Essentially, you hop on a super powerful jet boat, they take you from the Old Port to a set of rapids and basically jump around the rapids. It’s kind of like a jet-ski ride scaled up about 10 times. A lot more fun than I thought (you’ll end up completely soaked and slightly shaken) and you get to see the city from a nice vantage on your way to and back from the rapids - great for a first day to get oriented.

As others have mentioned have a look at what’s going on at Place des Arts and in terms of festivals through the city, there always seems to be something going on culturally in Montreal…

Have a look at the Société des Arts Technologiques (Society of Technological Arts) its really central and often has some neat shows/events. Video games and live entertainment tech (show lighting/projection design and immersive environments) are pretty big sectors in Montreal and the SAT is a hub for that in some ways.

Speaking of lighting, Jacques-Cartier bridge has been setup with a full lighting setup by Moment Factory which if I understand correctly is light up every night - I haven’t had a chance to see this yet.

Marché Jean-Talon is quite nice. There’s a bunch of vendors inside and out with a neat showing, the vibe is usually pretty fun. Could be a good spot for lunch if you’re in the area or if you want to grab some ingredients to enjoy at an AirBNB.

On your way back to Toronto, consider a hop in Ottawa. If you do, stop at Beau’s brewery in between Montreal and Ottawa. There’s a bunch of stuff going on in Ottawa right now with the 150th celebration of the confederation. If you’re a runner, you might enjoy a hike in Gatineau Park federal park which has some beautiful trails and will get you close the touristy/hippy but very nice villages of Chelsea and Wakefield.

A gas station designed by Mies van der Rohe. It’s not converted to a community centre.

Habitat 67 is inspirational as well, but you can only look from a distance:/

The tall sand dunes make it a good trek.

Kingston was the original Capital of Ontario and many buildings are constructed using limestone from the area.

In Toronto, the Yorkville area is a gem.

…Kingston was the original Capital of Ontario and many buildings are constructed using limestone from the area.

In Toronto, the Yorkville area is a gem.

I’ve always enjoyed popping through Kingston for a bite to eat or walk around the place. Few remnants of its days as a fort, Fort Henry historical site and indeed the capital. That 401 seems to go forever!

I’m thinking of going to Kingston with the kids for 2-3 days. Other than the fort and the old architecture, what else should I see or do?

Definitely the food and drink!

Hit a lot of the top places-

I do love Montreal, and miss it dearly (I lived there for 10 years). Some of these might not be still as good as they once were, as I left 3 years ago

I made this list for one of my students when he went for the Grand Prix in the spring, and am happy to share it - its a rather awkward as it came from an excel sheet. The order is ‘name, neighbourhood, description’

Seeing
Crescent Street, Downtown, it’s the hangout for all the ferarris
The Mountain, Nice walk up the hill, go to the chalet for nice views and in interesting building
Marche Jean Talon, Market - mostly fruits and veg, but a lovely place
The Old Port, Old Montreal, Walk around, see all the things, not much good food in this hood, go up to another hood for eating except for Le Cartet & Holder

Picnicing
Mount Royal (aka the mountain), Can’t miss it not much food to purchase, but a a favourite haunt by all, lots of green space and views
Parc Lafontaine, The Plateau, Beautiful walks (and very close to La Banquise), also check out Theatre Verdure for free events in the evenings
Westmount Park, Westmount, Lovely locale in the posh neighbourhood, check out the library on the far west side, they have a small botanic garden attached

I just went to Hurricana after work last week. Great place. Glad that you enjoyed the trip!

Their bottle shop opened the week after we left. So disappointed. The 343 Grätzer Du Verger is amazing. I wanted a case to take home!