from the front page: 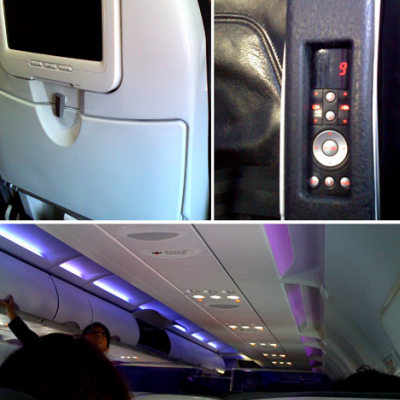 As a Creative Director for a global innovation firm, I fly often. Having to get around the globe on short notice I sample a lot of airlines. All of us should be turning to the passenger next to us saying "can you believe this is really working" on...

"As a Creative Director for a global innovation firm, I fly often. Having to get around the globe on short notice I sample a lot of airlines. All of us should be turning to the passenger next to us saying “can you believe this is really working” on every flight we take, but much of the majesty and magic has been sucked out of the flight experience. From the online booking process, the shoeless, beltless, TSA shuffle through security, to the ragged airplane interiors we are just trying to get through it, perhaps imagining we are in our “happy place”.

Not on Virgin, where Sir Richard Branson, billionaire, innovator, adventurer (man crush) and Adam Wells, Virgin America’s Design director, have created an immersive design based experience that brings back a touch of that wonder of flight. The planes are more than three years old now and it is amazing to see how far ahead they are of the competition. From the mood-lighting, to the CMF of the seat backs, to the sarcastic safety announcements, everything is just better. Because of routes (and my high mileage with United and Delta) I don’t get to fly Virgin much. When I do, I’m reminded of the power of design to evoke a sense of dignity and fun to what is really an amazing fact of being hurtled through the air in a machine with a few strangers.

Appropriately, there is no one big WOW element in the design, but instead it is a collection of well orchestrated small things that make me actually want to be on the plane; like being able to order food anytime you want via the seat back UI, a remote control that feels like it was made in this century, a color palette that relates more to me than my grandmother and flight attendants that seem to be trained to be funny. So thank you Adam Wells. Thank you for not pandering, thank you for looking for the highest common denominator instead of the lowest, thank you for respecting your passengers and honoring the wonder of flight. Other airlines, take note, this is how you do it. Hope you are flying Virgin for the holidays!" 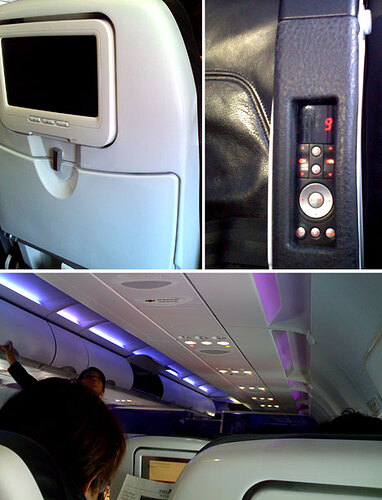 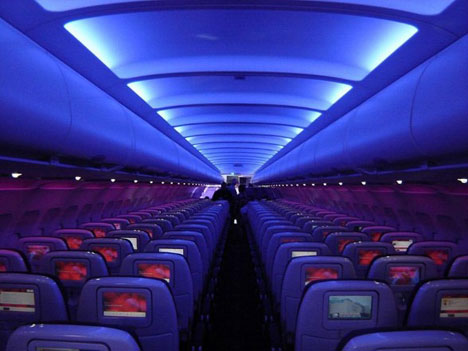 I don’t post often, but as a frequent traveler I couldn’t let this one slip!

Ever tried to get comfortable on a red eye on one of these planes? I usually support my head on my hand and I know I’m not alone (through casual user observation). That’s impossible to do on these planes comfortably because of the remote control cut out in the middle of the arm rest.

I suppose this would be an acceptable trade-off if it made the remote really comfortable to use the rest of the time, but the truth is that it does not.

True, it is probably an off the shelf entertainment system, and fixing it wouldn’t garner a lot of attention for Virgin, but it would have been appreciated by actual users!

Having said that, I imagine that there were both cost and weight requirements that were pretty aggressive. In that respect, I think they did a great job of making things look nice.

Elliot: I sleep the same way in coach. I used to sleep in a similar fashion during my high school calculus class. The problem there was that I would balance my book on my knee. Every time my book would slip, I would jolt awake.

VA is the best US carrier right now. Service and in flight experience are top notch. The head rest wings bend forward just enough that I don’t have to sleep with forehead on the seat in front of me.

Has anyone flown on the Virgin 747’s?

They have a ridiculous set up going on in the first class section (I flew coach but got a glimpse walking through) but there appeared to be a standing bar with bartender, and what may have been a spiral staircase to the upper level. Also they have renamed the first/ business section as “upper class”.

I too was completely blown away by my experience flying Virgin to the extent I found myself telling everyone I knew about my experience.

In terms of the brand, it has been quite interesting in some of the areas Virgin has expanded in, F1 Racing, Space exploration, ect. It’s amazing to think that a brand which started as just a record shop has expanded to travel, entertainment, communication and lifestyle.