Hope someone can help me. The client I am currently doing some work for requires some larger A2 size renders in order to show one of their clients.
The problem I’m having is when I punch in the sizes for the render which in this case is 7016 x 4961. The render screen looks a little funny during the course of the render. Then at the end no image is produced and nothing can be saved. The program will just crash.

Now I have read the links about rendering large format images and tried to follow those instructions but when I get to the point of rendering the final image, the program cancels the render before it starts.

Can anyone offer any help, I’m quiet desperate to get this problem fixed.
I have even tried rendering an extremely simple model of just a cube and the problem still happens, basically for anything larger than an A3 page.

I have attached an image of the render screen so that people can see what I’m seeing.

And trust me the computer has enough RAM and processor speed to cope with the work load. I.e. Quad Core and 4 GB RAM. 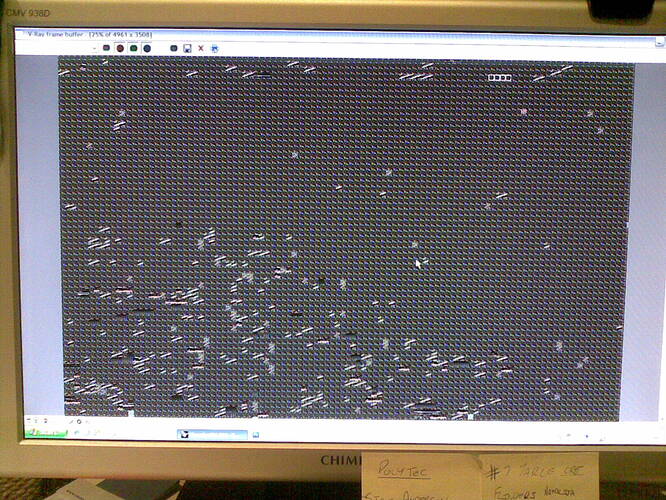 I don’t have a technical answer for you, but you might want to consider a lower-rez.

I did the math and it looks like you’re going for a 300ppi image. Consider by comparison that Canon’s best camera (the 1Ds Mark III) is a 21 megapixels, or 5616 x 3744. Photographers would tell you that’s plenty for posters or billboards.

If your clients aren’t going to be looking at these under a loupe, I’d experiment with 250, 200, or even 150ppi. (Note, that’s different than your printers lpi resolution, which should be much higher because it needs to drop many inkdrops to produce one pixel.)

I know that’s an indirect answer, but give it a shot!

What are the System specs for the render?

4 GB of ram is not that much when dealing with a rendering that massive. And if youre using Windows Xp 32-bit you’re really only getting about 2-3gb of that memory that can be used (depending on if you use the /3gb switch when you start windows). Keep in mind that to go from a 150 dpi (lets say 3000x2000 pixels) to a 300 dpi (6000x4000) you are QUADRUPLING the amount of pixels and memory requirements.

By comparision my workstation is running 16 gigs of memory on a 64 bit OS and I can STILL get out of memory errors when exporting big images.

I would say scale down your images because the difference between 150dpi and 300dpi when you’re standing more than a foot away is probably completley unnoticable.