New week, new car to belittle. We’ve discussed the styling trend of the Chrysler 300 and argued whether the '90’s powerhaus VW has lost its way, now what about La Régie - Renault.

Despite having pulled out of the US market in the mid 1980’s, Renault has been having a renaissance in Europe. They started with their hit minivan, the Espace. They took the concepts of one box vehicles with flexible seating and went down market making the Scenic and upmarket with the Vel Satis. Since the Vel Satis they have also been making a bit of fashion statement. Renault created a new corporate nose and a radical rear treatment on their newest Megane. If you haven’t seen it, it features a funky almost-trunk faceted look that is unique among hatches. 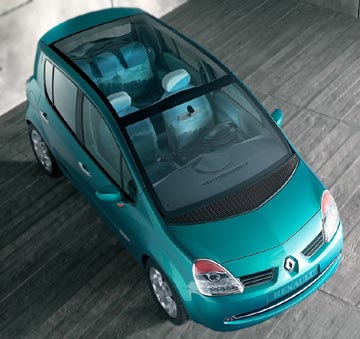 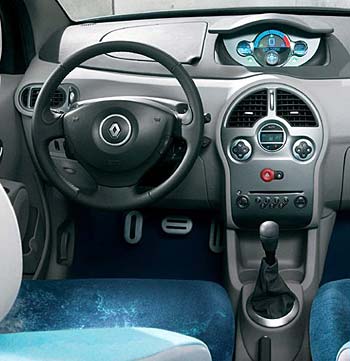 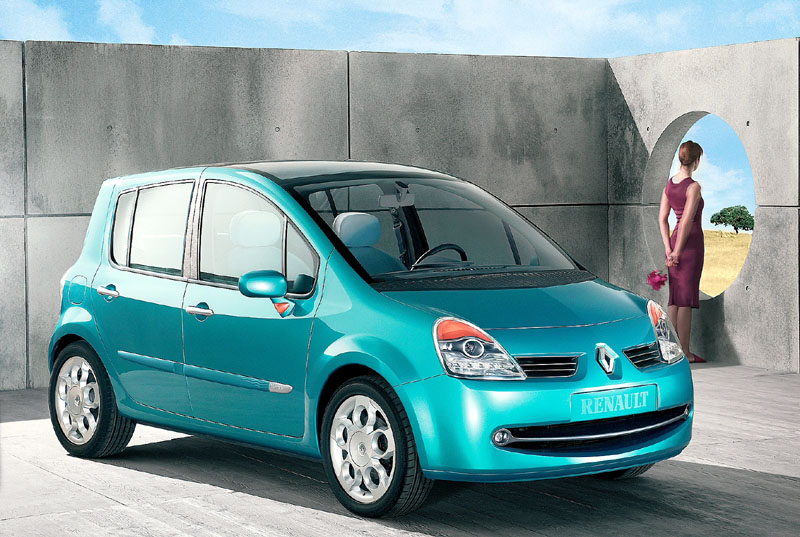 The latest news from Renault the last few weeks has been about there Twingo replacement called the Modus. It is a supermini, but features a trick flexible seating concept. The rear seat can be pushed forward to give more luggage space and also seat three wide, or pushed back to give more leg room, but squeezes down to seat only two. It also features all kinds of bins for storage and seems to be the most advanced city concept from the human perspective. The styling is contemporary Renault.

You can view it in english at: www.modus.renault.co.uk

IMHO, the Modus is suffering from the same problem as discussed with the Golf+ in previous posts. I can’t deny that it’s interesting, but in the transition from edgy concept to production car, it underwent some Echo-ification that ruined it.

If you’ve seen the Echo Hatchback (not sold in the USA, but it’s available here in Canada and I’m not sure where else), you’ll know what I mean. It’s just the latest iteration of the small bubble-cars, but attempting to grow some edges like the more recent designs.

It is a neat little car, but I don’t think I’d drive one.

As to their other cars…I like the Clio and Mégane Hatch, although the latter is still suffering from a low beltline. If they’d made the windows a little shorter (height-wise), it would be great. I do like the cut-off kamm back thing, though: take a look at the Carrera GT for the ultimate expression of that, at least in terms of the cabin…

Alternately, they could do what every car manufacturer needs to do: follow the Porsche 911 Targa and Boxster coupé, or the Honda Insight, and give the car a nice gently sloped glass hatch.

I believe that the Echo is a hatch design to begin with. The trunk was added later.

Renault is on the edge of auto design. I was stunned by the new megane when it came out, but impressed. I saw a couple in person… absolutely beautiful, and gladly wish to own one.

However I think this modus seems to be pushing too far, to a point that I don’t see the reason for doing so. In another words, it’s over done. The forms don’t interact harmonously IMO. There isn’t a consistant theme, and certainly not eye pleasing.

Personally, I will associate a car of this class with softer theme. Or just follow the Japanese’s formula, that is to make everything cute.

Sit in the back of a supermini like an Echo. There is no room to have people with heads and a gently sloping rear window. It’s similar with the beltline. In a small car the only way to gain space is to build up. There is alot to be said about the dymanics of a longer wheelbase, but in this class of cars, it’s simply not an option.

The Echo hatch is actually widely recognized as one of the best superminis currently available. It was never innovative, like the Modus, but rather well-packaged current technology. It’s fortunate that Canadians at least get a chance to see them.

I posted some pics to my original post so everyone knows what we are talking about. Note the full length sunroof. Handy for creating an airy small cabin. Also note the peddles. Great detailing inside!

I think the Modus is pretty cool, and lets face it, the Twingo is a tough act to follow. I absolutely loved that car, it had a lot of, well… charm I guess.

I think the Modust is a good follow up. It is superbly detailed, from the door trim, to the pedals. The headlights give you a touch of Twingo, a touch of Clio, in a more modern way. The only things I would quibble over are that the front air dam is too predictable, and I think a touch more tumble home in the greenhous would make it look much nicer.

Arclight, you are comparing 2 seaters to 4 seaters. The 911 might technicly have 4 seats, but it’s a two seater. The packaging cannot be compared in a realistic way.

Below are some of the other vehicles that where mentioned, for refrence. The Avantime is the coolest IMO, though it could use a touch more tumble home.

They really should have made these:

Is it really that hard to bring ideas like this to production? The design talent is there. I don’t understand, most of us don’t work for companies that make pure concepts that are not for sale to the public i assume.

Production? How about Renault Avantine?

One of the instructors here is from Crysler, or at least he taught here 2 semesters ago. He used to bring a different “competitor’s” car each week. Renault Clio Sport V6 with mid-engine conversion, E-space, Viper GTS( The new one) and the Avantine. It was stunning, definitely not what American audience will be prepared to see. However it’s one of those examples on how far we can actually push for a production car.

Back in the 90s, Isuzu made their concept Vehicross as production model with little changes. Till today, it’s still the best looking small suvs out there.

I’m a renault-fanatic and I’ve followed renault for a long time. I think the switch from the non-descript design of the 80’s and early 90’s is a good one. The more architechtural approach ads more character and makes them more recognisable. You can detect it’s a Renault without looking to just the front of the. A lot brands focus on giving their cars a sibling face.

They should have produced the original Vel-Satis concept car. The one made for production is not stable designwise.

BTW I drive a 80’s renault a Robert Opron designed Renault 9 GTE, known to our American-friends a Alliance. I a strange way I’m atrracted to a lot of 80’s renaults

But seriously, I think the 9 GTE was a conceptual predecesor to the Jette, a compact, well designed sedan for young proffesionals, what do you think?

Do I need to bring up T C Mits? The Common Man In The Streets? He will never buy those concepts, they are just too well designed, ie too far from the out dated stuff currently on the market. The original Mini had that problem, the sales didn’t take off for about 6-8 years. It’s not that it was ahead of its’ time, but rather than T C Mits could not imagine such a small car being stable and reliable.

Perhaps this same mind set leads to SUVs that are based on '50’s technology in the US?

Yo: Could you define “tumble home”?

But seriously, I think the 9 GTE was a conceptual predecesor to the Jette, a compact, well designed sedan for young proffesionals, what do you think?

The thing is French cars were always better equipped than their other same priced european competitors. My car is an 88 model and has central locking, electric windows etc. And French cars were (are) supercomfortable.

Do I need to bring up T C Mits? The Common Man In The Streets? He will never buy those concepts, they are just too well designed, ie too far from the out dated stuff currently on the market. The original Mini had that problem, the sales didn’t take off for about 6-8 years. It’s not that it was ahead of its’ time, but rather than T C Mits could not imagine such a small car being stable and reliable.

Perhaps this same mind set leads to SUVs that are based on '50’s technology in the US?

Yo: Could you define “tumble home”?

I don’t think we give enough people a chance to buy good design. If more companies salvo’d the consumer with higher design quality, that would become normal for consumers. This has happened to a certain extent in the European market in automotive.

By contrast, the US market is much more adventurous in footwear, while Europeans are much more conservative. Products must be very shoe-like and conventional but with refined details to sell well in Europe. In the US constant change is the norm. The consumer is conditioned to expect it. I guess it comes down to to you follow the consumer and deliver on their requests, or do you study the consumer to lead them to something they need.

Tumble Home is the slant of the side glass inward. A lot of cars without much tumblehome look akward.