I came across this online today. This may be old news to some,but it’s new to me, therefore i am posting it. This is a footwear concept from the Industrial Design firm Continuum. They have proposed a concept for a Running Shoe that has a removeable mid-sole that allows “serious” runners to change their midsole after 3months, without having to throw the upper away aswell. I really just wanted to know what some of you thought about this. 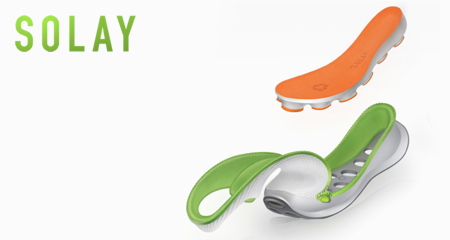 The new Solay concept running shoe comes with a modular, removable mid-sole which easily can be changed by the runner whenever a new sole is needed.

haven’t seen that but doesn’t really look too new in theory. The nike presto clip (below) had a similar construction where although the midsole wasn’t meant to be removable it could be popped out from the TPU outsole base pretty much as shown in the concept.

The Adidas Tunit football boot also has similar construction as well with the midsole being removable and the studs screwing in to lock it in place.

As for the concept, IDK, but to me doesn’t look like it was done by someone with shoe design/construction knowledge…looks very student project to me… I have doubts as to weather it would actually work as spec’d, not to mention I think the zipper would be a bad thing in the flex areas. Not to mention the incredible nightmare for stocking and distribution… 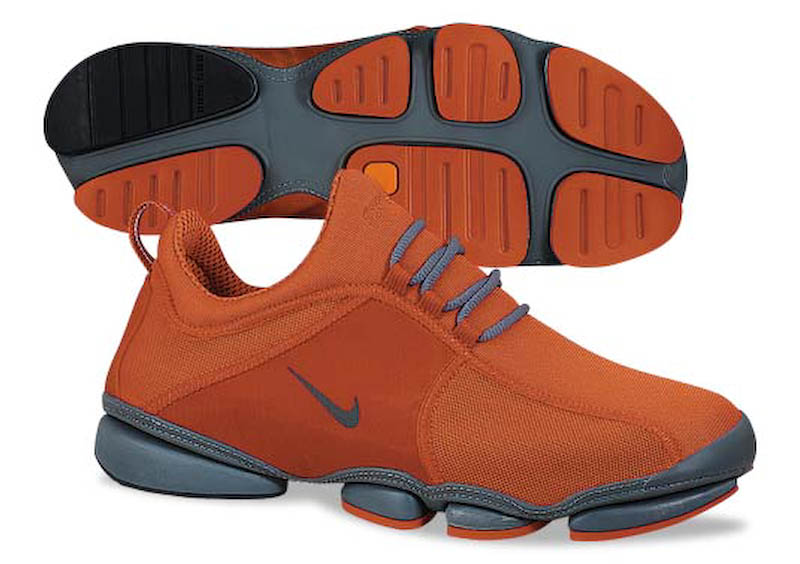 I also was thinking about the Clip.

Have you seen what an upper looks like after 3 months of heavy running?

I also was thinking about the Clip.

Have you seen what an upper looks like after 3 months of heavy running?

too true. not to mention the most expensive parts of the shoe are the midsole, outsole and shank, so the costing side of things wouldn’t really be too much of an advantage…

so basically, it just make sense to go out and purchase a new pair. I always thought the concept of having an interchangeable mid-sole would be groundbreaking in a way, allowing the user to be able to have all the sport-specific cushioning needed all under one upper.But as i learn more about footwear, I’m realizing that maybe there is a reason why that product doesn’t already exist. i think the concept would boom in a casual market, but not so much in the performance footwear category, a sort of “jack of all trades” shoe just wouldn’t be as good as a sport/activity specific shoe.

One thing that might be neat- out of that idea, is the idea of replaceable tread for different weather or road/trail conditions.

Not that just having multiple pairs of shoes wouldn’t be suitable too, but hey- I’m trying to be optimistic here.

5 or 6 years ago we working very earnestly on some modularity concepts, trying to make the functionality, usability, and costing work out so everything made sense. One of the designers on the team piped up and said “The shoe itself is the modular part”.

one related modular concept to check out is -

SkinsFootwear.com is for sale | HugeDomains

This domain is for sale! Fast and easy shopping. Trusted and secure since 2005.

you buy the sockliner part (custom made, i think) and then can buy different “skins” (upper and outsoles) to put it into. Neat concept and great branding, but I’m not sure how commercially successful it has been (though it’s got a ton of press). It was done by Studio Dror in NYC.

Another thing I know that was done at my previous employer (though well before I was there, sometime in the 80’s i think) was the Power Anthro. It was basically a normal running shoe upper and majority of midsole/outsole, but had a TPU cage in the heel that could be opened up to replace a heel cartridge of sorts with different densities of foam, medial support, etc. Apparently it was really well received by runners but i think it was a commercial flop, and from what I remember playing with some samples was a real PITA to use (you needed a plastic key to open the cage, and it was very difficult to do)…

The thing with most “modular” concepts like these (not only in FW), is that designers rarely recognize the true behavior of consumer and often try to be too smart for their own good. Consumers rarely “change” their needs as often as designers think, therefore most modular things, or even designs with “options or customizable” interfaces are rarely ever changed… it only adds complexity to the system, more costs and more confusion… just look at any electronics device that offers 1000’s of buttons to configure stuff that the majority of users never even touch!

not to go too OT, but hence the success of Apple in some products where less choice = better. Sure, some geeks want to mod out their PC, swap harddrives, etc., but most…not so much.

These kinds of concepts have gotta be some of the ideas that tend to be the most overpatented of all, yet you never see anyone really make them work.

MD- I can see the struggle between costing and benefit playing out pretty easy. But sweet that you got to work on that.

In my past life, I did a lot of work with replaceable means of closure. At some point, shoes as we know it will progress into something else… but not quite yet.