It is the Holiday Season and surely FOOD is on a lot of people’s minds. I was at a party this past weekend where an Aussie gave a secret santa gift of Tim Tams and Milo.

It sparked a discussion around food that is “comfort” food. She was almost pained to give this away as a gift but was willing to b/c she was heading back to Australia in a few weeks and could restock. I have to say that I dug the Tim Tams but the Milo was too “malty” for my taste.

Here’s what comes to mind for me:

thats funny, i was just talking comfort foods a minute ago.

oh crap.
that thing. garbage plates are something. 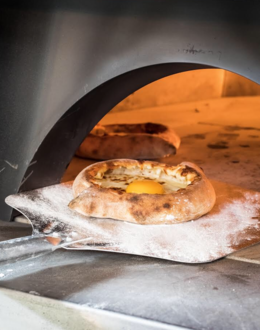 Khachapuri (Georgian: ხაჭაპური khach’ap’uri [χɑtʃʼɑpʼuɾi] (listen) from Georgian: ხაჭო Georgian pronunciation: [χatʃʼo] "curds" + Georgian: პური Georgian pronunciation: [pʼuri] "bread") is a traditional Georgian dish of cheese-filled bread. The bread is leavened and allowed to rise, molded into various shapes, and then filled in the center with a mixture of cheese (fresh or aged, most commonly, specialized Khachapuri cheese), eggs, and other ingredients. The bread crust is traditionally to It is...

-my personal comfort food that isn’t regional, but is def. not found in my native country is a potato breakfast burrito.

Holy Shitovski…that spikes my cholesterol just reading about it.

ok i have to agree with JGray that BBQ tops the list for comfort food. But im from down south so BBQ is not ribs, but rather pulled pork with a spicy vinegar BBQ sauce. Nothing beats Western carolina BBQ and hushpuppies. then put a side of fried okra and finish it off with a sweet potato pie. ok now im starving, and i dont think the papa johns pizza i ordered is gonna do the trick.

carolina pulled pork (lancaster’s) and sweet tea. it’s been chilly here in LA, been missing a good biscuit in the morning.

michigan (for me) is vernors ginger ale and anything from pegasus restaurant in greektown.

Bratwurst boiled in beer and onions and then cooked on the BBQ.

I have no idea how/if it is a regional thing at all (I am thinking not so much), but I had a party here in Vancouver one summer and everyone looked at me cross-eyed when I said this is what was being served.

Needless to say, all were coming back for seconds once they were shown the path to the dark side.

Good grief. I knew I shouldn’t have started this thread. Salivating all over my keyboard.

I can hear my inner Homer now:
mmmmmmmmmmmm…pulled pork.

I love the West Coast, but the things I always get when I’m back East for the Holidays:

I’m a NC native I know exactly what you are talking about. Vinegar sauce and a tall glass of Sweet Tea.

Its a damn shame they don’t know whats good for them here in WI.

Oddly enough, I haven’t had any since moving to Quebec.

i moved to LA over a year ago from charlotte. a few weeks agao a coworker told me about a restaurant near me that served southern-style food. i’ve been skeptical because the ones i’ve sampled here so far were really bad.

tried it out, they served pulled pork and at the bottom of the menu, you had to rewuest it carolina-style. i did and the owner came out of the kitchen served it to us. i guess it’s his way of meeting other tarheels.

turns out he’s winston-salem native and we talked a long time. he gave us some peach cobbler to take home on the house.

ip - that’s how my grand mother made bratwurst, but she cooked it with saurkraut and beer my grandfather made. that takes me back, thanks for the memory.

Vernors - I grew up on that stuff. Even though I know other ginger-ale does not taste that way, I expect it to.

I find it interesting no one has mentioned cheese. Upon moving back to the mid-west I was amazed to find that almost everything in restaurants has cheese in it or on it.

If you are from Indiana (which I am), Illinois, or Iowa then you know what this is. 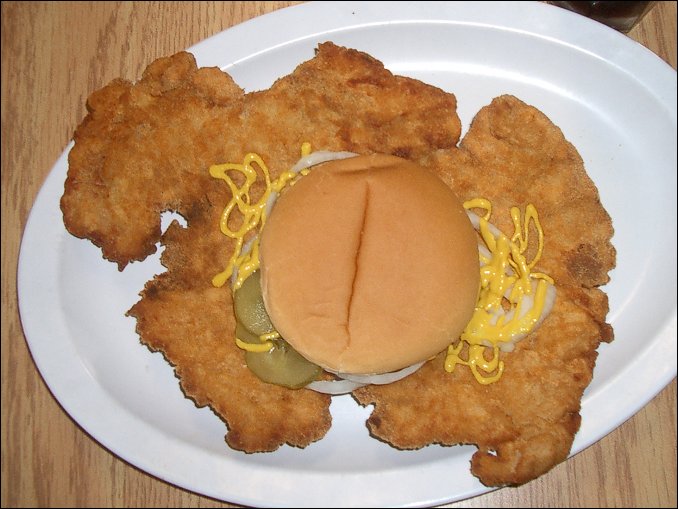 If you’re not from Indiana, Illinois, or Iowa, it’s a deep-fried, Breaded Pork Tenderloin Sandwich; eat everything around the bun, and take the rest home for tomorrow.

Lmo, that looks like a heart attack on a platter. Nice knowing you!

Might as well order up a side of fried tomatoes too.

And few _Schoenling’s Little K_ings to wash it all down!

Ill second the Chicago style pizza, its a pain to find the real deal, sauce on top and all that.

Also, I like the “hot beef(or turkey) with” aka open faced sandwich or real chicken and dumplings. Anyone ever been to Lambert’s, where they throw the rolls across the restaurant to your table?

I love the picture of the tenderloin, Any who hasn’t eaten their way through a fair is seriously lacking in the life experience area. We moved up here from Illinois this year, and went to the Minnesota state fair, the theme was fried foods on a stick. Ill just say that the hard boiled egg, wrapped with pork sausage, deep fried and dipped in horseradish was … AMAZING!

Here’s a fun one, which do you prefer, elephant ear or funnel cake?