hello,
i am starting on a new project dealing with refrigeration. can you guys give me some pointers on the future of refrigeration

…basically, an industry on a downward slope…i worked in the consumer refrigeration industry for a few years…very conservative and like most u.s. industries, struggling to beat off the asian competitors because they would not invest in change…in the far term; the rising cost of energy, food processing and packaging technology will eventually replace the need for more and more refrigeration…foods which are best served cold will eventually need a small appliance (micro-fridge) to chill or freeze food in a few minutes…now go and change the world.

regardless of who builds them, bigger = better, in N. America (as always). Connectivity aint happenin - untill the infrastructure can support it.

sorry i am in india and am to design a refrigerator for a new market, finding a new market,
could you guys suggest something

Design a frig that just holds leftovers, because mine is full of take out boxes.

When hell freezes over, you’ll be unemployed.

After a few minutes of searching on google.com using “no-energy refrigeration” “low-energy-refrigeration” etc., I found this article. I have not read the National Geographic article but am going to the library to try and find it.

In a recent National Geographic article about the history of refrigeration (“How Cool is That?” - October, 2005), Washington Post staff writer Joel Achenbach describes the zeer pot, an African invention which, for less than $2US in local materials and without electricity, can extend the storage lifetime of fresh produce by as much as 18 days. The pot, which is distributed by the Woman’s Development Association in Darfur, Sudan, is of staggeringly simple design: Two clay pots are nested with a relatively thin layer of sand between them. The sand is watered twice daily, and the inner pot, which is lidded, is cooled by evaporation. It’s interesting to note that, although the technology to manufacture the zeer has existed literally since the dawn of civilization, it is not known to have been produced until recently. Who would have thought there was a profound invention remaining to be discovered using only clay and sand?

With the economics of the majority of inhabitants on this planet in mind, I would think that there is a huge market for a basic refrigerator; a machine that might not rely on electricity; human or animal powered perhaps. Consider a communal refrigerator for use by two or more families (to defray the expense). You need to think out of the box on this one … WAY out of the box.

If, on the other hand, you are just designing another stainless steel box with an icemaker, and cold water dispenser in it … good luck, you’ve got a lot of competition.

NOT what the world needs another one of… 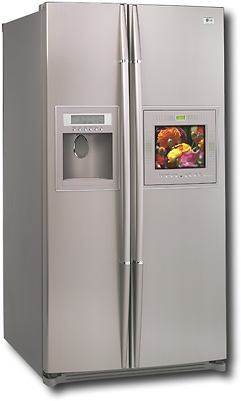 Just take the results of the poll I posted here:

What’s the next thing pasted onto new products? poll The Oakley thread inspired me to see what everyone thinks will be the next function that gets integrated into (or pasted onto?) new products. Remember those days that everything in the kitchen suddenly needed a clock on them? Stove, microwave, toaster over, radio, phone, clock on the wall. I’m not sure if people in the States have seen this, but during our CFL playoffs LG advertised a new fridge with integrated TV. Now we can watch TV on …

and then, stick a fridge on the back.

Saw CHINA RISES documentaty (on CBC in Canada).
Saw this segment about this guy who makes airconditionners, and all his plant is eco-friendly, and his products are as well.
But try to look for him on google.
So what I’d say the trends are:
1 - Eco-friendlyness (by use of materials and energy savings… etc.)
2 - Gadgets (cheap thrills)
3 - accomodate new products, formats ( Costco style packaging in US for example).

In short: look what new problems/needs consummers face/will face with current fridges and try to solve them.