Lots of new stuff coming from RBK lately it seems. Just caught these at a few sites-

Reebok ZigTech new running shoe. Some PR stuff about what it’s supposed to do, but I’ll skip that here. Very hot I think, and one of those “why didn’t I think of that” kinda approaches… 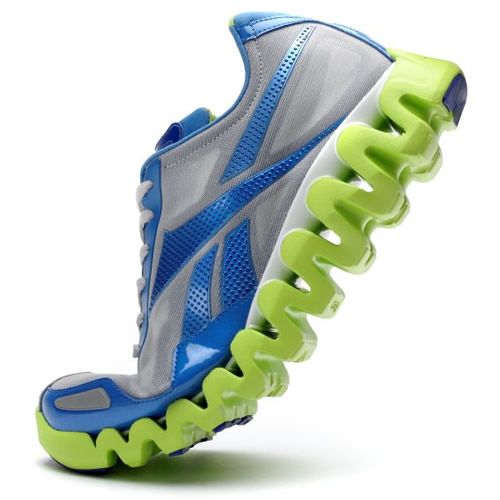 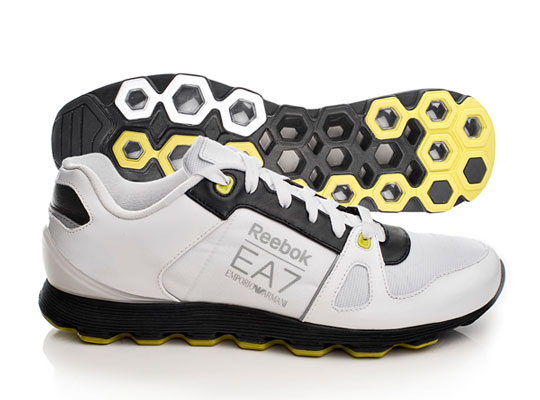 I wish reebok took as much chances on their basketball product as they seem to be doing with their running. A lot of their running product from recent years has been right up there with nike in terms of pushing the envelope of what you can do with a shoe. As for their basketball product, I find a lot of their stuff to be painfully boring, save for maybe one or two of their recent designs.

I kind of like and dislike the zigzag design. I like that its edgy and polarizing, I think it’s going to elicit strong reactions from the consumer and I can respect that. I guess it sounds presumptuous, but I’m not really convinced of its performance benefits. Looks comfy though.

Kind of a resurgence of that 90’s kind of style with the crazy midsole molding eh?

Looks like RBK is trying their version of the Nike free… 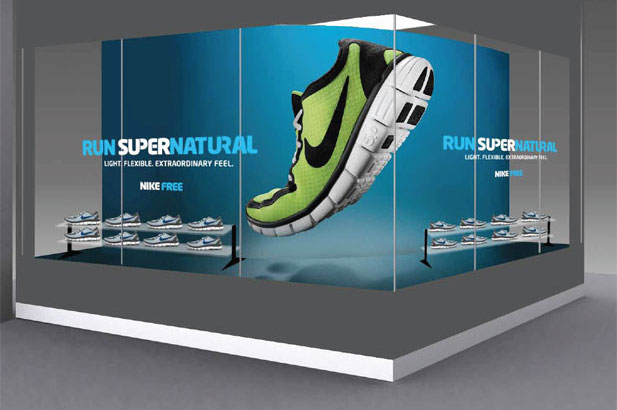 I think its a cool shoe.

But to me the sides of the zigzag sole has to few details and make it looks like playdough, cheap…
Love the upper!

actually, it looks like the ZIGTECH EVA does have some nice (but subtle) traditional running-shoe-esque surfacing , which will perhaps normalise the visually crazy appearance of the zig-zagging midsole …The EVA at the very tip of the toe does look overly chunky to me though.

I think I 'm digging both of them, though not really enough to buy. (unless I see them in some irresistable colourway or unrefusably reduced in price somewhere…will probably try 'em on in the shop at least.)

I think its a cool shoe.

But to me the sides of the zigzag sole has to few details and make it looks like playdough, cheap…
Love the upper!

Agreed. I can appreciate the somewhat dramatic juxtaposition of the refined top to the more simple and wild sole, however some more detailing would really create a needed transition between the two. As things usually go, I can imagine that the next generations of this design are going to incorporate more detailing too the sole.

I like the zigtech shoe. I see it as more of an answer to nike’s lunar racer stuff than nike free though, but definitely has similar elements to both.

Id be willing to try a pair on and get some as a summer casual shoe… a la Richard and his pink soled lunar mariahs.

i am more amazed by collaboration with EA…seems like rbk definitely came out on top of that deal to me. but i might be wrong.

Looks like they’re bringing back that '93 ID green and primer gray.

I like the zigtech shoe. I see it as more of an answer to nike’s lunar racer stuff than nike free though, but definitely has similar elements to both.

Id be willing to try a pair on and get some as a summer casual shoe… a la Richard and his pink soled lunar mariahs.

Market wise, I think it straddles the line between Nike’s Free and Lunar design lanes (Free in form, Lunar in color). But given Reebok’s reputation, I can’t believe they’ll have much success marketing that shoe to the performance crowd like Nike has both the Free and Lunar lines. Being a serious runner myself, looking at it from a design perspective, I’m very skeptical. Nike allowed me to immerse myself in information about those products with a simple Google search; the purposes the products served and how they worked. Here’s all I’m seeing from Reebok…

“This unique zig-shaped sole absorbs the impact of heel strike and sends a wave of energy along the length of the shoe to help propel the athlete forward with each step.” … and…

“Traditional energy return is focused only on the vertical impact of the heel strike,” said Reebok’s Head of Advanced Innovation, Bill McInnis. “In contrast, ZigTech is designed to transfer energy horizontally along the zigs so the athlete gets that energy back in the forefoot.”

Are you kidding me? Where’s the science? Every ounce of logic in my head, reinforced by my own experiments with energy transfer and vibration control, lead me to believe this big foam noodle from Reebok, with all it’s open cutouts, will do nothing but dampen the transfer of energy from heel to forefoot. I’m running the Boston Marathon on April 19th. I can’t wait to see how much ZigTech will be worn by runners. At my qualifying event (Twin Cities Medtronic Marathon, last October) Lunar was everywhere, and not just on elite runners who get free product.

It looks really cool though! Reebok will probably sell a lot of them!

It looks really cool though! Reebok will probably sell a lot of them!

you are right about that.

I agree with your criticism about the authenticity of their “tech”, but im not really all that willing to give nike a pass on lunar. I did some pretty decent browsing into that technology and the only main thing i found was them saying that in the racer it has the nasa seat foam that was encased in the injected eva. But other than that it was mostly just soft and light foam, nothing earth shattering. Not only that but the lunar racer is the only shoe in the luanr series that they put out that actually had that “nasa” foam in it, the other 5 or so models in the lunar line are just lightweight injection EVA.

that being said, i like the nike lunar stuff from a design standpoint and own a pair of them, and will probably get a pair of these reeboks too, but its pretty rare that one of these newfangled technologies come out and actually provide any substantive advantage over good ol cheap compression molded eva midsoles.

but yes i would like to see the sales #'s on what the lunar stuff is doing in the running market vs the sportswear market, because im in Michigan and the lunar stuff is on tons of runners feet out here too, but i rarely see any non runners wearing them around at the mall and such. Im guessing having them sell halfway decent at kohls and dick’s is what reebok would prefer over having them sell out at independent running boutiques.
Well the bean counters would at least.

Good post, dziner82. Yeah, you’re right. The lunar info you mention is part of what I recall reading about it at first. That’s really my point though. That’s all there was to say about it… how it was developed and that it had performed well for wear testers, who were, by the way, runners, not pro athlete-celebrity endorsers like Reebok’s Peyton Manning and the almost retired Allen Iverson. Heck, according to Manning, he’s just looking for something that won’t give him “shin splints!”

As awareness of Nike’s Lunar products emerged, I don’t recall ever encountering any marketing “stuff” that triggered my b.s. radar. I never felt skeptical that Lunar foam or any other foams developed for that line would deliver in ways that Nike claimed. As a result I gave it a chance. I bought the Lunar Racer early on (about 50 miles so far - 5k & 10k races only), then the Lunar Glide (about 100 miles) last September. And I’m no Nike zealot. I log way more miles in Brooks – owning the Axiom, Adrenaline (4 pairs), Revenna & Cascadia. My point is, while I still question how the LunarGlide will perform with 250 miles on the odo, I never did and I still don’t think it’s a gimmick.

If any of my Brooks (or Nike Lunars) give me “shin splints” like Peyton Manning though, I might have to get some Reebok ZigTechs.

By the way, the short sweet – yet, to the point – info blurbs on Nike Lunar were only for the Racer and the original Trainer. There’s a ton of stuff on the second wave of Lunar product. Here’s a bit on the LunarGlide… 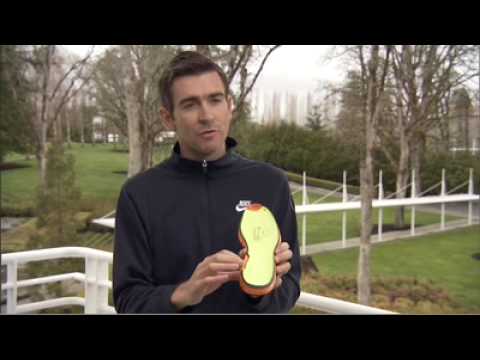 Not a big fan of the ZigZag… really polarizing, and as said before, it feels like cheap element, like someone push on a green painting tube, the feeling is not very delicate. But they have the guts to push something that strong, it’s cool.

By the way, the short sweet – yet, to the point – info blurbs on Nike Lunar were only for the Racer and the original Trainer. There’s a ton of stuff on the second wave of Lunar product. Here’s a bit on the LunarGlide…
Nike Lunarglide + Dynamic Support - YouTube

ryan,
i never saw that video, good link. Im a fair-weather runner, so ive been only on a treadmill since i got my lunar glides, im anxious for it to warm up in michigan again and get some track mileage on them to really determine how they perform, so far i have a couple small issues with fit, but nothing major.

i guess im still a bit bummed that they are using the name Lunar on so many of these shoes and i was expecting them to have the same encapsulated foam as the racers. I like the new lunar racers btw, i think the added support features will help them. I run with a pretty good marathoner that after his first marathon in them (original racers) he said they were just not supportive enough. But not like 1 persons opinion means anything really. I only run 5k’s and i have an ultralight pair of sauconys that my feet feel pretty beat up in after a race, so at least for me i guess lightweight isn’t always trump (guess that kinda relates to the pistons/nike post too).

but back to the reeboks… i do question their tech after not seeing much about it i suppose, but i think the shoes look really cool and I want a pair just to kick around in. I haven’t said that about a pair of reeboks for quite a while now, so thats a big thumbs up to them!

ill be on the lookout for these or the grey/orange.

i think the idea looks like it should be the early prototype of something that is more fleshed out and developed. it reminds me of this image in the sole provider book of a boot with springs on the heel and how it eventually evolved into the shox columns. it’s the beginning of something, but it definitely doesn’t feel like the finished idea.

adi were close too…back in 2005 there were glimpses of the future…unfortunately the marketing behind them was to bundle them up and sell them in vending machines in “design” hotels.