Finally finished my school degree and my grad project, thought I’d share it here for some feedback. My original problem I was trying to solve is to make CNC machines more accessible to people to promote experimentation to make new tool-heads, etc. There are no CNC machines that can accommodate any real modifications, and most people don’t understand how CNCs work so can’t make custom CNCs.

With inspiration from Gerrit Rietveld’s L40 lamp and red blue chair, I simplified CNC to it’s basic core elements. I removed the fixed frame (all components in one chassis) and move each axis into its own separate box. With each box having modular mounting holes, the user can easily rearrange the CNC quickly or make simple adapters for future adapters or for more various arrangement possibilities. From here I was able to make pivoting and hinged adapters to transform the CNC into a wheeled cart by using only 1 wrench in about 5 minutes.

So with the modularity, the user can attach any tool-head desired (router = typical CNC router, pen = plotter, plastic extruder = 3d printer, etc). This will promote DIY hobbyist to develop new heads, and also can replace multiple expensive machinery with only one CNC with multiple heads (saves workshop space).

The end result is a fully functional CNC machine. It needs some tweaks and need to upgrade the X axis motor (not powerful enough to lift up). I used 1/4" aluminum over all and weighs (estimated) 60-70lbs total. Some pictures below are rendering, I haven’t had time to take much pictures of the completed piece yet as been busy with graduation stuff and grad show preparation.

Any comments welcomed! And my complete process and more info can be found at http://redbluecnc.blogspot.com/ 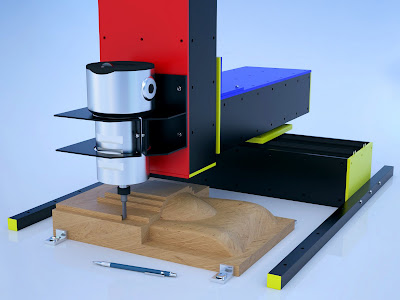 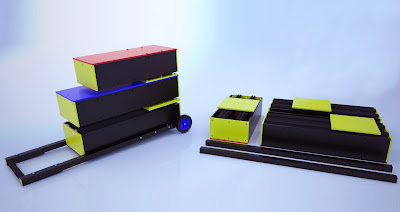 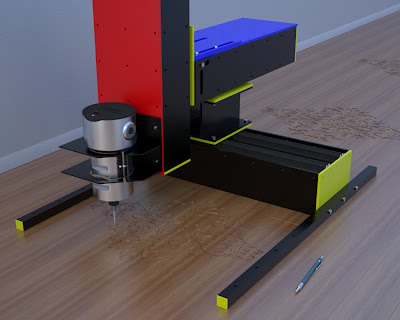 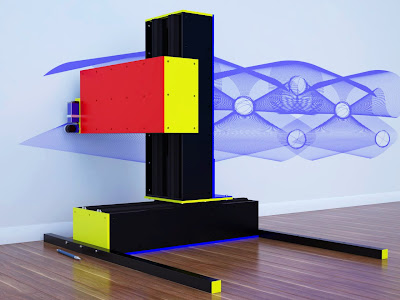 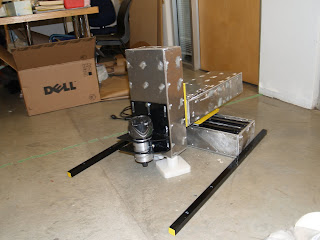 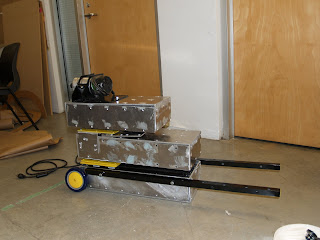 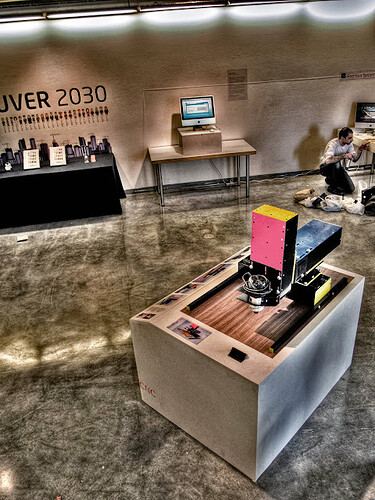 no comments, positive or otherwise?

Awesome project! Making a CNC machine is on my list on DIY projects.
I like the idea of separating out your three axis into separate modules, creates a really logical form and a much more approachable aesthetic since you don’t need the typical cage structure. The portability is really appealing and I like the way you’ve shown the different work setting with different tool heads. I have a question about calibration in your depiction of it painting a wall, how would you register it once you’ve picked it up and moved it down. Does it recalibrate itself and see where it left off, do you so that manually? Seems like for something like that might make more sense to put the whole thing on a track system of sorts, maybe similar to what they use for professional cameras.
Without knowing much about the engineering behind CNC what sort of advantages or disadvantages would this differing form create. Stability is a big deal in CNC how does removing the cage structure change that?
Post some samples up when you get that plastic extruder up and running!

I like it! I’d buy one. Very nifty idea, nice way of packing it up, though if it swiveled into that carrying position instead of coming apart and being laid on top of the kart (which is what it looks like), it’d probably be much more convenient. Still, very cool!

I saw this at the Emily Carr Grad show. Like most of the show, this piece left me scratching my head. Like the rest of your classmates, there was not an ounce of “design” shown in this project. Not a single sketch. Not much (if any) of a story of why, who, and where this idea came about. Which leaves me a LOT of room to rip into this.

Sorry, but tacking on this sentance to a project to bring context to an otherwise mundane ID project makes me roll my eyes, not say “oh, wow! Its a Red Blue CNC machine! Cool!”.

The positive side, is that I see this as an excellent tool for ID. IF this is a functional CNC machine, you have a great project for an engineering project that could turn into a saleable product.

For me, this is an Industrial Design Fail, Enginering Win.

I have to say that for graduate project I would think you would want to show you’re design style as much as possible, and in this project you show rietveld’s style.

This would be a good project if the point of the project was to take an iconic design style and use it in a different product category, which is a normal ID project in school.

I feel the design is in the simplicity of the object and not just a reworked object for an entirely aesthetic purpose. Through this, it highlights the beauty of the forms and functionality of the piece.

The influences are obvious and people seem to feel that this can some times be too easy and too obvious overseeing to design itself.

I feel the design is in the simplicity of the object and not just a reworked object for an entirely aesthetic purpose. Through this, it highlights the beauty of the forms and functionality of the piece.

The influences are obvious and people seem to feel that this can some times be too easy and too obvious overseeing to design itself.

This is a super cool project. I love that it can do designs with ink on the walls and carvings on the floor.

What ever happened with this nicanor?

This would be a great machine, I wonder the same thing - is it possible for you to build and sell these or do you know of similar machines? They seem better than say a myDIYCNC.

Make them a different color or style altogether though, this almost makes me cringe and the yellow is used too much and is not the right yellow to have the desired effect of the De Stijl movement, who with the yellow wanted to extend the shape into space.