lot of talk about big items. designer items (mice, keyboards, screens, aso). not much about small stuff. or unusual stuff. i ordered a couple of these fans: 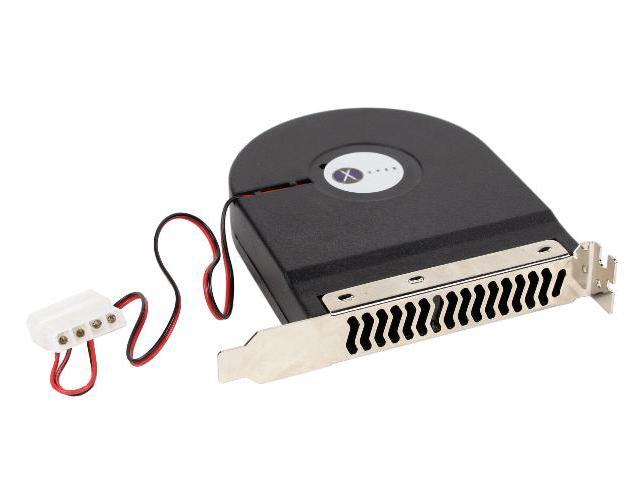 first went into new machine. next to a 6600GT ($200 latest “gamer” card from NVidia). except i got AGP version instead of PCIe - extra chips. extra heat. extra worry. fan installs crappy imo. doesnt plug into slot so isnt secure in place. but okay. does move air though. alot of it. all right off the videocard. and its pretty quiet.

second one went into old dual cpu machine. next to FireGL2. PC wouldnt start. only a 300W power supply. dont know how much the fan eats but it ate too much. even disconnecting another case fan. just FYI. i’ll be upgrading PS so i can use this fan. worth it to keep components cool.

at $3.50 this item is worth trying. recommended.

I never thought I’d see this product on Core77. I have one of these too. It’s pretty wild having four fans in one computer. I put mine next to my Nvidia Ti200. Seems to work well, but I never had problems before.

I don’t like how it doesn’t click into a slot too. Also, I had to redesign mine for my previous box. The slot I wanted to use was close to the wires from the power supply. I had to remount the fan on the it’s bracket to clear the wires. I changed it back when I got my new box.

the older Oxygen GVX-1 i had didnt run too hot. the FireGL2 probly does. 6600GT i know will be hot. extra power plug and all. i hate running air conditioning in the summer. get headaches. dont want to liquid cool the machines. but this fan might solve problem.

hoping people post other nice little accessories. smart solutions. those are sometimes the most fun imo.

there’s another product like that made by VANTEC, which mounts and is powered by a PCI slot.

my own favourite accessory would be a belkin nostromo N52 gaming pad
http://catalog.belkin.com/IWCatProductPage.process?Merchant_Id=&Section_Id=200345&pcount=&Product_Id=162783&Section.Section_Path=%2F%2FRoot%2FNostromo%2E%2E%2EingTools%2F

a similar product to that is the “wolf claw pad”
which also combines an attached keyboard, for those neccesary “no0b” spam typing bursts during a game of counterstrike on a kiddy’s rats server…
http://www.wolfclaw.com.sg/product.php#