Ok for all the trans oceanic fliers, which one do you recommend?

For wireless headsets, will I be able to use it on the plane? It has a receiving base, does it mean I have to plug it into the wall?

The reason why I want to get a wireless one is so I don’t have the wires tangle up on the plane and such. It will be more convenient for home use too.

I always wanted a wireless headphones for my iPod. I was recomended this.
i Phono by Bluetake.
http://www.ipodlounge.com/reviews_more.php?id=4377_0_6_0_M 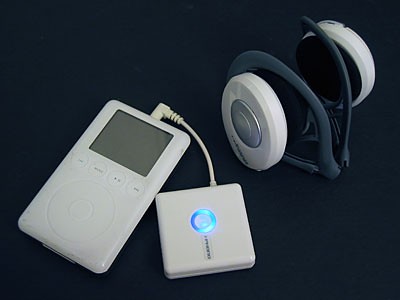 This thing is really cool. I think you can use it with your cellphone, computers, and other devices too, it can be used with any device that has a standard stereo headphone port, including non-Bluetooth computers and audio devices other than the iPod. But the price of this thing, is pointless. I think its something like $249. Thats the price of the iPod mini?

I doubt the FAA will let you use wireless headphones on one of their planes. Because there is a transmitter involved it will throw a signal in the same manner a cell phone would “theoretically” interfer with the guidance system. Personally I think it’s all crap. I am hearing that planes are being outfitted with local cell service (for a FEE), so how much could it REALLY interfer with the plane’s systems?

But in the mean time, I’m guessing you’ll get busted by an above average intellegence flight attendant.

BTW - Like most iPod accessories, these are ridiculously over-priced.

That’s true about the wireless transmission part. However some airlines are installing wireless broadband internet on their planes recently, so I wonder how that will conflict with the communication.

I think I will have to reconfirm if I can use wireless on the plane, but in the mean time, I also need to know what’s recommended.