Recently completed a concept design project focused on emergency lighting in the home for power outages. It’s a quick project, but wanted to explore this market. It was fun to work on, and pretty happy with the result, but always looking for some feedback on process/ result/ anything!

Ryan, Are you looking for feedback on the project? On the presentation? Just sharing?

Would be great to get feedback on the project and presentation. Thanks!

Thanks for the feedback.

The gps messaging system can be preprogrammed with two messages that can be transmitted therefore the two buttons on the control. This would be preprogrammed with a computer ahead of time. Also, the alert, and SOS modes are used to message local authorities when the cell networks are down. The power cord can be detached to reveal another plug - basically a male to male power cord.

Do you leave your grundig charged? I’ve found that over time the emergency lights lose their charge and when it’s time to use them, you have to crank/squeeze like crazy to get them to light up/ hear the radio. One of the goals is by designing it for the day to day is that it will stay plugged in and ready to use. When it’s done with charge it’s done with charge.

The process sketches should now open to a lightbox.

From a process/presentation standpoint this is a really strong professionally presented project. The final in situ rendering is beautiful and captures the idea that this is something someone would be proud to display in their home. I like the branding and the cohesiveness between the final forms and the CMF decisions. I like that your sketch pages are all communicating different solutions/ideas not just form explorations. This is something I wouldn’t mind leaving on my desk and just having it around to look at; or potentially use as a backup bluetooth speaker?

I grew up in a country with frequent black outs. They suck, and the worst part about them is not knowing if it’s going to be 30 minutes or 30 hours. That being said, I agree with Keno, this is begging to have a hand crank or some secondary power generation method in case the shit hits the fan.

The second you decided to include a red “SOS” button you’re signaling to the consumer that your product is going to help them in the worst of cases. It can’t do that if my 3 kids just drained it over 12 hours of iPad recharges.

I definitely think you accomplished your goal of making an emergency radio that’s beautiful, but unfortunately you removed the one core feature that differentiates emergency radios from any laptop with a partial charge. I think there are elegant solutions for this, and resolving it would elevate this project from “professional” to memorable.

Super intersting point of view and definitely a point that I wrestled with was whether or not to include a crank or some type of generative system…No question there is value in crank for a solution that focuses on light and a radio and I understand there is a strong association of emergency radios and cranks. They offer much more mobility while sacrificing battery life. On the other hand, this project focuses less on mobility and more on battery life.

In some ways the approach is more similar a computer battery backup where there is no crank or otherwise: 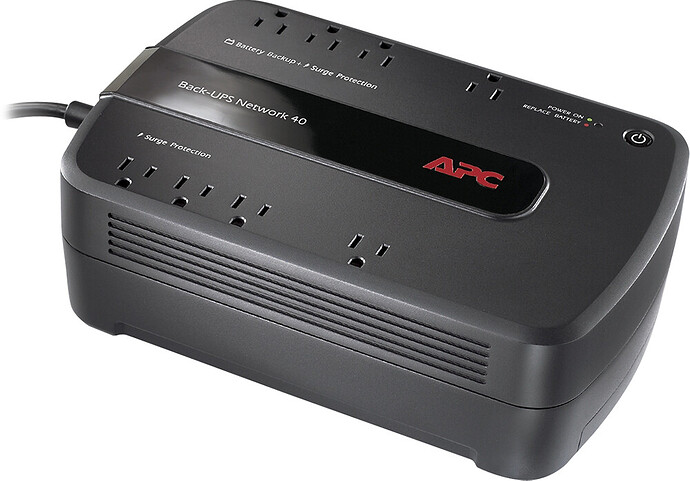 The question for me became the goal of the crank and it’s expectation from users. It’s difficult to generate electricity to charge electrical devices using a crank, so a crank could be used for illumination and radios, but it starts to fall down when you expect the system to charge iPads or laptops beyond the life of the battery. It could become frustrating from that point of view. A portion of the battery could be reserved solely for the sos button.

In some ways the crux becomes how users think about battery life between light/charging devices/radio/communication. There definitely needs to be some additional piece of feedback to users in regard to battery life.

Overall, looks nice. But I’d challenge the design form with respect to purpose. I can see this as something to maybe bring to the cottage, or as an everyday use item, but it looks far too soft to be something I’d want to rely on in an emergency. It doesn’t look robust, strong, or “trustworthy”…

Maybe I’m reading too much into the emergency situation. Clearly in the photos, it is just charging a non-essential iPad on the sofa, not a life saving system in a war zone. I would just question then the pitch and function of the SOS, and radio features. In an emergency, a light is nice (like the one you’ve got plugged into the wall or the main unit), but what do I really need a radio for, when I have my phone? More people now I think check Twitter for blackout info or FB than some sort of emergency broadcast. My phone has GPS, why do I need another device and would it even work inside (My Garmin GPS doesn’t get a good signal in my loft, would this?)? What is the GPS for? Who does SOS call? The National Guard?

I live in a big city, so we don’t have blackouts that often, but when they do due to weather (it still is Canada here), the last thing I’ve thought of is to find a radio. I just hope my phone is OK with enough batteries to waste time on FB and hope I have enough beer in the house

Can you elaborate more about the scenario for this? Who would buy it and why? When is it used? How often? How is it different than just an all purpose external battery that can charge anything from my phone to a car battery?

All that aside, the ID is nice, but doesn’t blow me away. For something like this I’d really like to see the small details, textures, finishes, branding, graphics…otherwise it’s just a white cylinder.

Same here but I think your project premise got broader and broader.
Aesthetic is nice until you added all those visible buttons and ports etc. Why are they exposed if you only use it a few times a year?
It seems like you wanted to do the “the coolest cooler” of emergency lights. It basically does everything from lighting, charging, communicating, & looking good in your home.
We have had a few blackouts this year (2 or 3). My biggest concern was having a light for my kids. The Ray would be really cool to make them feel safe and comfortable or even fun instead of your typical Maglite, makita shop LED light, or digging for candles. I think the longest one was about 3 hours. For this “typical” use the text messaging, radio, and GPS functions would be overkill. I think enough battery to charge one or two phones would be sufficient…it would force me to enjoy a few hours unplugged.
If it’s longer than 4 hours chances are that: a) you’ll go to sleep b) the sun will come up c) you bust out your gas generator to power your fridge, etc.
I would say narrow down your scope to a “black out” lamp.
If you really want the extra functionality and charging power then re-design one that you leave plugged in your garage, like a camping powerpak.

Just came across this product. Reminded me of your, specially since somebody mentioned it should also be a speaker.

Yup, yup. It’s definitely meant to be used in the home where it’s not a crisis type situation.

The radio and gps messaging are meant as a backup to when cell service is down. For example, Hurricane Sandy wiped out cell service in nyc, and that’s why many took to twitter to communicate. The two buttons could transmit pre programmed messages to loved ones to let them know you’re okay, etc…and depending on the users situation (need/ location/ resources available) the sos button could send an ambulance to your area.

The main difference between this and a big battery is simply the integration of tools that you need during this scenario. My hypothesis for this is that by making something that users would use on a daily basis, that there is a greater chance of being prepared for a power outage when the time comes (i.e. it’s always plugged in and charged). There’s always a risk of the pairing a chosen appearance as something you would want to accent the home with and a technology that you may need.

Ouch! coolest cooler reference! haha, this is why I didn’t want to say it’s a bluetooth speaker/ it’s an inductive charger / etc… it’s a balance of too little, where some things already exist in the market (muji does a nice lamp that senses a power outage then turns on) and and too much. What’s the sweet spot?

Sorry about the coolest cooler analogy, it’s definitely not that extreme. I just find it easier to pair everyday lamp w/ bluetooth speaker than an everyday lamp with SOS emergency.