Anyone have any experience producing prototype parts in a cast PVC?

Background:
We are working on a project that involves bonding a semi-rigid pvc part onto an inflatable pvc bladder.
Similar to the PVC skeg on the inflatable kayak below.

The catch is… in order to achieve the best bond to the inflatable pvc portion - the part being bonded should also be PVC.

I am aware of roto-casting PVC for vinyl toys - but this application would be more a simulation of an injection molded part.

Some approaches that seem possible:

If the draw isn’t bad, vacuum-form from PVC sheet stock.

If the draw is bad, vacuum-form each side, glue together.

A bit more information to add to my original post.

For round 1 of prototyping we did CNC rigid PVC. Unfortunately it is too brittle - there is a fairly thin flange where the PVC component is bonded to the inflatable component. A PVC “patch” is then glued on top to cover the seams. Our CNC’d parts were breaking during testing.
The prototypes that we are making are being used for some safety testing so the components simply can’t break.

Some good news to report…

Thanks for the suggestions!

It does seem odd that none of the big vendors - Protmold etc… offer low volume PVC. I know that it is possible to order “hot pour vinyl” PVC that melts on a stove-top to make your own fishing lures (and s3x toys) It seems that this is only available in very low durometers though.

Re: PVC prototyping. Why not just cut a cheap, single-cavity, aluminum mold and injection mold a few out of PVC? What’s that part weight? An ounce, or two, maybe?

It’s pretty obvious what you’re building… cool idea. I’m a big guy, around 250 pounds. Just curious. How you are providing the longitudinal strength to resist buckling in the middle of the board.

It’s pretty obvious what you’re building… cool idea. I’m a big guy, around 250 pounds. Just curious. How you are providing the longitudinal strength to resist buckling in the middle of the board.

Well… one day once we’ve released this product I’ll post it on here and we’ll all have a laugh - as it really isn’t what you think it is - and seeing a 250lb guy using it would be quite the spectacle.

My firm has done a bunch of work on inflatable kayaks, paddle boards, docks and as a result of this work a company in a totally unrelated industry has asked for some design assistance testing a device fabricated using similar technology.
It has been pretty easy to use the kayaks and paddle boards as a reference here on Core77 because the construction is essentially the same. When prototyping marine recreation products the cast PVC parts are much less of an issue as most handles and skegs on paddle boards and kayaks are pretty much “off the shelf”.

I have done some work on paddle boards in the past - and to answer your question…
The inflatable bladder on these boards is constructed using drop stitch PVC fabric. Essentially two sheets of PVC connected with hundreds of strings per square inch of a specific length that when connected with a sidewall and inflated act in tension to create a stiff chamber.

In the image of a factory sample below the sidewall is clear showing the strings and a plush cover has been added to the top of the PVC sheets.

Uli manufactures a few varieties of these (not designed by us). I took a quick look on their site but couldn’t find a weight limit.
http://www.uliboards.com/ 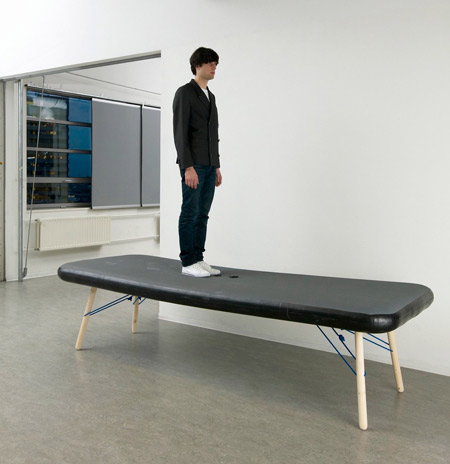 In the end it looks like we are going to make do with cast urethane parts for now - and use the aluminum tooling method as suggested by Lmo once we get into a little bit of volume.