Hi everyone. I am working on a project of a structure for solar panels which requires custom aluminum extrusions, and I was wondering how I could prototype them. I was thinking of machining them, but the profiles may be a bit too complicated and the extrusion too long, and expense of this is an issue as well. The prototype has to be constructed with the final materials, but not necesarilly withstand the stresses and strains the final product would have.

Do you guys have any suggestions? How is it normally done? Thank you.

Is there an extrusion that is similar already that could be modified to get close? Are you only prototyping the aesthetics? Or are you prototyping the function as well? Could it be approximated by a few pieces of square/round/angle extrusions?

Prototyping function aswell, mix matching different catalogue parts could be a good solution. The part is not determined yet, but I am thinking of something With similar characteristics to this. 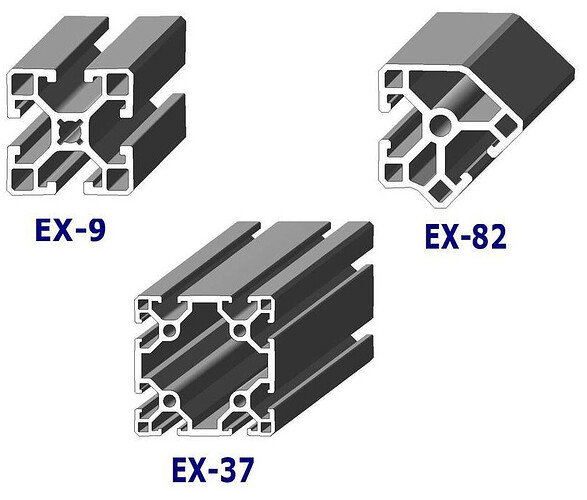 So, what kind of lengths and cross-section dimensions are you talking about? Portions of a foot, many feet… .?

I’m thinking 2 meters for the prototype.

I’ve built several models of extrusions for a company. But their product(s) used them as heat sinks; basically an 18" long, cylindrical form, with emanating fins and a not-too-complicated internal details. I used a combination of ABS and PVC materials. But they were nothing in comparison to what you need.

How is it normally done?

Aluminum extrusions can be prototyped by companies that do extrusion work, but of course it’s not cheap; and it will not include the cost of a “minimum” run, or the actual extrusion itself (“extrusion” is usual kicked out in 20 foot sticks). Nor will it included the cost of shipping and handling.

If the elements of the structure are a total of 2 meters, machining would appear to be the logical alternative (if the internal structure is machinable (no holes incorporated)).

As you mentioned, you can cobble together standard extrusions to make a “custom” extrusion. The problem will lie with bonding the parts. Welding thin pieces of aluminum over 2 meters will cause a great deal of warping. You may be able to straighten it after welding but I think that would be unlikely. Tack welding will solve that problem but you won’t have the strength as a solid piece.

If strength isn’t that much of an issue, you can epoxy the pieces together. Or even lower tech is double-sided adhesive.

I’ve worked on ladders and scaffolds that used mostly extruded profiles in length you are talking about. For mockups we used milled wooden planks (assemble several into one profile if you must). For strength evaluation some similar profiles. For ergonomics and aesthetics we SLSed sections (after the usual worskshop ideation stuff). Keep in mind that an extrusion tool is not that expensive and it might be cheaper to risk it when you’ve come long enough, it can be cheaper than making the SLS sections or spending the time (=money) on problem solving the prototype. Just figure out what it is you want to evaluate.

If strength isn’t that much of an issue, you can epoxy the pieces together. Or even lower tech is double-sided adhesive.

Prepared correctly, something like Lord Maxlok works very well, and claims to be as strong as welding.

Chris… I used to use the shit out of Lord Versilok while I was with Vetter; we used it to bond ABS fairing shells together. It too is a structural acrylic adhesive originally used to bond fighter aircraft elevon skins onto the subframe. It would be great for this project but it is not cheap however (but then, when is the good stuff ever cheap?).

Killer stuff and gap filling to .5" (any thicker and it’s prone to ignition)

Bonds fiberglass to fiberglass, FRP to aluminum, aluminum to aluminum. ABS to PVC, plex, polycarbonates, and almost any combination there of. No PP, or wood however. I can personally attest to it being as strong as welding.

I became somewhat addicted to it’s use in that we bought it in 55 gal. barrels.

Lots of good solutions, thanks to everyone for your suggestions.

Didn’t know Versilok was gap filling… this changes everything.

I had a window crank on my '77 El Camino break one afternoon; typical die-cast zinc alloy. I took to two pieces, ground a crude 45° bevel on both side of each piece, slathered on the Versilok, and then positioned it on a piece of wax paper (so it wouldn’t bond itself onto the bench top).

Versilok kicks in around five minutes. At that point is was just a matter of sculpting the shape back to something resembling the original contours. I gave it a few hours of extra cure time just because it was going to be high stress joint. That repair was still in daily use ten years later when I sold the truck.

Typical ABS sheet material perpendicular “T” joint; prep the leg of the “T” with a bevel, position using square, or blocks, and tack parts together with cyanoacrylic adhesive. Mix Versilok and form required radius fillet to both sides. Done.

What’s your circle size? I’ve got a couple extrusions in very low volume production right now. Die costs were $900 & $2200, both less than 4" circle. I’ve got one shop that can do very short runs.

In my case, the one bigger extrusion was hollow, kind of complicated, and would have been impossible to machine. But I’ve got 200’ of it for around $5k (including die cost, fabrication fixture, and some fairly involved end machining), so it kind of depends on your prototyping budget. It might be cheaper just to have it extruded, and modify or replace the die if you need to make changes.

Scott,
Could you let me know the company that you’re using for short-run extrusions?
Brent