When I first started doing footwear, one of the most difficult things was gaining an understanding of proportions. I put down some basic silhouettes here: hope they help somebody.

When I first started doing footwear, one of the most difficult things was gaining an understanding of proportions. I put down some basic silhouettes here: hope they help somebody.

thanks yo. quick question, to what extent do you think about proportion when you are sketching footwear? how important is it???

always thinking about proportion. Footwear is one of the few product categories where the consumer wears the product. People in general are pretty sensitive about their feet. I’ve had experience where a shoe will stand out from a distance as a really unique design, I’ll try it on, only to have it look horrible on the foot. Other times I’ve been given shoes and been like, I would never buy these, popped them on and though, man, these are sweet. Proportions.

People in general are pretty sensitive about their feet. I’ve had experience where a shoe will stand out from a distance as a really unique design, I’ll try it on, only to have it look horrible on the foot. Other times I’ve been given shoes and been like, I would never buy these, popped them on and though, man, these are sweet. Proportions.

i have found that most people are pretty indifferent when it comes to their feet, most people do know what kind of shoe fits them of even their correct shoe size for that matter. i too have had that type of experience too, but can you automatically that up to the proportions of the shoe?

in asking how often you think about proportion when sketching an idea, i meant like are you every time thinking it has to have the proper proportion for its category (toe spring, arch height, possible cushiong, etc.)

maybe a better way i could ask it is what do you think about when come up with sketching ideas for new kicks?

JB, there is a difference between what people are aware of and what they can articulate. Usually when they think a shoe looks wack, it is the proportions of things they are responding to.

I’m always trying to think about it. Lets say I want to do a sleek trainer. Sleek compared to what? A hiking boot? A cross trainer, a fashion slip on? It helps to know what the norms are (in everything, not just proportion) so you can push beyond them in a way that makes sense to the consumer and aligns with your goals for the project. Otherwise its just another drawing of a shoe. You can get by on that for a little while but eventually you fall into a predictable pattern yourself without realizing it.

The way I try to do it at least.

that makes sense, i guess i never looked at it that way. i just kind of chug along until things look “right” (which is not often unfortunately for me)

thanks for breaking it down yo

yo please fix the link it aint werking. Ta

I have a little suggestion that probably would help many others. I think many people have trouble with the outsole. So from those sketches you made, possibly make some outsole sketches to go along with it as proportions on the outsole are somewhat hard to get. Maybe also throw in some heel view sketches. I think some people like me, can get a decent proportioned lateral view going, but when it comes to translating the outsole from that view, it seems a little off.

good idea, I will try to get on it when I get a moment!

Get some old lasts (ebay is a brilliant place to look - but do search for other terms, foot molds, foot forms shoemakers molds etc. as well as lasts because most people don’t know the correct terminology).

Set your own still life up and practise sketching them from different angles. Feet are a weird shape to get right - if you practise drawing the lasts,you will soon notice an improvement in your footwear renderings.

We had to do this in the first year of our footwear degree.

When I am in a hurry I have been known to trace over a jpg of an existing shoe in Adobe illustrator (I sometimes do this in the factory,with the last I’m going to use) Because I am so often pushed for time, it saves me the time of spending ages getting the proportions right before I sketch the design out.

Remember as a designer it is your ideas that count - use all that is available to you and all the tricks in the book to get your ideas on the page in an accurate manner. Cheating is completely and totally allowed.

yo, my last design for the nanoglide shoe, it looks really triangulated, but so does my dads foot (drew it based on it) now for the brand beckham football sneaker i drew it over my foot, and i realised how much of a difference it makes- so my doubt. how does one shoe fit so many different people with so many different feet.

They fit multiple feet because shoes are made of soft materials.

Shoes are not built around anatomical foot forms (except for Birkenstocks), they are built around stylized foot forms that have their roots in traditional shoemaking that goes back hundreds of years. This is why if you draw over actual feet, it will not look right.

Nike tried to move to an anatomically based last in the 90’s with the Nike Footscape, it was rejected by the general public for not looking shoe like enough. The free products use a last that is much closer to an anatomical last but balance just enough of a shoe look. 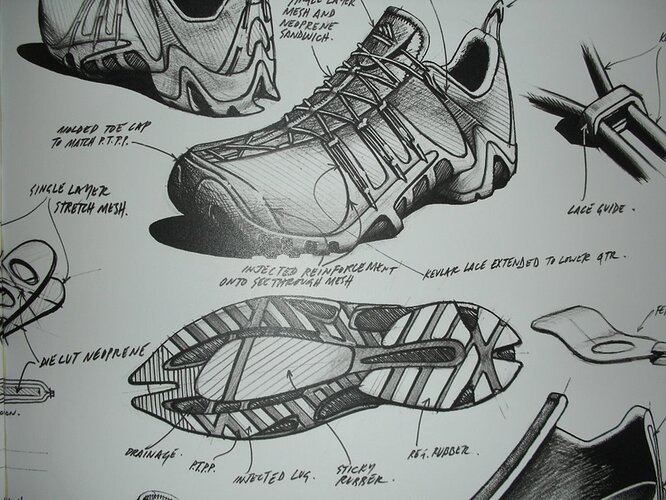 do you think these guys sketch each of these angles out themselves or have some proportion guidelines and then trace and repeat?

I gotta say, that perspective is pretty dead nuts on and the line quality is really tight in that sketch. (I ordered the book too)

When I do those 3/4’s, I usually start with a photo of a last as an underlay. It seems to work. If I don’t have a last, I just take a pick of a shoe that is a similar proportion, it might be cheating, but it works.


and thats how the shoemaster software (developed by Clarks) works, (kind of).

First of all, you digitise your last and then you design directly onto it.

http://www.shoemaster.co.uk/
I had some training on this as a footwear student, that was years ago. But I’m about to undertake a freelance project with a company that uses it for orthopaedic footwear. I’ll let you know how Iget on.

Do any of you guys design directly onto vac forms out of interest? Some Factories I’v worked in love it because they can take the standard straight off your design without misinterpreting it

I’ve sketched on vac forms as well as tapped up lasts, especially for a tricky asymmetrical pattern, it can be hard to communicate it in 2d. With the tape up a pattern engineer can un-tape and flatten it to make the pattern as well.

Good stuff. Thanks a lot.

hey YO
How cool of you to link that page with your ideas/info. on perspective, etc. I know a lot of people really appreciate that. It’s nice to see someone sharing their knowledge and experience with their fellow peers.