Last two days on Gizmodo features silver products with an undulating line texture. I think this is recent…anyone else noticed it? 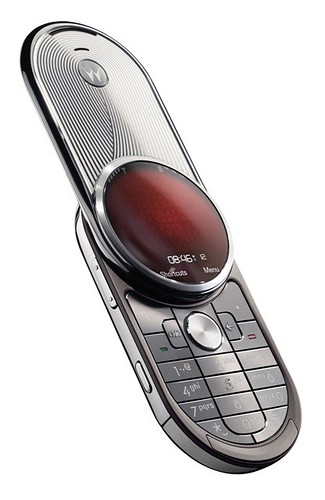 I like the Aura phone texture the best because it seems more deliberate. The samsung almost feels like an afterthought. “The inside of this looks a little bland, how can we spice it up? Textures!” Like someone learned how to make patterns in Solidworks that day, so they used it.

I meant the Samsung

They both remind me of art deco/machine age stuff, especially the Motorola Aura. When closed it looks like it could have been made in the 1930’s. I agree that the texture looks like an afterthought on the camcorder …

Hmmm…1930’s graphic design at the Dem. convention, now 1930’s aesthetic for cel phones? Can we call this a trend?

Mexico City Olympic Games logo came to mind. It is a very elegant detail on the Aura.