Hi guys, it’s been a while. I’ve been designing a lamp, based on an idea I had when playing around with a childs toy. I was trying to improve on the functionality of the Anglepoise lamp. Not sure how successful I’ve been? The lamp goes very floppy when you release a cam, so that it can be easily pulled and twisted into any position, then when you engage the cam, it locks and goes rigid. Having built the prototype, there’s loads of improvements to be made before a production version could be built, but the basic principal and functionality is there. It’s best explained in the short video here: 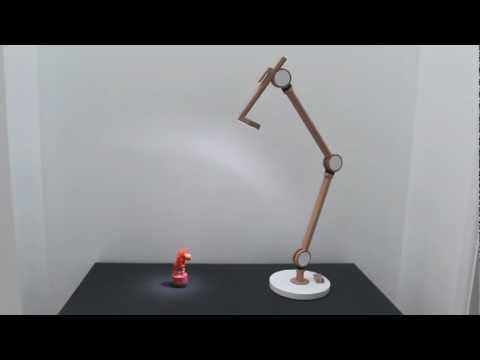 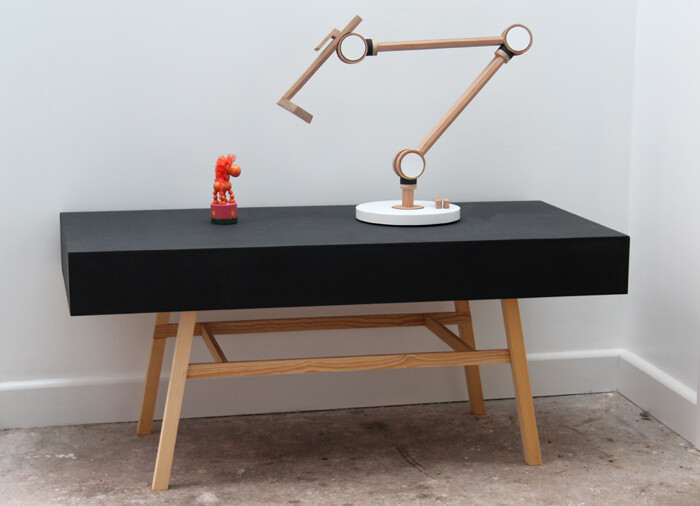 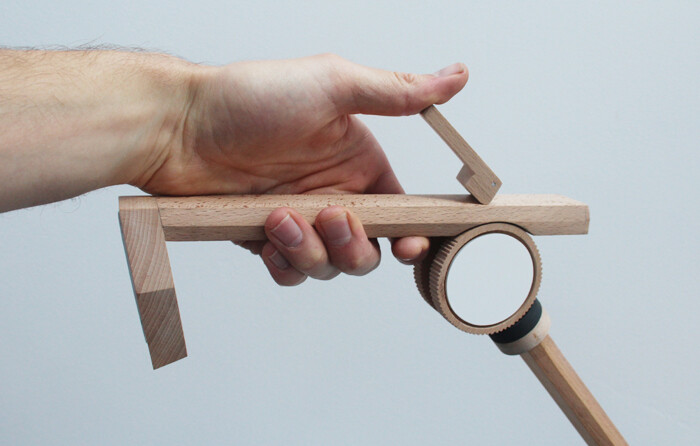 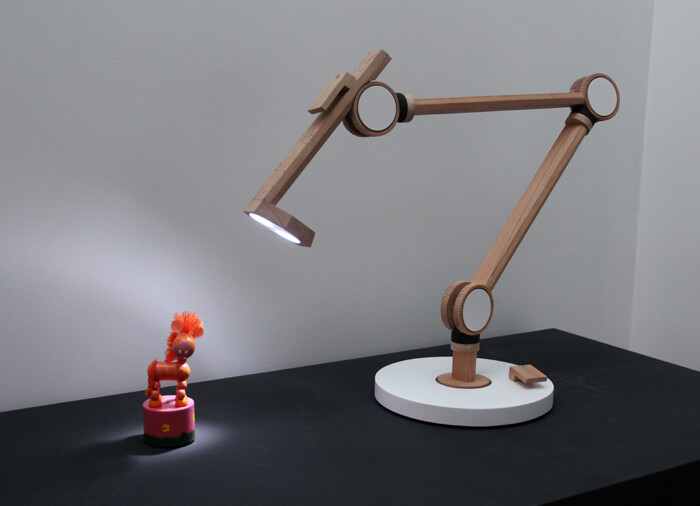 As usual all comments, positive or negative, very gratefully received. This is usually the point where one of you says something and I think…Ohhh, I wish I’d considered that before I released it! PT

Only thing I’d prefer was if the shape of the light head was circular like the base. Maybe white too. Think it would better match all the disc shapes you have going on.
Now it seems out of visual balance being off center and kinda small.

Good stuff. I like how the clamp is where you hold it. Smart one handed operation. Does the suction base actually work?

Very nice. The video explanation is perfect as well! Personally, I’d love to have something like this. Looking forward to the next rev on the proto. In the video, it looked like it could be more robust. Do you intend to make it out of wood, or move to metal?

I agree with Richard on the lamp head. It seems like it wants to be round, like these guys: 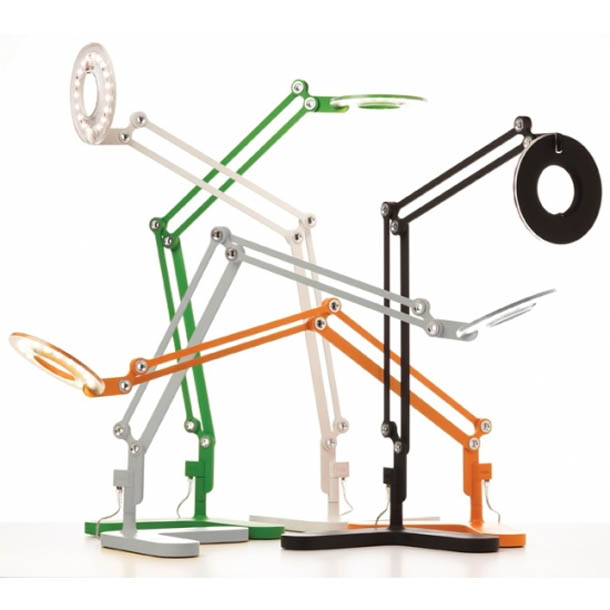 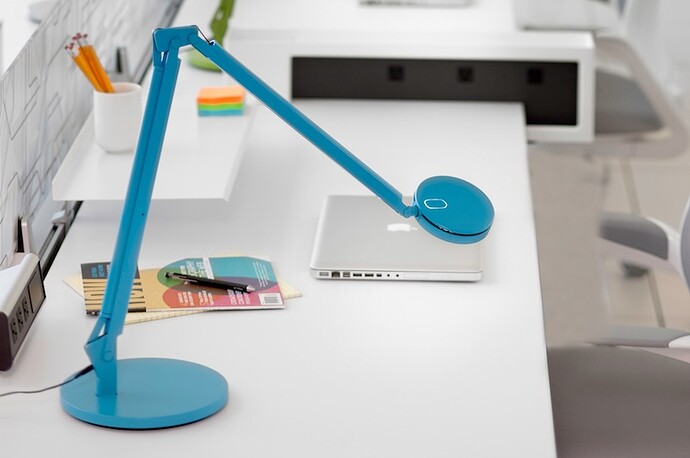 Dash-Details-LED-Task-Lamp-colors.jpg800×532 60.7 KB
Or you could have the LEDs placed on the uppermost arm like this one: 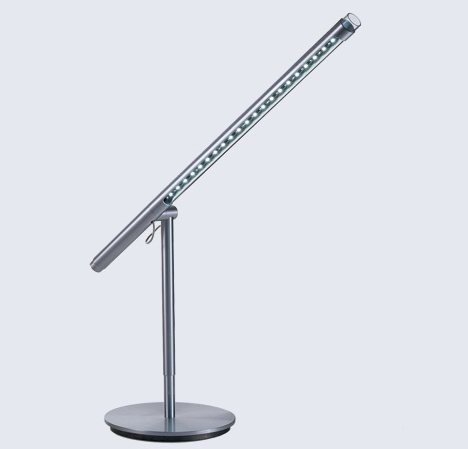 That’s a great idea. What are you using to create the tension in the assembly? Can some of the floppiness be fixed by going to a less elastic material that can hold more tension? I’m thinking thin stainless cable maybe, but that might not work. I really like the look of the wood, but I think you’d have some wear issues over time. Any wear in the joints or cam will loosen the whole thing up.

Awesome! Are you producing it? Althought it did look a bit unstable, it doesn’t look impossible to fix that, looks like it’s mostly the bottom joint that needs to be reinforced. And even if wood looks cool, it looks like the same design could be produced with 2 extruded aluminium profiles (arms and joints). Light, stable, durable etc…

Curious - you’ve posted several amazing concepts that seem to be fit for production over time - does anything come out of those? Kickstart this lamp! Great work.

PS. Can’t stop thinking of other products the toy concept can be applied to now

Hi Guys, thanks for the comments. The arms have a chamfer each side, so when it came to the head, I carried on this chamfer to produce the head shape so that its integration with the top of the part you hold would be seamless, I was also considering round, it has to be off centre a way to not interfere with your grip. I was trying to be a little different, maybe went too far.

Would love to make the LED array different too, but I bought two cheap torches that I took apart, which sufficed for the prototype, this would be handled much more sympathetically in production. For the prototype, inside the wood arms are aluminium tubes that guide cables and wiring, but in production I would aim for all aluminium or a tough plastic moulding to make it much lighter.

There are a few engineering issues that are easy to fix. In production the locking areas would be detailed differently to make them non slip and non wear. I know how, but without access to a lathe I currently can’t do it. Scott, the tension in the prototype is created using 15lb breaking strain fishing braid. Thin cable approx 30lb would work a lot better, this is also an easy fix. Changing the materials will help prevent loosening up over time but also there is a tensioner in the base - like a guitar head to help you tune the locking pressure and counter wear.

R: My mum has an old meat mincer with a suction base that would have worked perfectly, but I wasn’t allowed to destroy it to fit the prototype

, so for the video, I had to design and build a table just so I could screw the lamp to it for demo purposes. Funnily enough I wasn’t allowed to drill a hole in an existing table we own either!

So it seems wobbly, because I designed and made the table in about 5 hours and construction wise…there were issues. I’m always up against time (weekends) and the weather (the UK is famous for it).

Engio - Kickstarter last I heard was USA only, ROW has indiegogo, but it doesn’t seem to be quite as forward as Kickstarter from a design point of view. I just keep coming up with ideas and releasing them on my site, which is kinda foolish, but my problem has always been I can’t focus on one thing long enough. Yesterday kitchens, today lamps, tomorrow???

I really like the look of the wood, but I think you’d have some wear issues over time. Any wear in the joints or cam will loosen the whole thing up.

R: My mum has an old meat mincer with a suction base that would have worked perfectly, but I wasn’t allowed to destroy it to fit the prototype >

Old adage to live by tank… “It is easier to beg for forgiveness, than it is to ask for permission.”

Lmo, wood could be kept as the main material as long as all the bearing areas/surfaces were in a harder wearing material. It is also comparitively heavy compared to other materials and could take longer to produce/finnish than a moulding in plastic. If I can take this further, I’ll put you down for the wooden top of the range executive version.

You haven’t met Mother Tank, very fiesty when you destroy her things. From experience, I’d like to add to that old adage…“It is easier to beg for forgiveness, than it is to ask for permission, unless you live with Mother Tank, if so, ask for permission or you’ll be sleeping with one eye open for a very long time” She lives by that other adage…“revenge is sweet”

No problem. Always a pleasure to highlight good work!

I keep coming back to look at this. It would be gorgeous with aluminum extrusions for the arms and investment cast knuckles. I wish we had the ability to produce something like this right now, I’d do it.

Thanks Scott, I agree, aluminium is the way forward (with a wood version for Lmo). There isn’t really that many barriers to production, it’s just finding someone with the production/manufacturing capability.

My vote is also for wood. With the simple human interaction lew put it best- its just more human. In aluminum it’s just another desk lamp.

Your design lends itself to multiple materials and colourways as well. I like wood and metals mixed together, nice contrast.

Probably wood for the LED housing is not good as those bright LED’s give off some heat and thermal cycling on wood may crack it, or it might burn. Also wood cam levers seem like a bad idea as breakage prone.

I don’t like the suction base as these always seem to not work well and quit sucking after a year or so. Also, in this case, until I watched the video, the suction cam lever appeared to be an on off switch.

Hey Pier and R,
Thank you for your comments. The suction base was added as a way of explaining how the lamp could become very moveable when the cam is released without dragging the lamp from its position. I couldn’t show the movement and flexibility in the video without fixing the lamp base to the table (it was made in plywood and isn’t heavy enough) and it was simple for the purpose of story telling to put in a suction base (it was a last minute descision). My prototype designs are always a balance between what I ideally want aesthetics wise and what I can make in my shed and demonstrate. Production wise there would be a difference. To get away without suction, I have to have a heavy base and very lite arms and head, which is difficult with wood arms because the material weight means if the lamp is extended too far away from centre it may fall over (always dependent on how heavy the base is). I thought hollow aluminium extrusions might automatically make things easier. Even if they are not as beautiful as wood, they are lighter? But I will have to do some calcs. I’ve also been considering a form of concrete/stone/slate base.

Now that I have a basic working model established, I will take all your comments and suggestions on board, look at weight reduction, heat/safety etc and (hopefully) make lots of improvements. PT

really love the concept! hope to see this in production, its a shame if it doesn’t