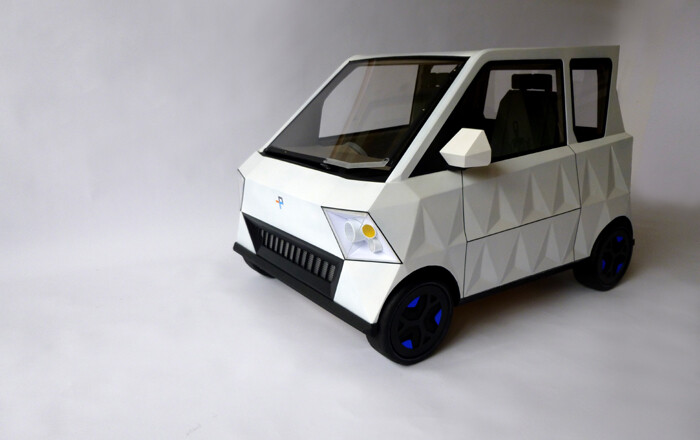 producttank_car01.jpg700×440 45.6 KB
Ok, so I’ve been playing around for a while with a car design and have finally got to a point where, whilst I acknowledge that it could be better, I wish to move on to other things. So I’ve made a 1/3 scale model and a short video here: 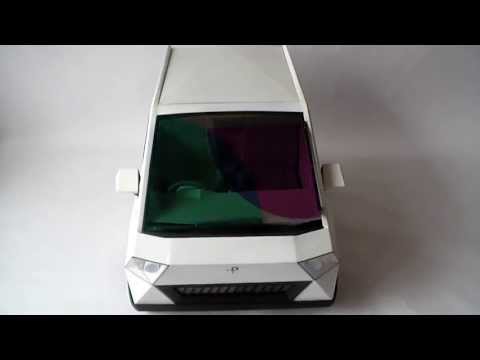 like everything I design, I only really know how its going when I take it into 3D as no matter how cool a sketch is, it always hides problems that I discover later on. Then I realized with this design (and this also usually happens) that whilst working on it, I came up with a significantly better idea, but by that time, I’m already 3 months in to my existing project. So I had the difficult decision of parking what I’d already done or seeing it through and (hopefully) learning a lot for next time. I decided to see it through. Just about everything that could have gone wrong did, the doors were supposed to slide sideways, but that caused too many problems with the model. There were measurement issues, so I had to cut the whole thing in half and expand it by 2ins half way through, the wood warped, flies and dust stuck to the paint job as it was drying, etc etc. So I’m not sure how I feel about it now, just happy to draw a line under it. I’ll post more making shots etc shortly. 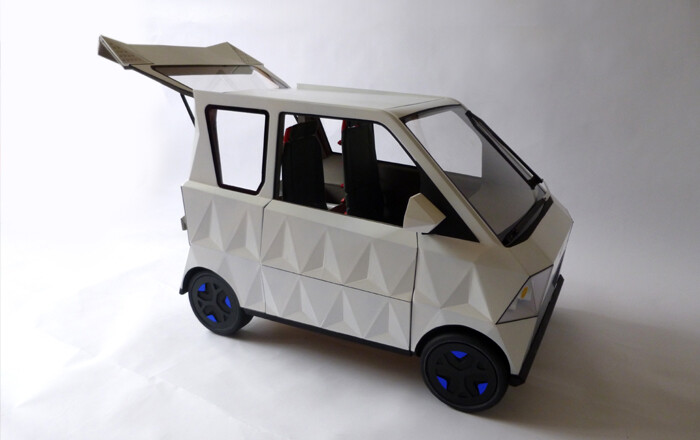 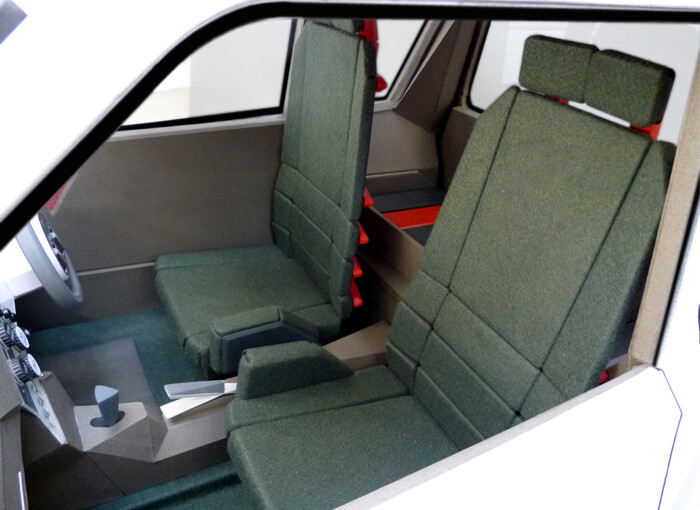 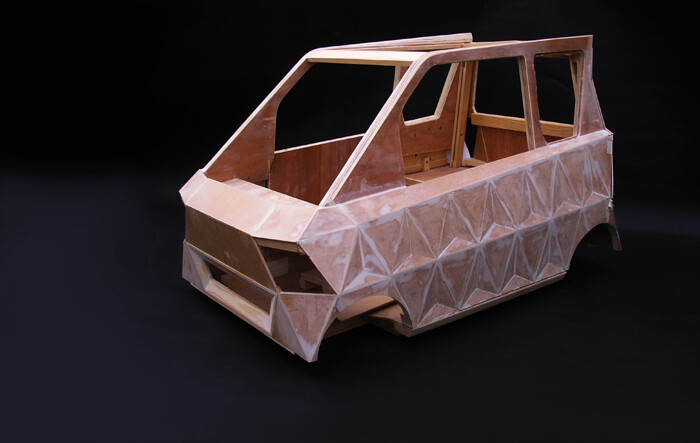 producttank carsneakpeak.jpg700×443 51.8 KB
This is the mdf, ply and pine carcass, before I had to cut the whole thing in half and expand it, I had the idea that I could remove the drive shaft/handbrake and gear area to make a narrower car, which would be more easy to maneuver and park, in reality, there wouldn’t be enough room inside the vehicle for larger people, so everything had to be widened. 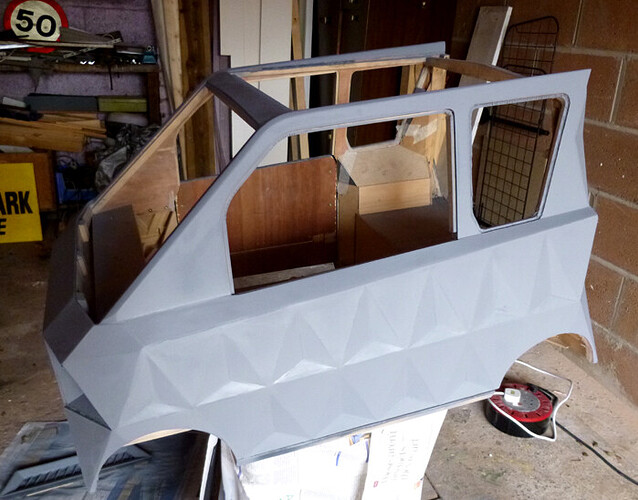 sneakpeak02.jpg700×548 100 KB
This was the first spray done in my garage, the temperature was exactly 0 degrees, because foolishly I was trying to do this in winter, I had a fan heater in the garage and had to close the door to let the heat build up before ducking in, laying down a coat and ducking out again. 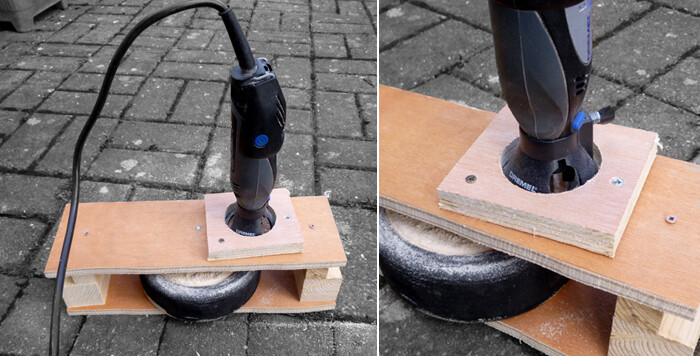 producttank_wheelmaker.jpg700×356 92.3 KB
I don’t own a lathe, so this is my rig for making the wheels, which are several layers of ply. The dremel has a tile cutting bit mounted in it. In this image the wheels have been covered in artists black gesso primer it helps me more easily see what material I’m removing. I use this on the whole car as it goes on thick, filling wood grain, dries fast and can be sanded. Most importantly it’s about a 50th of the price of spray filler/primer. Once cut, I wrapped the wheels in paper sculpted to make a tread, it doesn’t show in the photo’s though, which is a real shame - I should have saved time and added this in photoshop - lesson learnt.

The car interior is wrapped in paper - I found this a really good way (once you get the knack) of quickly covering surfaces to leave a good finish - something I will be doing more of in the future.

Another interesting PT project. And to think I was worried about the old skills dying out. 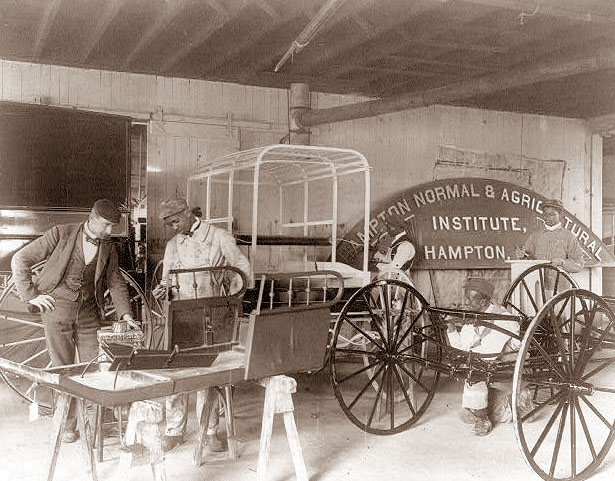 Wow, this is intense product tank! How many hours of model making went into this? It’s really interesting to see your model making approach pushed to this point in a design world were I’m so accustomed to 3D renders and animations.

I really like a lot of the details and features, the truck separating barriers are great. I was a little confused about the winch system though, seemed a little far fetched, but still intriguing. The windshield wiper seems like an interesting take, though the linkage bar between the two arms looks like it would be visually distracting, especially at the top of the movement when it pauses since it’s right in the drivers line of sight, albeit raises up. Seems like it could be visually distracting in a way normal wipers are not.

Did you have any functional thoughts about the facets on the side? Is it purely aesthetic or where you thinking of some kind of functional feature?

Hey choto - I never added up the total hours, but it’s been a lot of evenings and weekends over the last 6 months, mainly because lots of stuff needed redoing. Most tail gates just have a piston strong enough to lift the gate up. My thought is that if these have strong arms that can also lock, then a winch system can be used to lift heavy items into your car - there would have to be a load limit on it so that you didn’t flip the vehicle. Just an idea for a way to get heavy shopping from a trolley into the trunk.

I take your point on the wipers, with a bit of tweaking the pause could happen outside of the drivers view in the sun visor area, but even on the way up they might be distracting, although in production lots of things could be done to make the link less obvious, thinner, see through etc. The idea was to remove more water away from the window area as currently on my car when it rains the wipers just seem to push the water between each other- the left wiper pushes it into the middle and the right wiper to the left again.

The facets were originally to provide a really nice split line for a door idea I had that didn’t quite come off this time. They were also a reaction to all the flowing lines in most car designs. I was playing around with the idea of parts/all of a triangle being a side indicators as the side indicators on cars often seem like an afterthought and because of all the angles, they would be ideal for this. I could do something really cool and subtle with hidden door handles too.

In hindsight, if I had CAD I could have stayed inside in the warm - would have been sooo much easier

In hindsight, if I had CAD I could have stayed inside in the warm - would have been sooo much easier

No-CAD is pretty inspiring and I like the functionality. I really like some of your models like the kitchen and toaster as well. Pretty neat that you got there without the CAD route!

I do love making a physical model, but it can get me into a lot more trouble than doing a bit of cad on a computer would. Currently there are very few working pens in the house, because I’ve had most of them for either their springs or to use the tops as buttons in models. Each time I want to photograph or video my designs, I have to clear all the furniture from the lounge (our largest room) and lay boards down over the carpet and a big sheet of paper, so no one can get to the tv for a few hours, which causes all sorts of disputes. I have boxes of bits and pieces, materials etc (it will all be useful one day) getting in everyones way, but I can’t throw them out because I know I’ll need it as soon as its gone. The car is currently in the utility room because there’s no where else to store it, which is not going down very well as its in the way of the washing machine. But i built most of it on the dining room table, so no one could use it for anything else for about 2 months etc… Mind you, this is nothing to the grief I got when I made that kitchen!