Precision photoshop rendering processes- what works for you?

As a recent graduate I have found my method of working difficult to transition from school to real world work. The biggest reason being: my boss often demands large changes even at final stages of the rendering (maybe this is a flaw in infrastructure but regardless…

) I am wondering what has worked for others in terms of speed/quality.

TO BE SPECIFIC: I am speaking of achieving goal of a tight precision rendering. **not a loose emotion sketch

The way I am comfortable working now:
1.) Overlay on top of a sketch or photograph of a mock-up.
2.) Pen tool to block in the shapes
3.) Rasterize shapes
4.) Paint on top of shapes
5.) Flatten when appropriate

CONs
1.) Poor adaptability(after all of the shapes have been rasterized
2.) Time consuming
3.) Depending on the level of detail needed, layer organization (I have found my self going past 100 layers and shapes, difficult to stay organized even with naming/groups)

****As I final note I know that some people like to bring line work in from illustrator… but I have always felt that the black lines that come with doing that look too cartoon-like. ****

Thanks for the help in advance guys!

Depends what you mean by precision, Photorealistic? Personally never bother with photorealistic.

If any colours need to change slap on the Hue Colour adjustment layer.

Have no idea why your having a problem with rasterising layers… infact why are you rasterising in the first place its pixel colours not vectors. Also flattening why? If you want a file without the layer tree just save it as a jpeg

Post up an example JPEG so we can have a look.

My PS process is a bit different, I will come back to this post to comment in a short while.

I tend to clip mask many layers so that it is easy to go back and change things. I also frequently use smart objects instead of rasterizing which also helps when you have to make changes. If you are smart in your structure, you can keep your layers to a minimum and still allow easy changes later. What kind of changes are you be asked to do?

layer order would be:

Here is an example of what I mean by “precision.” As close to real as possible within time constraints.

“Have no idea why your having a problem with rasterising layers… infact why are you rasterising in the first place its pixel colours not vectors. Also flattening why? If you want a file without the layer tree just save it as a jpeg”

You must rasterize the shape in order to paint on it.

Rasterise what shape? Are you using shape layers?

Are your renderings typically using such simple geometric forms? If so, I would do most of that in illustrator, maybe a couple airbrush hits in photoshop, but that is it. Also, looks like someone could bang that out in 3d just as fast, if you are typically doing a lot of extrusions and joints like that.

Well, I dont mean to change the subject (if your are after “realism” or “precision render” as you call it, pardon me but your image as a render is quite bland) I tend to agree with “yo” if that’s a typical product you have to render; It will take no more than an hour or two to model it up on 3D, then whatrever your weapon of choice to “render” from auxpecker to hypershot etc .

With the obvious bonus of having the geometry ready for those last minute changes (shape, geometry details, perspective etc) even you can make screen shots to compose your render in photoshop. Perhaps including some 3D in your workflow could help.

The way I see it, there is no definitive workflow method, I personally use a mix of pretty much everything (3D, illustrator, photoshop) as long as you deliver high quality work on time.

I think that I know what you mean with regards to precision ie highly defined linework that lays the foundation for a rendering.
My workflow used to be rough sketch>Place in Illustrator>Open or Paste into Photoshop.
Now I use Rhino in the place of Illustrator to generate 2d linework, because of its robust tools and precision drafting tools ie fillets offsets, arrays etc:.

Used to be i would create a path of the general outine and then cut it up with overlapping work paths.
Now I just work at a high enough resolution, bring in the linework with minimal lineweight and magic wand the closed loops to fill in color, then add shadows and highlights on top. Flatten and paint over, continue to work it till it looks resolved and unified.

Like MasterBlaster, I use Rhino to create 2D curves because the tools are simply awesome, quick and precised. It gives me all the accuracy, such as radius and curve profiles. A few days ago I had to create quite a few icons and I did it really quick in Rhino instead of illustrator. It also helps to put things in scale. I will basically create the curves to prep it for rendering, save it as ai file then copy and paste onto photoshop for photo realistic orthographic view renderings. I don’t really want to show any example now cus most of them are for work.

For renderings that involve perspective, I haven’t had to do many of them, but I was lucky enough to attend a Scott Robertson workshop years ago. His tricks still stuck in my mind. I create paths and render all in photoshop. Not a big tablet user, so mouse works fine for me. This one was for fun. 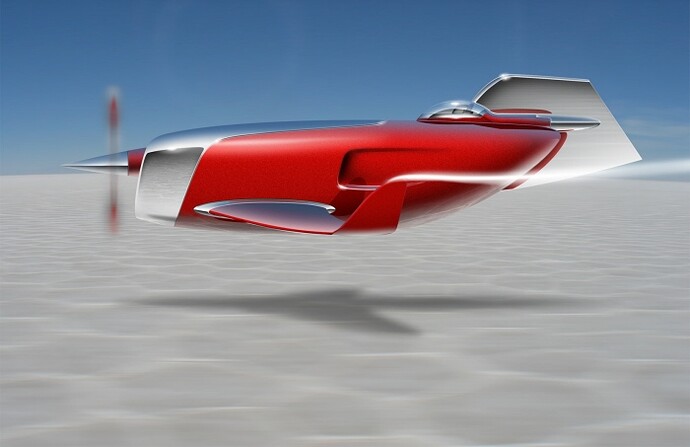 For this particular rendering, I didn’t plan anything. I started creating the body of the “thing”, then thought I should give it a cockpit and wings, then a propeller, and realized that it became a plane. so I didn’t even have an underlay for it.

Most of the tools I used are path tool, fill, dodge and burn and of course, air brush. I used the distort tool to create reflections of the ground onto the underside of the body. I used spin blur to make the props, then squeeze it to make it look like a side perspective. Otherwise, there’s no filter applied. All of the high lights and parting lines are stroked path with airbrush just like how you would do with traditional mediums. I didn’t use the emboss tool, they tend to look fake. I do use them for work for the sake of future changes.

I use illustrator because I am intentionally not precise. I make a lot of over lapping shapes that overlap. It allows me to make more fluid changes down stream. I set the line weight to .25 and 50% grey and you can barely see it once it is rendered, but it is enough to use the magic wand to make a bunch of selection masks and channels.

Using pathfinder, and the smart paint bucket with raw unclosed lines I can generate a lot of filled color variations, bring those in as individual layers in PS, do a highlight layer, then a shadow layer, and bam, you’ve got multiple rendered color variations.