potfolio site up and running

Hi everyone…I was finally able to get my stuff on the web (my wife is awesome!).

Please give me any and all feedback regarding the work.

It will be greatly appreciated.

I liked it, Nice and Clean

Just for some feedback, The arrows on your resume sort of lead me to the bottom corner and it kind of just ended there for me.
When I did get to reading it I noticed “Wacom” under programs. I wouldn’t call Wacom a program, you could however list “Digital Sketching” as a skill. Your site is really nice and clean maybe your resume should match that a little more.

that makes a lot of sense, the resume was styled before the site was made, and the site couldn’t be made to match…i should get on this

Hi everyone…I was finally able to get my stuff on the web (my wife is awesome!).
Thanks

Ahh crap!!! You shouldn’t have said that because now I’ll feel bad about critiquing the web design!

Overall I like the layout, it’s clean, simple and relatively easy to use. I’m not a huge fan of the floating window image clicking format, I’m more of a fan of the vertical scroll layout, but that might just be personal taste. I would change the format of your intro slides that have the brands so that the resolution matches the other slides, it just looks better if the window isn’t resizing when it goes to a new slide.

It took me a while to realize that there where the three extra tabs (Farnsworth, Blue Sky, and About me). I initially assumed the right arrow was just going to toggle between those four branding projects. I know it’s might be cleaner looking to only having 4 tabs on the main page but absent minded people like me might miss the other projects.

I think you’re selling youself short by having the first thing that hits your viewers in their face be the logos of a bunch of other companies. It looks nice from a graphic perspective, but I’d much rather see some nice well cropped teasers of your actual work, not just a giant Bodum logo that doesn’t really excite me or make me want to see the project.

I really liked some of the sketches for Bodum project, you had some nice little details and texturing that I think was completely lost because it was so faint. I’d take them back into photoshop and level them up so that there’s more contrast.

Also if you still have the prototype of the bag I’d take some nice studio style pictures of just the bag, look at some reference of how softgoods are typically presented and try to copy that. Seeing it in context of use is great but I was hoping for a money shot so that I could see how the final design was resolved. 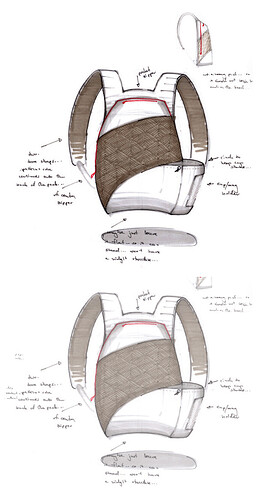 im gonna pump up the sketches for sure now…thats a nice comparison up there…sadly the bag is in storage somewhere and am worried about its current status but i will try to get it, thanks for that shooting suggestion…