What’s your typical process for making Keyshot (Fusion 360, etc.) renderings really pop? I’ve found that a simple tweak of Levels or Curves in Photoshop is a good first step, then maybe add a cast shadow, but I don’t really know where to go from there. I’ve seen some renderings where there’s a little noise and blur added to make it look sort of imperfect, more like a photograph, but I have mixed feelings about this.

it really depends on what your final use for the rendering will be. i was taught to look at images of real photo shoots to enhance my renderings, and to use photo shop to do the real time changes. one of the biggest tips i can offer is to do render passes (shadows, highlights, reflections, base) and then bring them into your post editing tool.

There’s ton to be done before rendering (modeling proper corner radii, adding part lines, creating realistic materials, choosing dynamic lighting/environments, etc.) to set yourself up for success. After that treat your renderings the same way you would a photoshoot. Set up your lights/environment to get all of the highlights, shadows, and reflections you need, even if they don’t all come in the same shot. Render a spectrum of options. Composite your shots, tweak your exposure and color balance, add or remove noise… Just like every photoshoot has different post-production needs, every rendering does, too.

Reverse engineering reference photos and renderings can really help, too. What camera angles are they using? Where are their lights? What kind of background do they use? Shadow, reflection, or both?

Finally, be aware of the telltale signs of the rendering program you’re using. The default options and environments on Bunkspeed/Keyshot, for example, tend you give you this grey, cloudy blob for a shadow that can be a dead giveaway of a rendering. Working to eliminate things like that will not only give you a more photoreal look but help to push you toward more dynamic images in general.

Use the camera raw filter in photoshop. The amount of control you get in one filter is amazing and you can save a series of settings and apply them across multiple images. Make sure you play around with all of the tabs. There are vignetter tools, camera lens distortions, tinting, a lot of options. 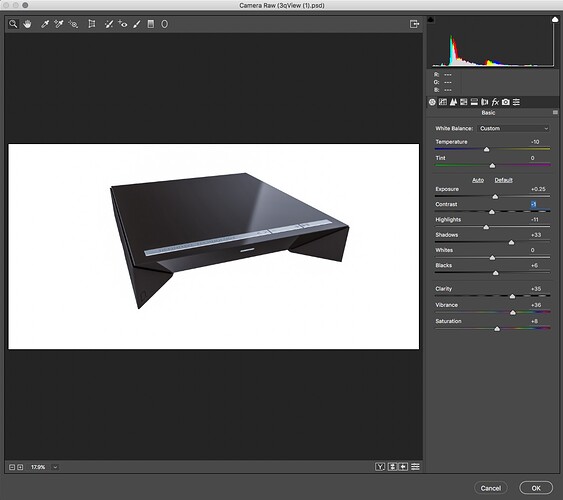 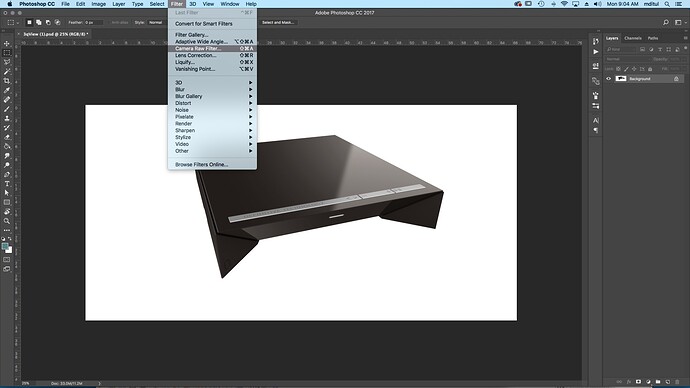 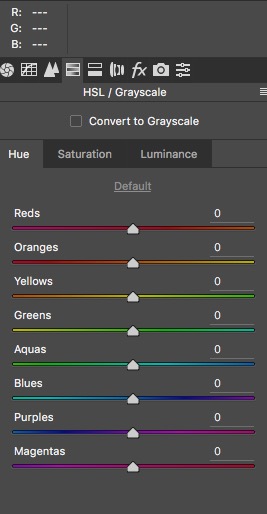 The best place to start is to remember no product shots come “out of the camera”. They usually involve hours of re-touching, compositing from multiple shots etc.

The same skills you’d use for art directing a product shoot can go towards renderings. Is the lighting coming across the different areas the way you want? You don’t always need to focus on getting every single detail perfect in one shot. Try to get the highlights and materials right, then composite them together if needed.

Rendering clown passes in Keyshot is a great tool to quickly allow you to mask and tweak specific levels on certain parts. Logo doesn’t have enough pop? - adjust it independently of the other elements. Screen needs that perfect white highlight? Add a gradient in photoshop.

If you want realistic looking bokeh/background blur, using a depth pass + the Camera blur filter is also a great way of achieving a really nice result without having to spend hours letting Keyshot calculate it. And you can manually control the level of blur you want rather than having to render again.

If you want realistic looking bokeh/background blur, using a depth pass + the Camera blur filter is also a great way of achieving a really nice result without having to spend hours letting Keyshot calculate it. And you can manually control the level of blur you want rather than having to render again.

I’ll second that point. Doing a depth pass and blurring in photoshop was especially useful in the pre-Hypershot days. I used to use Maxwell and Vray a lot, and learning that trick was a huge time saver.

Rendering clown passes in Keyshot is a great tool to quickly allow you to mask and tweak specific levels on certain parts. Logo doesn’t have enough pop? - adjust it independently of the other elements. Screen needs that perfect white highlight? Add a gradient in photoshop.

To elaborate on that one: clown pass is cool, but not necessary anymore. Keyshot introduced renderlayers that everybody should start using. Put your stuff on render layers and render straight into a .psd. Keyshot will seperate every element PERFECTLY. Especially when rendering with dof the traditional clown layer approach quickly becomes a pain in the ass. It is a huge time saver especially when combining multiple renderings together, because now it is as simple as a drag and drop of a layer from one photoshop file to another.

While doing the dof in photoshop via depth map is an option to save a few hours I wouldn’t do it unless you really can’t invest the time. The difference in quality between photoshop dof and rendered dof is big and every trained eye can spot it because it has some very specific glitches.

A simple trick I use almost every time is duplicating the layer, then set it to overlay and playing with the highpass filter.
It really helps with the “pop” and definition of the rendering.
After that just some contrast adjustment and possible adding a few gradients and highlights in necessary.

If you feel like digging a bit deeper into post-PS, Esben Oxholm has some really cool tutorials.

For example this one:

Tutorial: How to improve your renderings by amplifying the details - Esben...

Transcription: Hi everyone. Esben Oxholm here. In this tutorial I want to show you how to create the detail layer that you will find in the post processing in all […]

After you have set up your cameras, just as in a real photo studio you can set up the appropriate highlights. Use the HDRI editor and you can draw highlights directly onto your model where you want them to appear, then HDRI editor adds the lights appropriately in the environment map. Make sure to texture every part with large, high quality textures because the eye can spot undertextured areas. For added realism add some luminescent panels with colored light (warm or cold) to subtly illuminate the sides of your model.

Wow, thanks for the tips everyone! I don’t actually have Keyshot right now, but it sounds like they’ve added quite a few useful features recently. I’ve been doing all my renderings in Fusion 360, which lacks features like multiple passes and HDRI editing. Maybe I can figure out some workarounds.

Yo–I never thought to use the Camera Raw Filter for anything other than importing a Raw image, that’s awesome!

Bepster–I’ve never seen those tutorials before, those will really help take my renderings to the next level. I never realized how much you could do with textures in keyshot. Things like adding dust to leather or dirt on tire treads, I definitely thought would be hours in Photoshop, but I guess it’s simpler than that. Thanks for posting.

Ralph–Like I said, I don’t have Keyshot right now, but I’ll try adding panels directly in my Fusion model. I’ve done it before with mixed results. Never tried warm/cool though, that’s interesting.

Ralph, do you have any examples of using warm & cool light panels? Do you use both warm and cool in the same rendering? I’m not exactly sure what the desired effect looks like.

This engine rendering shows a blue lighting panel on the far side that especially on metal makes it pop.

Also the ring shows that principle, a warm green on the far side and a purplish red filling the shadow side.

For the engine, I would also look for a color to slightly fill those black shadow areas with say, a mars red or dark sand color - it is a matter of judging it per render as that one already has plenty of warm hues in it. 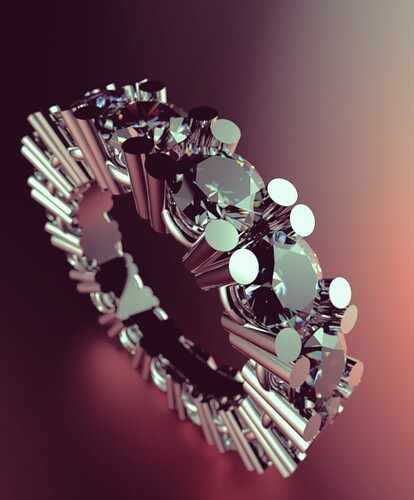 Also sometimes I use illumination arches above a model to create specific reflections that 1. show the form transitions and 2. add interest
You can always experiment with different colors, I like going for a Spielberg-type lighting with and strong cool and strong warm hues in the same image. 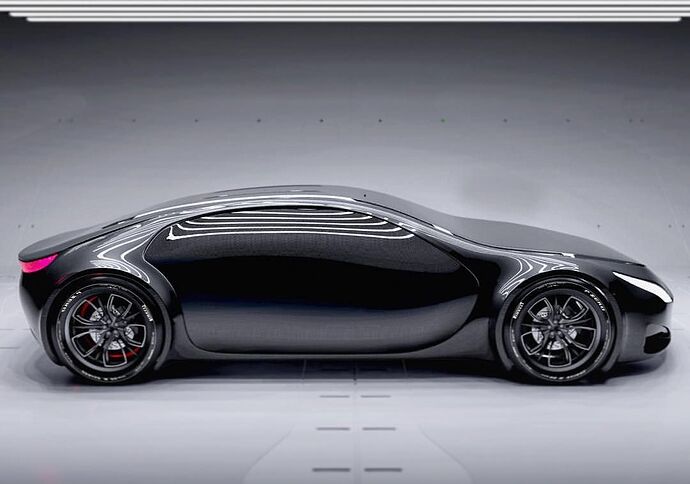