I’m trying to take a model of a person sitting that I’ve created in Poser 8 into Solidworks 2011 (student design kit) so that I can model around it. I’ve tried exporting the file as an .obj file then opening that in Rhino 4 and exporting as a 3dm file, then opening that in Solidworks but it’s giving me an error message in SW about meshes (cannot be translated and will be ignored).

Anybody got any ideas on what’s the best workflow?

I’ll be watching this thread, as i have tried many times and various paths and have yet to accomplish this. In the end I used Alias to bring my poser model in and worked within Alias to create the visual material i needed and to conduct my virtual user and ergonomic studies.

One work around is also that there are 3D pose-able people that have been built for SW, if you don’t mind that they look a little funny.

I’m trying to take a model of a person sitting that I’ve created in Poser 8 into Solidworks 2011 (student design kit) so that I can model around it. I’ve tried exporting the file as an .obj file then opening that in Rhino 4 and exporting as a 3dm file, then opening that in Solidworks but it’s giving me an error message in SW about meshes (cannot be translated and will be ignored).

Anybody got any ideas on what’s the best workflow?

Basically it ain’t gonna happen, you need to find NURBS people in Solidworks or some other format it can actually import. Or bring your Solidworks model into Rhino to bring them together. Or use extremely expensive and time-consuming Reverse Engineering software, which from my experience will still be lucky to produce an actual usable model that doesn’t need hours of cleanup to import correctly.

When you import any sort of mesh into Solidworks(far as I know this is what every “importer” for it does and I’ve spent quite a bit of time helping people get meshes into SolidEdge with the same issue) every polygon gets turned into a tiny trimmed plane(since SW has no concept of working with a mesh as a kind of geometry,) so unless you can keep the polygon count to maybe a few thousand it will bring your system to its knees even if it does import. And it’ll still not look very good compared to Poser because you’ll lose the smoothing trickery that makes a faceted model look nice on-screen.

Human models for Solidworks and other CAD Software

Download high quality 3D human models for solidworks and other cad software. Compatible with Proe, Unigraphics, Autodesk Inventor, Rhino 3D and others. These models are highly detailed and great for design and engineering reference.

thanks for the replies everyone. The SW student design kit has very limited save options and no IGES or STEP export which I understand is required to go from SW → Rhino so that method is a no-no sadly.

The cadhuman models look good but are way too expensive sadly.

actually, just tried creating an STL in Rhino and opening in SW. That has worked, albeit with the polygonal features you mentioned. However there were no errors and for sketching around, it should suffice

I was a regular user of solid works and a follower of solid works forum. Actually I was in search for another forum which discuss solid work issues as I have to deal them lot. Thanks for sharing the ideas and information.

Solidworks has a poly-count limit for STL imports. For a mesh of small enough size, it will successfully give you the option of turning it into a (ostensibly) knitted collection of NURBS faces (one NURBS patch per polygon). For any mesh that it can’t handle, it will just convert it to the extremely useless STL Graphics Body. For a mesh it doesn’t like, it won’t import at all.

I have successfully imported an OBJ into SW and converted it to a solid body from DAZ 3D. This required the Power Surfacing for Solidworks plugin. It worked extremely well and subdivided/smoothed perfectly.

Here’s a rendering of the solid model 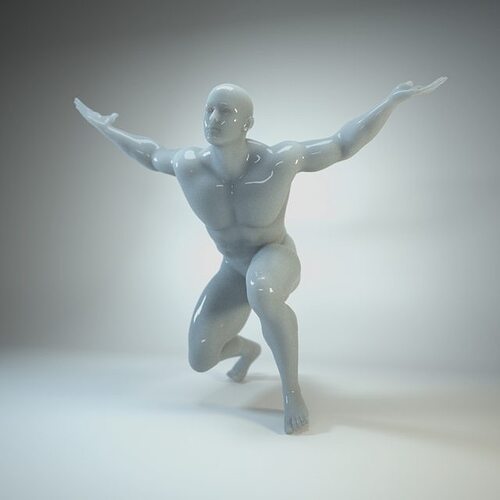 Get the evaluation version of T-Slpines for Rhino. Import the OBJ file and use T-Splines to convert to NURBS. Then bring in to SolidWorks as a STEP or IGES file. Worked for me on an incredibly complex female torso and head.

@eigenfactory: Here is a the a la cart that describes a few different routes to take. None of them are perfect and there are always trade offs.

Mainly just do to lack of SW themselves non-marketing of it, is that there is a mesh to NURBS conversion built into the program called “Scan to 3D”. Now let me state simply that this is not a magic be all answer to converting mesh to NURBS but at the very least you have an option and it works as such…

Direct Route 1…mostly automated with some levels of interactivity. The ending NURBS patch is a quilt and not what you’d want in the end, but it gives you some where to start. While in SW go to “Tools, Add-ins” and chose “Scan to 3D”. As you have the student version it should be there, if you are working in a company then they have to SW Professional. Once it’s turned on, then go to “file, open” and there will now be the ability to import meshes. There are some sliders and options to adjust how well the NURBS patch traces over the mesh but just wanted to put it out there that it is possible. This plug in is in now way at the level of something like a Geomagics or Rapidform but then again those programs cast upwards of 8K and above.

Direct Route 2…Power Surfacing is a new plug in for SW that allow for SubD modeling directly in SW. It’s a decent route at this point but needs a few more revisions of the software before I’d give it 100% seal of approval. It allows for a wide range of possibilities inside of SW that nothing else is able to match.

Indirect Route 1…requires that you have multiple programs for this it work properly. About 50% of this method is automated and will have a bit better ending result overall compared to the direct route. Take the .obj and bring it into Zbrush and use the Dynamesh to retopologize the mesh into quads. Then bring into Rhino and convert it to NURBS then bring into SW. This is going to be a heavy data set so you’re going to need some decent horsepower to start pushing this geometry around.

Indirect Route 2…Most manual and time consuming but will give the best results. Using Modo’s “Topology Pen” capabilities to trace over the mesh so that you can keep the edges you want. Then the paint the model as you would want the edges to be in SW and then, and this is the key part, using the “Power SubD” kit will bring it in clean into SW.

Indirect Route 3…T-Splines and Rhino has the capabilities to “Snap to mesh” which is pretty wicked. Overall the process is going to be manual but you’ll get some very nice surfaces to bring into SW.

These are only just a few different methods that I might suggest taking a look at. If you have any more specific questions post up…