You could get 4 or 5 bikes if you turn the rack so that the bikes face forward instead of sideways.

However, there are some issues with increasing the size of bike rack.

IOW, you may have to live with the solution at hand.

If those buses are similar to the ones in Vancouver, BC, there is also a couple of spaces inside just behind the front wheels for mobility scooters or wheelchairs. You could petition to have bikes parked there in addition to the front rack. Of course, the moment a disabled person needs to use the space, the biking riders may need to compromise and agree to get off and wait for the next bus.

That is an awesome collection of photos. The current system takes my about 10 secs. and works really well (minus the quantity issue) for all the safety reasons listed. If we turned it long ways and designed the rack to it slide like a drawer under the bus instead of hinging upward it could get bigger.

So about the foldies, even thought they are a trend for some people. They are not comfortable to ride. They are dangerous. And they tend to be inferior to a normal double diamond bike. I ride bikes, a lot. ( see http://www.illini4000.org for more info on that).

Another way to look at the Portland problem is that maybe you should suck it up and ride you bike the whole way. You can leave it at your office and call a cab or take the MAX (or streetcar) if it rains or something.

Apparently, a 3-bike rack has already been developed, and is being examined by Tri-Met: 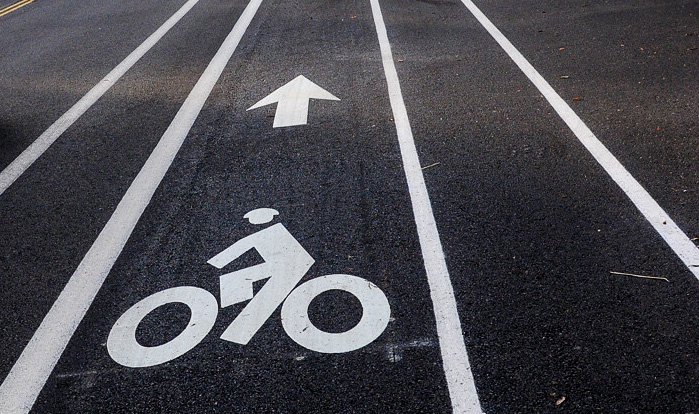 Are we the ones that made this topic too serious?

Not wanting to look like a clown is too stringent? Bicycles do not have stringent aesthetic standards, especially commuting bikes.
In fact, it’s just the opposite- bikes have stringent functional standards.
As I said before, the Mantis doesn’t meet any of them.
It’s not even a bicycle.

A folding bicycle is probably the easiest solution, but I would rather just keep riding my bike and skip the bus.

In its broadest sense, this topic should consider whatever people decide to bring aboard a bus that they consider to be a “bicycle” and for whatever reason:

I merely suggested something I would do as a possible solution and, instead, a couple people decided to jump in only to tell me what they didn’t like about my suggestion.
After which, I thought they should provide feedback which was a little more succinct.

When people start a topic, I treat them as if they are a client of mine and typically, I start off with something “outside the box”.

And, according the American Heritage Dictionary, the Mantis is a bicycle:

As such, it is well within the design parameters of this topic.

Idea that will never fly: Replace every seat with an electricity generating stationary bicycle to top up a battery in a hybrid design. Healthier passengers, too. Perhaps they can be swapped in and out or support passenger bikes.

I don’t know…maybe if there were some way to log your electric output, then maybe you could actually be paid to ride the bus.

Do the city buses have space underneath that could be utilized? I know that a lot of city buses have luggage space that will fit many bikes and that space is almost never used for luggage. I have heard of other places utilizing that space for bikes if the racks are full.

…and on the subject of folding bikes with 6 inch diameter wheels, aesthetics are only one problem. Try pushing a shopping cart through a potholed urban street and you will appreciate larger diameter wheels. Those ultra small wheel designs look like headers in the making. I hope that we will see a trend toward more full size folding bikes like the cleverly design IF bikes by Mark Sanders.

I notice that the IF Reach bike looks a lot like a Moulton, only with a URT and a trailing link fork that looks like the Moulton in reverse.

In any case, one problem with the racks is that they cannot handle many non-standard configurations, like bikes with 16" wheels or most recumbents.

As more people give up gasoline and start riding bikes, more of these unconventional designs will be in use. Already that is a substantial portion of the commuting cyclist that has been left out in the cold… in some cases, literally.

There’s also a video of the folding / unfolding of the Strida.

Portland should follow Barcelona, Paris and London… set up a "bicing’ system.

To use it one must acquire a yearly or weekly membership. Currently the network consists of more than 200 stations to lend and return the more than 3000 bikes distributed throughout the system. The stations are situated through the inner-city with a distance of around 300 to 400 metres between each one 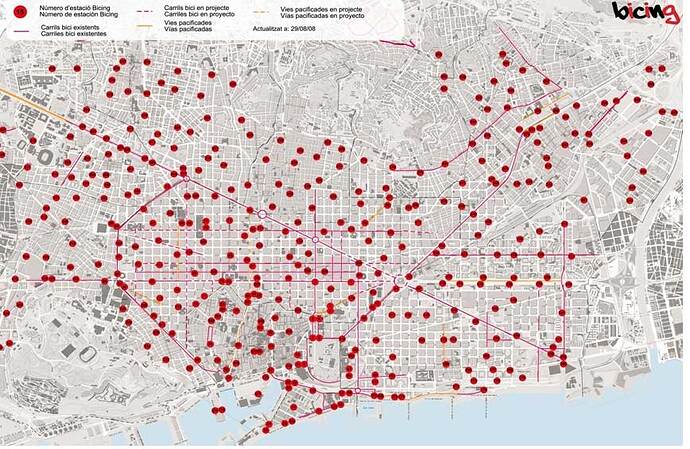 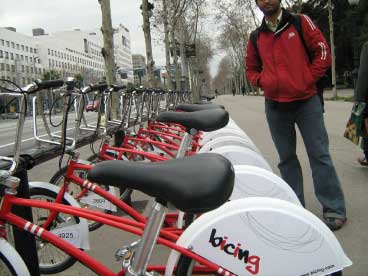 I just heard this morning that Montreal will have a rent-a-bike service. This is one week after the police started handing out more chicken-s**t tickets to bikers who go through red lights and listen to headphones.

“Luxury luggage for the bike enthusiast” 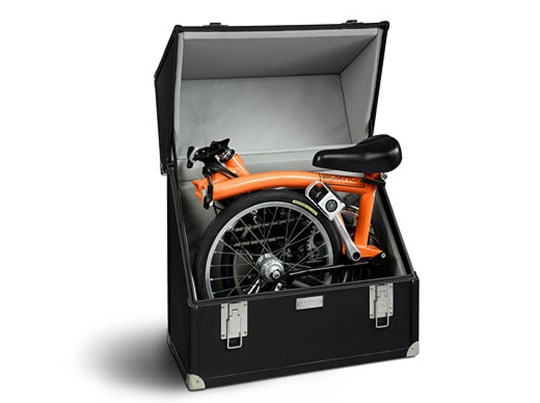