Can anyone suggest some funky ways of using/manipulating photographs so that they sit well on a predominantly white template. Most of the photos i want to use in my portfolio have alot of background imagery that i dont really want to show and i think just placing a rectangular photo image on a white background just looks tacky…do you know what i mean?

Sometimes the size of the photo just doesnt sit well on an A4 sheet. I was thinking of going the “torn edges” effect route but that seems kinda crap also!

Below is a quick exaggerated example to clarify (PS. its not my work…honest!)

You can fillet (round) the corners of the photos, you can align them with other text or objects on the same page, you can PS them so that parts of them use the same colour scheme or tonal values…or you can take better photographs.

Better photos would really help. The current photos are framed very poorly. Crop tighter. Try full bleeding a shot or two. For really bad photos get rid of the background in Photoshop. Either that or CAD renders and detail drawings for white space shots.

Cut it out. Cut your subject out of the pic.

I’ve also seen people cut their subject out and place it in a minimal vector scene-straight line work, real basic.

take a look a magazine layouts. they deal with the same issues. I prefer not to cut stuff out of pics, as it looks a bit haphazard, but instead go with good pics and a rational grid layout that syncs the photo box to other page elements. Also going full bleed can save a lot of headaches.

But ya, starting with a good photo helps.

Thanks for the tips. The photos in the image are not my work, i just grabbed them off the web to use as an example.

The problem i have is that i didnt get to take most of the photos because they were taken by our fitters when my displays (i work in retail design - the horror!!) were installed in store so i have to make the most of what ive got.

I tend to agree with rkuchinsky, cutting the subject out can look a bit dodgy, especially with retail displays as its better to see them within the context of the surrounding furniture etc.

What do you mean by “going full bleed”?..filling up the whole page with the image(s)?

Treat them as real life photos. A frame (stroke around edge), drop shadow, slight rotate and overlap is not very original, but effective and good looking (imo). Also extremely easy and fast to do in InDesign. 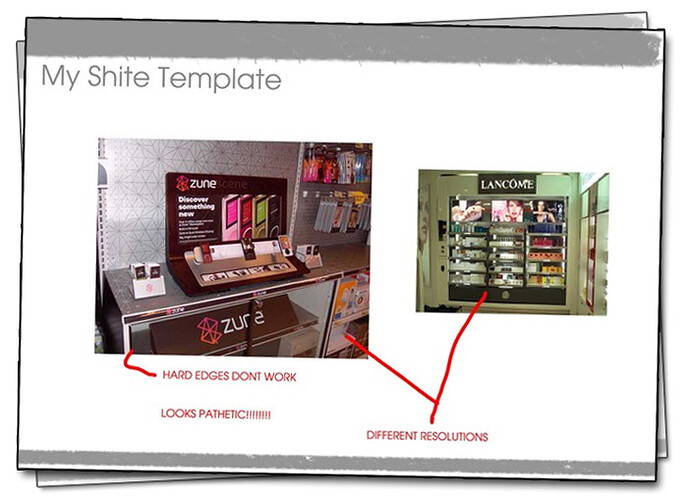 Can’t you go and re-take the photographs yourself?

I cant retake the photos as the displays are in stores all over the world…id need one hell of a plane ticket!

Following all of your kind advice i now have some ideas on how to move forward. Perhaps ill post it up when its finished for some critique.