CNN has a story on Porsche formally announcing a 4-door front-engined model for 2009 called the Panamera. This is the first I’ve heard of it, but evidently it has been rumored for some time and people have been coming up with their own concepts of what it would look like.

I knid of like the idea. It’s a little on the Aston-Martin, Maseratti, 612 Scaglietti side of things…just with extra doors. I bet suicide doors would look pretty slick [like in the lower pic]…kind of like the Maybach. 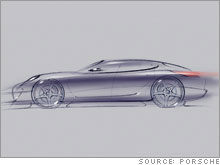 To be called the Panamera, the car will have four doors and four seats but will have a swooping, coupe-like profile. It will have a front-mounted engine driving the rear wheels. Pricing for the car, which is still under development, has not been announced.

The company expects to sell at least 20,000 Panameras per year, according to the announcement, which would make it the company’s most popular model by far. Porsche is currently on track to sell about 9,600 Boxster sports cars this year, about 14,000 Cayenne SUVs and about 8,000 911 sports cars.

The Panamera has been rumored for several months and alleged “spy photos” of the car have been published on the Internet and in some publications.

The car, which will be created on an entirely new fundemental architecture, will be built solely by Porsche and will not involve a joint venture with any other company. The Porsche Cayenne SUV was created in cooperation with Volkswagen which sells its own version as the Volkswagen Touareg.

“The Panamera is a perfect fit for Porsche,” said Dr. Wendelin Wiedeking, president and CEO of Porsche in a prepared statement.

“It has all the typical DNA characteristics of a genuine sports car,” he said. “In terms of performance, design, and driving dynamics, it meets Porsche’s high standards in every respect. Through this sports coupe we are making our customers a highly attractive offer in the top performance segment.”

Here are two of the “unofficial” renderings: 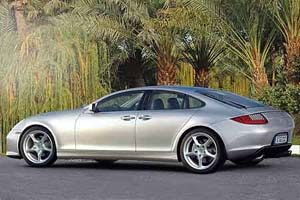 Hmmm… the 928 lives! How 80’s retro would that be if Katie gave one to Tom to drive around in? Maybe Rebecca will come out of retirement to set up “house” in his living room.

Hey who and the whatnow?

Anyway…I hope it’s not too like the 928. That thing had a fat ass and those Ford Tempo door frames were hideous. Aside from that not a bad car though.

Rather intriguing move on Porsche’s part to make this car.

It’s an interesting dream. Front engined Porsches once again. What would a new 928 look like? (the last 928, the s4, looked good, the ass was a little fat, but the details were great, and the engine was beautiful). What I’d like to see this move them into though, is a new 968 (944). That would be HOT!! and maybe they could keep the price in the $35,000 range to compete with the Z.

And, of course they’d have to offer some awsome checkerboard seats.

Oh MAN, if only I was in charge

While I think the new Caymenne is spot on, this 4 door concept may be the vehicle to flush the Porsche brand down the toilet for another ten years.

Friday, I picked up Action Auto-Moto. The French have a nice page of monthly auto sales in France and a few global snippets. The Cayenne sales have slid 25% in the US, in 2005. I think these non-coupes are diminishing the strong tradition of rear and mid-engined cars that Porsche spent 50 years building.

What has happened to the Mercedes designers - they used to be conservative but awesome - now they’ve started to put gesture into their cars and, to be frank, it sucks - the line across the side, along with the beltline looks like the recent Jaguar the Ford guys F’d up - leave it to ford to make a car look bad - and here the mercedes guys are copying them!

Can anyone tell us rockers how to post an image? I’m still learning this “magic box” and haven’t been able to post any images - maybe if someone tells me I’ll post some pics of all the hot groupies I had sex with last night - yeah!

Thanks for replying - I can’t see what you have to type in on your post - I can only see the picture - I’ve tried copying and pasting, and also the Img button, but they don’t seem to work for me, I know I’m just doing it wrong - do you have to reference a URL? Girls Girls Girls!!![/img]

-image must be online

-right click on the image, and select view image. be sure the image is alone in a separate window

-in you message hit the Img button

-type your message and submit

Hey thanks, lets see if this works!

-image must be online

-right click on the image, and select view image. be sure the image is alone in a separate window
-copy that web location
-in you message hit the Img button
-paste the location
-hit the Img button again should have a little * after it the second time
-type your message and submit
-Vualla!! Girls shoud appear Very Happy

Ooops… that was me above, I’m taking partial credit for the pantie show

Hey thanks, lets see if this works!

I prefer the pink myself. Thanks for sharing.