I just finished my latest project - pop up furniture and made a short video:

I submitted it to lots of blogs for inclusion, but no takers, maybe I’m way off the mark with this one - friends have commented that the ‘boing’ noise is annoying? I also used my parents as actors, not ideal, but I had to make do with what I had at the time. Please let me know what you think - all comments gratefully received. PT 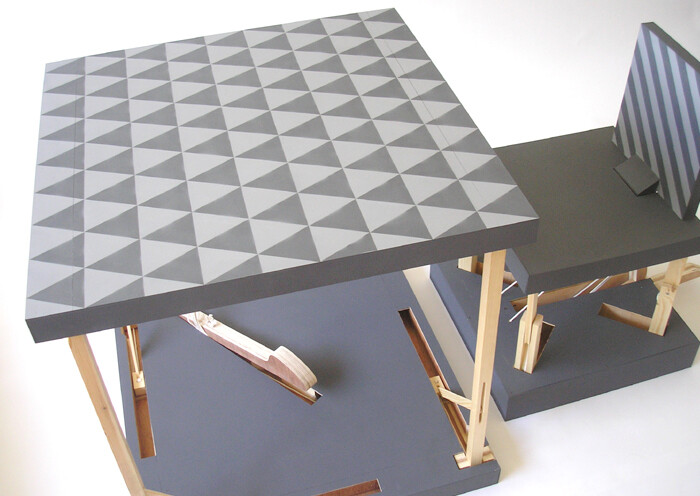 I agree though, the “boing” noise is annoying, and really detracts from the video - the concept itself is neat, but I also wish I got a bit more of the furniture being “used”, I guess? It doesn’t look sturdy, and maybe showing that it is so would be helpful. Also, why didn’t you use the fork and knife? That would’ve been pretty neat to see.

Unknown Target, thanks for the response. I’m thinking of editing the video to change the boing noise - maybe the original sound or something different. I’ll look into it. The fork and knife are not really useable as the hinges are not strong enough to withstand a lot of pressure and I didn’t want to get the models dirty cutting into pie. The chair and table are sturdy, but there is movement in use, because of the hinges. I’m around 12 stone and the chair holds my weight no problem, as I hoped was demonstrated at the end of the film when I sat on it and lifted my legs off the floor. The original idea was to tell a simple story about a guy who popped up his chair, table, knife and folk, then made a pass at a woman with a pop up flower and when they went off camera something else popped up - I was trying to inject base humour into it. Not having an actor budget, I tried to get my parents to help out, which didn’t really work. You’ve made some very useful points that I’ll take on board for version 2. PT

Just watched this with a bunch of other students, the video is terrible. The sound effects, the kissing, the “explicit” thing… this is not something that you’d expect to see with a design concept. It completely ruined it for us. Sorry for being harsh.

Just watched this with a bunch of other students, the video is terrible. The sound effects, the kissing, the “explicit” thing… this is not something that you’d expect to see with a design concept. It completely ruined it for us. Sorry for being harsh.

Tarn - it’s not harsh it’s good - I got too close to it and couldn’t see the proverbial wood for the trees - I think a definite edit/rehash is in order, that’s why it’s great to put things up on the boards and get some honest opinions. PT

Video quality aside, I’m impressed that you actually built this.

Impressed that you built all of this, shows some good mechanical aptitude and understanding at the very least.

The pop up idea is more intriguing to me for the sake of a video along than the items or the collection. ie - use them as devices to tell a story, making the highlight the story not the objects.
I would then use a new video to highlight your ability to tell a story and build mechanical models.

There are just too many things that are “off-taste” for the video to work, the graphics, font choice, verbage, and the sound effects being the primary culprits. All in all, I think your parents did an okay job, lighten up on them. After you explained the video, where you went back and sat and put your feet up, I understood what you were doing, but completely unnecessary for the story, it added confusion where I did not have any until that point.

The stuff is great, love the fork and the flower.

Thanks guys for the comments. Taking everyones advice, I have just redone the video and uploaded it to my website.

Yo - you’re right, but I’m out of budget on this one. No where near me/anyone I know, has a big enough room - uncarpeted and designerly etc. I was really trying to hide the undesignerly decor, rather than intentionally going for an Apple aesthetic. So to make this video, I bought a huge roll of white paper, which only just fits in the largest room in the house. Because it’s carpeted I had to buy a load of loft boards to make a solid surface. Then due to unmoveable furniture (fire place etc), the paper doesn’t lay flat, creating a problem with the background. Creating the products has been the simplest thing!!

This has been a very good project for me. I accept that the first video wasn’t good - in my head, if implimented the way I imagined, it could have worked…possibly, but I’ve learn’t that I’m not cut out for comedy.
I still think a narrative is the way to go, hence the new video. As IDiot said, it’s about using the objects to tell a story, not about presenting the objects as products. I wouldn’t have done any of this if it was a commercial project, but it has been about trying things, taking a few risks and learning by making mistakes. I’ve discovered my friends are (brutally) honest, a very good thing.

I hope the second video is an improvement? PT

Simple, to the point, a big improvement.

I still think there is an element of the story missing, why is he eating at a pop up chair and table?

…that being said, once again, nice improvement.

Wow, that is a great functional design. The 2nd video is better, needs some editing in video length though. Since its a pop up, obviously space saving, maybe you could start the video as a wall hanging or somewhere placed out of the way rather than from the floor.

In the video, the functional part is focused. Maybe you could add how easy is it to carry or how it is space saving or transportation etc.

That vid is much better!

I agree with IDiot though, the why, who, and where are not really compelling yet. The character was already sitting at a table when lunch sounded.

Some uses I could see:

I think the video is good to demonstrate the function, then just some still shots of it in situations might do the trick.

I still think there is an element of the story missing, why is he eating at a pop up chair and table?

Fair point and honestly I don’t really have a valid answer - story wise, ‘just becasue he can’ is not enough justification for me and I wouldn’t attempt to say it.

YO, I like the picnic idea. I’m going to have to roll with this video for now, but i’m keeping my eye out for a decent space and thinking about story improvements.

I saw this (after I started working on the project): http://www.freshwest.co.uk/collapsiblelazychair.html It was blogged about everywhere and you couldn’t even sit on it! What gets on the front page of core etc is a separate discussion, but if you really question my pieces as products, they fail, as they are more awkward than simple folding chairs/tables and when collapsed are actually trip hazards! I should have made something that is much more functional, so rather than pop up from the floor, it unfolds out of your hand and back into it again - saving bending down, which would be great for the picnic story idea and make telling a story easier as the viewer wouldn’t need to question functionality. I think my current pieces occupy somewhere in between the arty freshwest concept and a proper fully thought through product. Might have to go back to the drawing board! PT