There’s a company called Polymagnets down in Alabama that’s 3D printing magnets in order to change their behavior. They can fine-tune the force and reach of a magnet by changing its surface geometry. Their polymagnets don’t simply attract or repel, though, but can also act as springs and latches. I never really thought magnets had much room for improvement other than getting stronger by way of using a new material. This is truly a game changer.

Now do yourself a favor and watch the video. 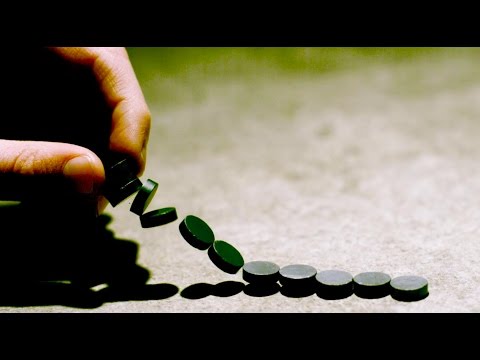 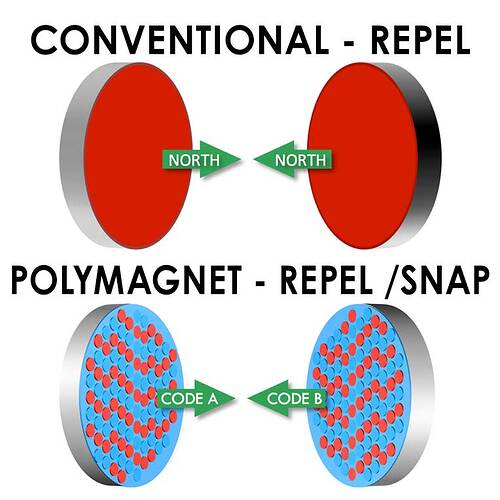 We have their demo kit here, it’s very interesting.

Haven’t had a chance to find a real world use yet, it’s not clear if they are able to do custom sintered magnets that also have these properties, or if they’re still just able to use those circular blanks. Obviously if you’re using magnets for a specific product design, a big 1" disc isn’t the best form factor.

How do you get a demo kit?

Don’t think it’s 3D printing process used to make the magnets. The host says they put in a blank magnet and the machine imprints on it. Only a guess but I would throw out that the machine ‘forces’ small areas/section/“pixels” to take on a given polarity. I have guess-ier guesses on how that is done - based on briefly seeing the machine in the video and my experience (de)magnetizing steel parts, also affecting magnet strength via heating magnets.

They do show magnets that are not round in the video as well. With the few applications they show and talk about, I can see round form factor being the most popular.

You can buy flexible magnetic sheeting (McMaster Carr) that has alternating magnet fields. Simply doing this will increase the attractive strength. I was told that you can find this with type of magnet common with refrigerator magnets.

I forgot about these polymagnets when designing a selector switch for an interactive - sort of reinventing the wheel. When reminded, didn’t have time to redesign the switch. I was utilizing the push/pull based on rotation aspect. The selector switch has a really nice (detent) feel that shouldn’t wear out and it always snaps to a selection, which was a user/interactive attribute I wanted.

My mistake by calling it 3D printing, but I did see that they just put in blanks and then print on top of them. And yeah, I agree. Their current form factor isn’t the best, but I think it’s just to prove the concept for now.

I went to their site and they advertise toward product designers, which I find kind of interesting…