Spray directly on polystyrene foam (Styrofoam).
Duratec StyroShield Primer is a polyester primer that is meant to be applied directly to polystyrene foam (also known as Styrofoam). > When cured, StyroShield forms a barrier that allows the use of conventional polyester laminating resins, gel coat, or other Duratec products. > StyroShield contains microspheres that insulate and protect polystyrene foam from the chemicals in polyester-based resins and gel coat. With StyroShield, low-cost polystyrene can be substituted for urethane foam in plug, mold, and pattern building applications. Spray StyroShield using an HVLP gun with a 2.5 mm or larger nozzle. Apply at least 20 mils of StyroShield to ensure complete coverage and surface protection. When in storage, the microspheres in StyroShield will float to the top and form a hard crust. Thorough mixing is required prior to use. When possible, store StyroShield Primer container upside down. Requires 2% MEKP. 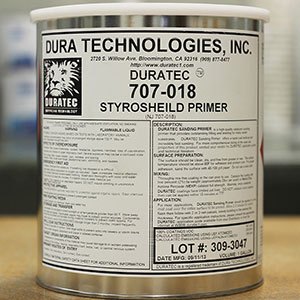 At $134 a gallon, it’s not cheap, but the cost would be more than offset by the use of CHEAP styrofoam sheet. Not to mention not having to deal with urethane dust. 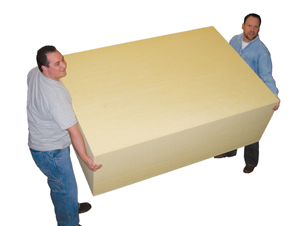