Places to visit in... Japan?

Hi, I’m off traveling in a couple of weeks, starting in Japan. I’ll only be there for two weeks due to budget, but want to see as much as possible. I’ll be spending time in Tokyo, Kyoto and Osaka, but am open to other suggestions, can anybody reccommend anywhere that’s not to be missed, design related or not?

I went to Tokyo for a few days and I would definitely recommend the Tsukiji fish market. Get there really early to witness the auction of incoming fish. I think we got there close to 6AM and missed the whole auction. Still it was a really really stimulating experience. 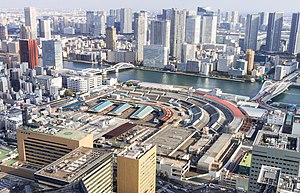 The Tsukiji Market (築地市場, Tsukiji shijō), supervised by the Tokyo Metropolitan Central Wholesale Market (東京都中央卸売市場, Tōkyō-to Chūō Oroshiuri Shijō) of the Tokyo Metropolitan Bureau of Industrial and Labor Affairs, was the largest wholesale fish and seafood market in the world. It was also one of the largest wholesale supermarkets of any kind. The market opened on 11 February 1935 as a replacement for an older market that was destroyed in the 1923 Great Kantō earthquake. It was closed on 6 Octob Th...

There is obviously a ton to do over there but this would be my one recommendation. Have fun!

I liked the city of Yokohama. I think that’s worth a visit too.

I went to Kamakura to see the big buddha and temples.

There’s a lot to see and do. Also I went to a warm spring and had a hot and relaxing soak!