I’m currently revisiting this project. The second image in this post is the new design direction. Please go to the next page for an explanation of my modifications. Any feedback is appreciated, as I’ll be looking for internships beginning this Monday.

T_his is my final poster for a Logitech sponsored project on remote surveillance cameras. While kind of tangential to the brief, the Logitech guys agreed that there was an opportunity in the direction I presented to them. Luckily, they also liked my final concept.

The product is based on two ‘sparks’ gathered from the initial group research phase. One pattern we noticed during research was the notion of a VIP, something with singular importance that small businesses would want to protect (safe, etc). The other spark was that one of the students’ toddler started playing with an existing camera when the student took it home to do research.

My product combines these two sparks into one concept: a mobile baby monitor (think a gadget like the Flip Mino HD combined with a baby monitor). It docks in the charging station at night, and during the day can be moved to additional docks that are attached to a play pen, baby carrier, etc._ 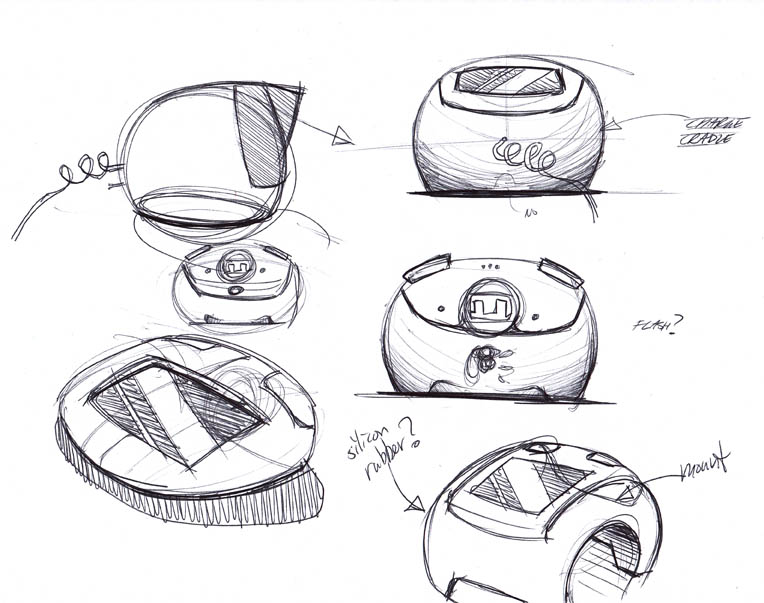 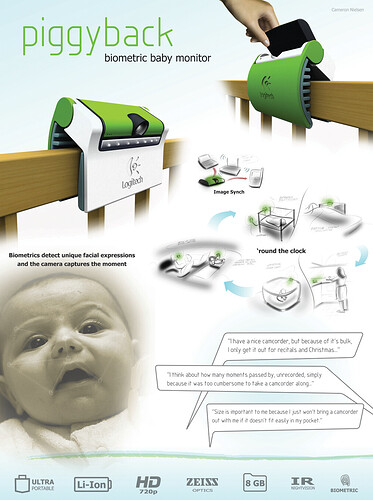 Does anyone have any thoughts now that they’re back from vacation?

Personally, I’m not a fan of the video baby monitor and adding biometric recognition to it just kind of makes raising your kid a little less personal. Personally, I use a wireless monitor that has just audio and it is more than sufficient. Everything you need to know about whats going on with your child you can hear. If you don’t hear crying, he’s fine. If you hear cooing and squeaking, he’s fine. If you hear crying, he’s probably fine but you’ll want to check on him. That’s about all you need to know. I know of products that are more like a mat under the sheets that can sense heartbeats (or lack of heartbeats) but that’s really taking it too far.


All that aside, I do like the functionality of the product. Particularly the clamping mechanism that would work with almost any crib/bassinet/pack-n-play. But, you mention a docking station for nighttime when it needs to charge… that’s when you’d need the monitor the most… so you might want to consider a power jack on the device. Of course, then you get into dangling cord safety concerns…

Thanks for the feedback NURB, I appreciate feedback from a parent since I’m not one yet. I don’t know if it was clear from my poster, but the reason for the video is so it can extract still images for preserving those kodak moments. These captures would supplement those rare times when the parent has the camera during the perfect moment. The biometrics would be used just like recognition & smile detection technologies found in current cameras and camcorders, rather than as a physical safety monitor.

The design in the image shows a hole for an AC power cord jack in the back of the cradle unit, but I guess it’s hard to see since I downsized the image too much. I figured since it would come out behind the unit it would be less noticeable and hopefully more out of reach. Is that a feasible assumption?

Thanks again for the feedback!

I think it is a nice concept piece.

(I wold edit the part in your post about Logitech people being suckers for flash, they might surf this, especially if they have a google alert set up)

My feedback would be:

Design:There are some hard edges on there. Babies tend to fall, gum on things, and generally bang around a bit. Some more generous radius on all corners, including around the lens, would be good.

Dock: where is it? What does it look like. We are seeing half the product here. Does it work with iTunes and iPhoto?

Layout: That kid looks terrified. It make it look like HAL / big brother is watching your fragile little baby. Swap that out for a happy kid. The baby is also the largest image. It would be more successful to make him smaller and in color (color match outfit to design) or larger and a watermark in the background. Right now you 2 key design images are about the same size, make one more dominant than the other to increase the appeal of the page… and I have to say the sketches could be a lot better. Kid stuff is frequently sketched in a style like this: 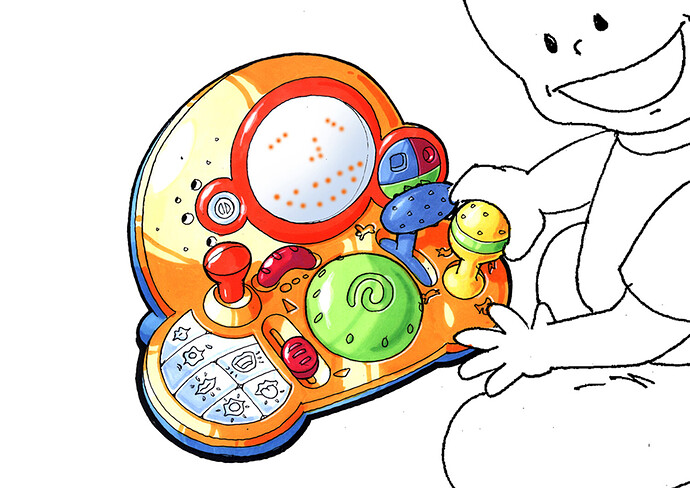 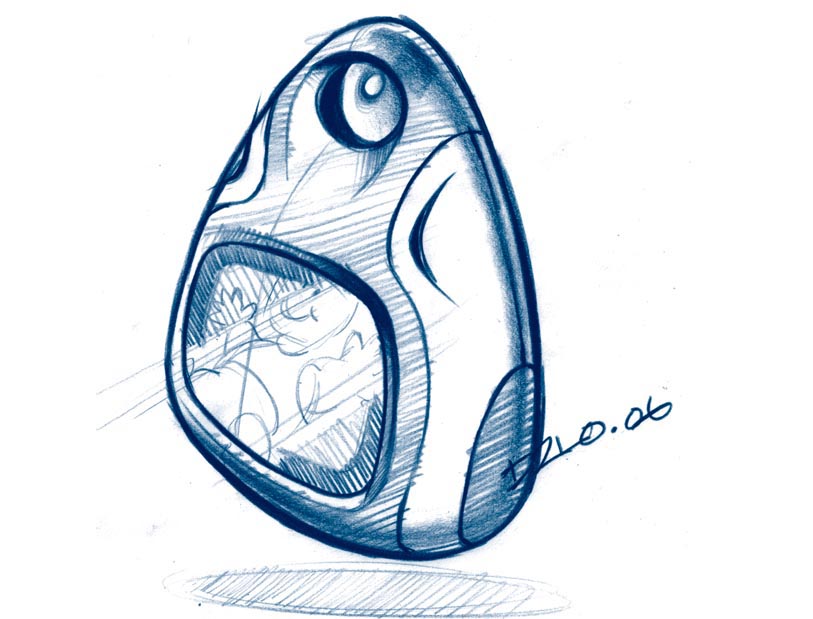 Ditto. I forgot to mention that in my post. Something like this kid from Veer would be more appropriate.

I still think there is probably an issue with having a cord attached to something hanging on a crib. Pretty much if its within reach, even through the slats, its probably a no-go.

Another thing I thought of, functionally: The picture perfect moments you describe usually happen in response to something you do as a parent for your child. Make a face, shake a toy, etc. When they’re lying in their crib, they do make sounds and cute faces, but I would imagine more rarely than you’d think. And a night vision camera or infrared camera image may not be the keepsake every mother is looking for (because usually when they’re in a crib, its dark in the room)

It was intentional that I went against traditional baby product design language. I wanted it to be more of a gadget than a traditional baby monitor product, and I thought using more techie aesthetics would communicate that to parents. Do you think that’s appropriate?

Also, the camera unit itself is the green object that slides in on top (like in the picture on the right). Everything else is the docking cradle where it charges at night. It synchs via wi-fi with Mac or PC when docked in the cradle.

Oh, and thanks for the layout composition suggestions. I haven’t plopped it in my portfolio yet so your feedback helped there.

Any thoughts on how to resolve the cord issue?

The nightvision would be more for actual monitoring than pictures, although it might be possible to turn it into a normal or BW picture in post-processing.

I probably will change the baby picture based on your feedback. The picture I have looks really good if it’s big - showing an expression of wonder and curiosity - but on a small scale, it does look like the baby is scared or unsettled.

Any additional suggestions or feedback?

Interesting idea, I used to work for a Juvenile product company and was part of several research efforts on monitor users and what drives them.

I have some quick thoughts for you if you want to use them to help refine your concept:

Anything that gave parents the perception of extending their senses without being obtrusive into their life was seen as a big success. Products that are placed as close to the baby’s environment, as what you are showing, were typically seen as more intimate and needed to integrate into the setting seamlessly.

“Nurb is right on the cord issue, its a big choking issue. A good rule of thumb is no cords within 2 feet of the child’s area. Fisher Price put out a monitor that attached like this that required batteries. Think about doing that with a docking station for charging. Just make sure to give it enough mass to believably power something like this for 8 hours (over night is the worst case scenario)”

Thanks so much for the feedback Alex, I really appreciate it. I really want to redesign the concept, but I’m not sure I understand what you’re saying about the cord and docking station. With my original design (the white clamp in the image) is the dock/AC charging station that plugs into the wall. The Green/Black unit is the monitor itself which has a Lithium Ion battery inside.

Are you suggesting a separate charging station that’s not part of the clamp?

Are you suggesting a separate charging station that’s not part of the clamp?

Yes a separate charging station would be my recomendation.

For an audio monitor the best battery life on the market tends to be 6 hours. Then tend to have less drain on them than a video monitor would. Having to replace batteries every day isn’t an option so that leaves you with charging.

Charging the batteries with an AC cord tends to be a headache for many users and so they rarely unplug it, using the batteries as a back up power source during power outages. The reason seems to be that once they unplug from an AC cord they have to dig it backout from whereever it fell every morning.

Having a docking station allows users to actually transport the product and have an easy charging setup to return the product to when its charge is expended.

I could not agree more with AlexT’s sentiments regarding a charging dock. The audio monitors I have (Graco) have a docking station and its the best thing in the world. That way we have one monitor for each floor and we can just take it where we need to. We never have to worry about finding an outlet.

Ok guys, I’ve finally been able to revisit this project. I had forgotten the advice you gave, because people I interviewed with weren’t able to see the same flaws you did as users. I’m happy to take this to the next level after so long.

NEW DESIGN: Since I originally named it ‘Piggyback,’ I decided to evolve the existing design into an abstract pig face to be more in line with cute, fun baby products. Different camera elements make up the face, and there is a touch screen LCD on the top of the unit. Per your suggestions, I axed the AC cord running to the crib, and now it’s connected to a charging dock for the camera unit. The AC cord immediately next to the body of the dock will be curled like a pig’s tail, a la an old corded phone. The mount will be a plastic (maybe flexible) piece that ties into the pig-faced camera just as well as the charging dock, but slightly different.

NEW BABY: I redid the intro page, so it’s less scary. You can review it on my coroflot link in my sig.

Please let me know what you think. I’d like to finish this up soon as I start looking for Winter internships this coming week. Thanks!